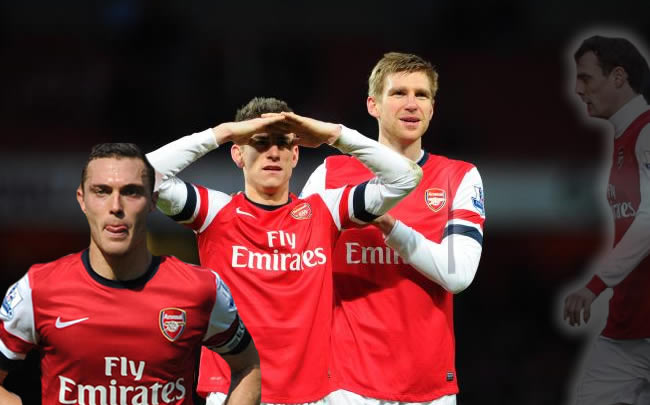 Let’s start the day with some good news and The Times are reporting that Nicklas Bendtner could be back in around 10 days.

I know, some people might not see that as good news at all, hoping a longer outage for the big Dane would force the manager’s hand in the transfer market, but I think first and foremost we have to worry about the players we have rather than the ones we don’t.

At this point of the season, with the FA Cup, the Champions League and the Premier League all still on the agenda, we need as many players fit and healthy as possible. I don’t really think Bendtner’s availability changes much in terms of our need for another player up front, and when called upon this season he’s done well.

Goals against Cardiff and Hull aren’t, admittedly, evidence that he’s the man to tear Bayern a new one if we’re struggling, but in the grand scheme of things they’ve made a positive contribution to our league position as it stands. He most certainly changed the game against Cardiff and, as things stand, remains the most natural back up to Olivier Giroud in the squad.

For all his high jinks and thumbs up in the training pictures, Lukas Podolski remains an unconvincing option in that position, and when you look at the fact the manager started Theo Walcott there against Sp*rs, I think that’s a sign that Arsene isn’t exactly convinced either. So, having Bendtner back sooner rather than later is a good thing, and the search for the player/players who might add something as we scrap for silverware can continue.

The focus remains on strikers and it’s been somewhat educational to see how some people simply have no understanding of the transfer market and the way deals are done. After Lewandowski officially signed for Bayern, people suggested to me that we ‘take him’ on a 6 month loan deal, as if it could happen in any universe that wasn’t blind drunk and hopped up on goofballs.

The general thinking is that any deal we might do will be a short-term one, but who is that player? Real Madrid seem to have ruled out a loan departure for Alvaro Morata, Berbatov is still hanging around wearing a pair of cut-off denim shorts, batting his eyelids and biting his bottom lip seductively, but beyond that I don’t know.

And that’s the point: nobody really does. The club, if they’re going to spend big on a striker to add to this team, will not do it in January unless it’s exactly the right man. You simply don’t chuck away £30m on a player you don’t really want, and you also have to weigh up the option of spending £10-15m on a second or third choice now which negates the possibility of getting the main man in the summer.

Anyway, I’m sure our scouts are scouting like Baden-Powell himself, tightening their neckerchiefs as they flit from stadium to stadium looking for someone to tighten their woggle. All on expenses, of course.

I have to say that for all the talk of a new forward, I hope the club are looking at the other end of the pitch too. The fact we have just three centre-halves is one that concerns me. The Theo Walcott incident shows you just how quickly things can go wrong. One moment you’re fit, the next you’re out for the rest of the season.

It’s not like there isn’t precedent either, remember Mertesacker turning his ankle on the ploughed field at the Stadium of Light a couple of seasons ago? Gone for the rest of the campaign. To be fair, a central defensive partnership of Koscielny and Vermaelen played in most games after that and as a team we only lost 3 times from the point of the BFG’s injury.

However, when there was an issue with either one of those two, we had Johan Djourou as back up. Now, we’d be looking at playing Bacary Sagna there which robs us of our best right back, and that could very well upset the balance of a defensive unit that has been so strong this season. A new centre-half might very well turn out to be akin to Volcano Insurance, something we never need, but we might also kick ourselves if we see rivers of defender melting lava flowing down London Colney way.

I would also say it’s easier to find a third/fourth choice centre-half in January than it is to get yourself that ‘world class’ striker. Somebody who can come in and compete without the expectation of immediate first team football. Anyway, we’ll see.

Speaking of Sagna, the issue regarding his contract continues, and the nuts and bolts of the matter is the money. Hardly a surprise. There’s a two year deal at the same salary on the table for Bac, he wants more money as this is likely to be the last big contract of his career. The prospect of a Bosman is an enticing one and I’m sure his camp have been in touch with clubs all over Europe and know exactly what’s on offer elsewhere.

He does want to stay though, apparently, and it’ll be interesting to see what kind of negotiation might go on. My thought is that stability is often worth paying that bit extra for and in Sagna we have a fantastically consistent player who has given everything for Arsenal in every game since he joined. Again, how do you weigh up the cost of increasing his salary against the cost of scouting, sourcing and purchasing a player of at least equal ability?

The other thing to bear in mind is that it would offer some solidity ahead of a summer in which we’re going to have to be pretty busy. It’s likely that our two back-up keepers, Fabianski and Viviano will go, meaning we need to buy there. I would be genuinely surprised if Thomas Vermaelen remained at the club given his current playing situation, and Tomas Rosicky is another who might look to pastures new. Adding Sagna to that list makes it a summer in which we almost have too much to do – especially if we’ve got to GO BIG on that striker everyone wants – so if we can’t find a financial common ground with the Frenchman it would be a real shame.

At the moment he’s perfectly entitled to look at his options, it’s now down to Arsenal to convince him to stay. I wish I had a good feeling about this but I fear the worst. He’s an important cog in the best back four we’ve had in years, and that’s something we really have to bear in mind when we make whatever offer we do.

Right, that’s that for today. Back tomorrow with an Arsecast ahead of a football free weekend because we don’t play Villa until Monday.

ps – I don’t really have a kingdom to give, but the point stands.