Yes, dear chums, it is that time of the week again. That is to say, what time of the week is it? Owing to an unfortunate misunderstanding between myself, the Duchess of York’s lady’s maid, three jazz musicians, five stone of gelatin and a rather persistent and inquisitive detective from the flying squad, I am laying low in, well, somewhere low. It’s not much fun, I can tell you, lying low, and my advice to you would be never attend a jazz party in Belgravia with the Duchess of York if you’ve had several pints of Jamaica rum and you know there is most likely to be ample quantities of both jazz and gelatin. And a policeman in attendance. It really was quite a pickle.

The reason for such bacchanalian scenes was The Arsenal’s delightful and ultimately comfortable passage to the next round of the Football Associations Challenge Cup. Coventry, bless their little hearts, was a charming little hamlet in Coventryshire until Mr. Hitler rained down the fires of hell upon it in the Second Unpleasantness, rendering it, in chronological order: Burnt, flat, dusty, horrible. So it must have been a wonderful day out for the dark blues of Coventry to make their way to a city that has both old buildings and indoor sanitation. London makes for an easy foreign destination for them, and only a slight moderation from their droning, guttural dialect is required for them to be understood in the big smoke.

And so with a certain inevitability, we smote them back to Coventry with a pleasing quartet of goals. First crack was Ponsonby with a lovely Orwell assist, then a Ponsonby noggin-bobbler from a Meatlocker flick-on. A very English goal! After oranges the young Gordon ‘The Mystic’ Sanderson emerges from the pine. And what a prospect this young lad is! Although we didn’t see his signature move, ‘The Ping Pong Parp’, a rapid, percussive move where he passes to himself, he impressed everyone watching and is a welcome addition to the 27 highly gifted creative midfielders The Arsenal currently have.

The tie was sewn up with goals from the Brigadier and St John Cousins, who followed up on a rebound from young Juarez, ‘El Cabo Primero’.

And so a ghost of football past is due to visit the Emirates. Liverpool FC, once a great force in English football, are to travel down for the next match-up. In an irksome move, they pleaded poverty, forcing The Arsenal to recategorise the tie in order for the unwashed to be able to afford it. If I was in charge of ticket pricing, I would have doubled the away prices, doubling them again for every request from their tawdry supporters groups. THE RUDDY CHEEK! Bollinger is not as cheap as I’d like it, but do I complain? No, I do not. Chiefly because the butler orders the liqueur, but also because that is what it costs. We hope to send them back with a flea in their ear.

Splendid news about the sponsorship deal with Mr. Ploomer’s Patented Athletic Trusses. Their emporium on Savile Row is delightful and I look forward to the new strip. The 150 million guinea deal should be put to good use, such as having hand-painted signs bearing the legend WE ARE RICH and GO BACK TO YOUR HOVEL and WE CANNOT COMPETE WITH THE WEALTH OF AN ENTIRE COUNTRY BUT WE ARE MORALLY SUPERIOR and so on. That would show the blighters. As it stands, we have lost top spot to the Vulgarians, currently fawned over by the obsequious Fifth Estate as some kind of all-conquering model army of physical and aesthetic prowess, rather than a cobbled together motley crew of mercenaries and hedge pigs lead by one of your granny’s friends from the bingo.

There is a long way to go. Chelsea were held at home midweek by Ironworks, who were playing the precise tactics employed by Mourinho on occasion. No wonder young Mata wanted to go. I have, through my secret service colleagues, obtained his actual resignation letter, attached below.

Until next time, stay naughty. 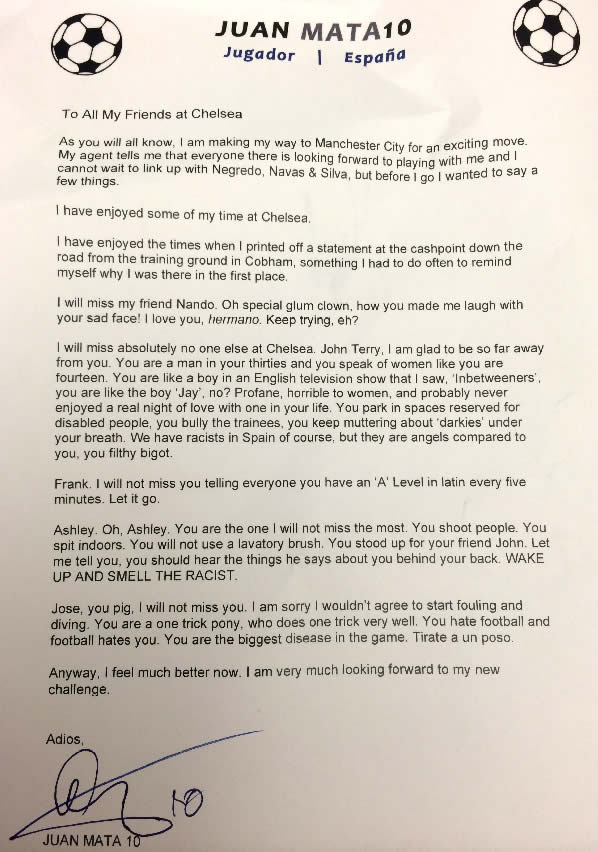