Is there ever such a thing as a fair result? Arsenal might have felt aggrieved having taken the lead on eighty-minutes only to see it cancelled out four minutes later, yet it was Everton who raised their game first and gave Arsenal a taste of their own medicine. Gerard Deulofeu’s rasping strike to make it 1-1 was probably just deserts for their dominant play. However, it was Arsenal who had the best of the chances and they could have won it with the last kick of the game when Olivier Giroud struck the crossbar. At the end, with both teams simultaneously frustrated and relieved, a draw was probably the right result.

For 35 minutes, we saw a performance unlike Arsenal; forced on the back-foot by Everton’s clever use of possession and hard press, they were unable to get into the game. Ross Barkley’s appreciation of space was a joy to watch – gliding in between Arsenal’s midfield and defence – and a nightmare to track. Mikel Arteta in particular had a torrid time getting close, but he was often exposed by Arsenal’s attacking players who were caught up the pitch trying to press, or put the team into trouble by spurning possession easily.

Unlike the team, who looked visibly stunned by Everton’s confident start, Arsene Wenger was calm, imploring his team to play more compactly. Of course, this was easier said than done and at one point, Carl Jenkinson came up to the touchline to get some guidance from his manager.

With Everton’s two full-backs playing high up the pitch, Arsenal’s back-four plus Arteta was repeatedly outflanked. What they did well was to take advantage of the gaps Arsenal tend to allow with the 4-1-4-1 formation, firstly by stretching the pitch wide then when Arsenal pressed, pass it between. Once they bypassed Arsenal’s attacking players, Everton frequently found themselves with an overload. Barkley would drift to the flanks, take Arteta with him, allowing Pienaar or Mirallas to roam inside and that would create space for the full-backs to bomb forward.

They did that repeatedly for half-an-hour or so but Arsenal were fortunate in that Everton lacked the final pass. For all Everton’s possession play, it indicates there’s a level beyond mere technique that separates the best, and Arsenal nearly proved that with the two best chances of the half. Once, which ended with Tim Howard saving at Aaron Ramsey’s feet was a move of beauty, the Welshman letting the ball run through his legs, Giroud touching it on and his shot well blocked by the goalkeeper.

The second-half was more even, Arsenal perhaps edging it but then Wenger made a triple substitution which changed the game. Tomas Rosicky and Theo Walcott, two of the trio who came on, were involved in the goal that Mesut Ozil eventually finished off. It looked as if Arsenal might hold on; Flamini had also entered for Ramsey but despite the extra protection, Barkley glided away from both holding midfielders, played a pass and when the cross fell to Deulofeu, there was a 2v 2 at the back-post. For a split second, Gibbs looked as if he was going to tackle – he didn’t. He should have, because Deulofeu, with minimal backlift, took advantage of the moment of hesitation to smash the ball into the net.

It’d be a bit unfair to find fault with Gibbs’s decision-making, or indeed, Szczesny’s failure to save a ball which was hit very hard from close range. Instead, Arsenal were probably a little frustrated having resisted Everton early on, they conceded when they were most dominant. Most galling would have been for Per Mertesacker and Laurent Kosicelny who, having resisted Everton largely on their own, were let down when the team finally tried to offer help. If this was a game which Arsenal finally convinced everyone of their title credentials, it’s because Mertescielny as it’s been dubbed, have confirmed themselves as the best centre-back pairing in the Premier League. 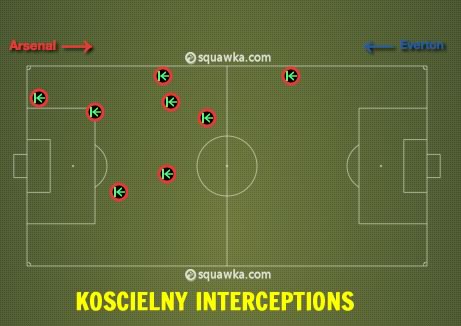 As a team, there have probably been better performances: backs-to-the-wall displays against Sunderland and Dortmund spring to mind while the 2-0 win over Southampton was a triumph for the collective. Yet, Mertesacker and Koscielny did it with little assistance as the ball constantly bypassed the midfield. Their reading of the game was outstanding, sweeping up cut-backs and crosses, and in particularly, their marshalling of Romelu Lukaku.

If Arsenal didn’t quite convince before as title challengers, it’s probably because it’s largely unprecedented for teams to win in style. When Arsenal went unbeaten in 2003/04, Sir Alex Ferguson derided the team’s achievements because they drew too many times. As if to assert his point, the next year Jose Mourinho’s highly pragmatic Chelsea side managed to surpass Arsenal’s points total and set a record in the process. Then there’s also Arrigo Sacchi’s stylish Milan side which, in his four years in charge, won the Scudetto only once (but was successful in two European Cups. It’s a record similar to Carlo Ancelotti who won only one league title in eights years with, but competed in three European Cup finals).

When Fabio Capello took over in 1991, he won three league titles in a row, playing a more pragmatic brand of football. Sacchi’s Milan were superior going forwards, but the demands placed on the defence was such that it was considered hard to maintain. Mertesacker and Koscielny’s performance against Everton and indeed the way the team as defended as a whole in 2013 has shown Arsenal might have a defence to match. 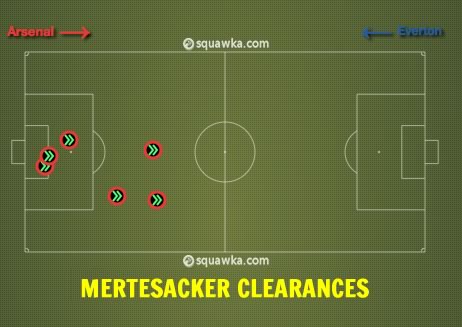 For Arsene Wenger, there are still a few of issues to solve, namely the way Arsenal’s 4-1-4-1 can leave Mikel Arteta exposed. It’s something which he accepts is a consequence of Arsenal’s game saying after the 1-1 draw that “we were a bit caught on the crosses, and on the flanks – that can happen.” Aaron Ramsey’s energy helps cover those spaces, but in this game, perhaps it would have been wiser for Arsenal to play in a more disciplined manner as they did in the game which started their wonderful form. To Wenger’s credit, he tried to correct Arsenal’s faults when he brought on Flamini to replace Ramsey.

When it works, as it did in periods against Everton, Arsenal’s play is a mixture of joy and ruthlessness that can be both intoxicating and devastating. Thankfully, when it doesn’t Arsenal have an outstanding defence to fall back on.