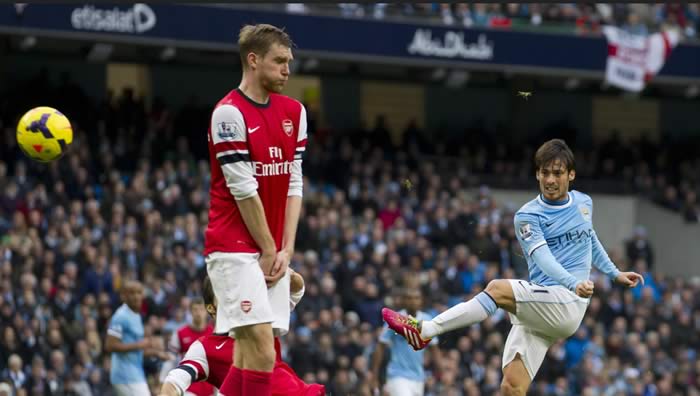 Afterwards, Arsene Wenger insisted that the schedule, 3 games in 6 days, was no excuse for Arsenal’s performance. He’s right, of course. It’s no excuse, but it was clearly a factor in our worst display of the season, and against a team with such attacking talent you’re always going to get punished.

You can look back on almost every goal and see a mistake, an individual error or something else that went wrong. I realise that’s true of almost every goal in every game, but it’s not every day you concede 6. Thankfully.

1-0: Koscielny went to sleep allowing Aguero to peel off the back of him and finish brilliantly. It was a great strike but poor defending.

2-1: After some nice Arsenal play, Nacho Monreal is wrongly given offside by the linesman. City come forward, Jack Wilshere isn’t 100% sure how to cover, it’s played wide to Zabaleta and Koscielny can’t get close enough to Negredo.

4-2: Monreal can’t prevent a Navas cross, Vermaelen fails to cut it out at the near post, Mertesacker isn’t in a position to do anything other than stick a foot out as Silva pokes home.

6-3: Gnabry makes a pass to nobody, City come forward, Milner takes a dive to win the penalty (and that kind of penalty award is a real bug-bear of mine. If the contact makes you fall, it’s a penalty. If there’s contact as you’re already falling, well that’s a dive).

When you consider that we had two goals ruled out for offside and the linesmen continually got decisions wrong, it’s no wonder that we ended up with the result we did. It’s not to suggest for one second the officials were to blame for our defeat – that was entirely down to us – but they played a part in what was a perfect shit-storm for us.

Tiredness, individual mistakes, and dodgy decisions. City are just too good for all of those things to play a part in a game. They’re ruthless in attack, and while you might think we could have scored more, I think we have to be honest and say that so could they.

The interesting thing about it though was that at 3-2 it was still a game. When Walcott curled home that second half goal, I thought we might have kept at them enough to get something, but the 4th goal just a couple of minutes later just knocked the wind completely out of our sails. It reminded me of this GIF. As soon as it went 4-2 it was like every player on the pitch realised just how tired they were, and there was no way back from that point.

I don’t suppose it was any coincidence that the freshest Arsenal player on the pitch was the one who made the biggest contribution. Two goals for Theo Walcott on his first start for three months is the one positive you can take from the game, but others struggled when they couldn’t point to midweek endeavours as a reason for their own performance.

I love Jack Wilshere but he had the midweek game off and he still stank the place out yesterday (and could find himself banned for giving City fans the finger). I know hindsight is a wonderful thing, but if the manager had taken him off at half-time and put on Mikel Arteta, there’s no way we’d have conceded 6 goals. I don’t mean it was all Jack’s fault, far from it, but with the Spaniard in midfield I think we’d have retained the ball a lot better. There may be an underlying fitness thing we’re not aware of there though.

He was hardly alone in playing poorly though. Olivier Giroud had one of those days and while Bendtner was unlucky not to have another goal to his name (a bad offside decision again), it’s days like this which really illustrate why we could use another striker. Somebody who, perhaps, can do something different to Giroud. Who can bring different qualities to the team. Maybe Podolski can be that man in the short-term, but even if shopping in January is hard, we should, at least, be looking to see what’s out there.

I think it’s also worth noting that Koscielny’s injury leaves us with two fit centre-halves. The cut looks bad but I can’t have been alone thinking that the way he was taken off meant something more serious, ligament or structural damage to his knee which would have kept him out long-term. As much as we might need another striker, we at least have options there. I think it would be completely remiss of us not to try and find a defender in January because, as yesterday showed, it only takes a moment for us to start skating on thin ice.

The bottom line is that our defensive success has been built on the team defending as a whole – that did not happen yesterday – as well as cutting out the individual mistakes. It’s like we made five months worth of those in one game. And when you’re facing a team with the attacking prowess of City, you can’t expect to get away with it.

I suppose the good thing now is that we’ve got 9 days to take stock, look at what happened, and put things right. In some ways it’d be nice to play somebody different than Chelsea, but they’ve got to dealt with at some point and it would be a real kick-start if we managed to turn them over at home.

It’s also worth remembering that despite the loss we’re still top of the league and that we’re not there by accident. In some ways we have to look at this game as something of a freak occurrence. Learn the lessons from it, of course, but not get so disheartened by it that it threatens to throw us completely off course.

There are, I think, still some concerns that when it comes to City, Chelsea and United, we’re not 100% sure of our own ability to get something from these games – what better way to put that right than doing Chelsea next Monday night? But until then, the legs need some rest, and we need to get back to doing the basics right and working hard as a team. Otherwise … well, you don’t need me to tell you.

Finally for today, just as word about people on the Internet who, for the most part, are great and contribute well to Arseblog and Arseblog News through their interaction and comments, on the site, on Twitter and beyond.

However, due to the fact that every idiot with a keyboard thinks they’ve got an absolute right to be heard, it’s now got to a point where almost the best thing about winning football games is the fact you don’t have to deal with the really unpleasant people who pop up every time you lose.

Frankly, I’m fed up of it and I don’t see why I, or the people who use this site, should have to put up with them. So from now on there is a zero tolerance approach to unpleasantness and bad manners. If you can’t understand why your comment hasn’t been posted or has been and subsequently deleted, maybe think about your username or the content of your message.

If it contains personal abuse to another commentator, the writer, or even the players and the manager, you can go find somewhere else to spout your shite. By all means talk about how X player didn’t play well but if, for example, you resort to name calling based on his nationality, his personal life or anything else, then forget about it. If, for example, your username contains a reference to an Arsenal great’s current illness, then I don’t want you anywhere near my website.

I know it’s a minority, but they’re loud, persistent and their self-entitlement is through the roof. Nobody should have to deal with such ignorant, angry people and I’ll do my best to make sure that happens.

Right, have a good Sunday, back here tomorrow.