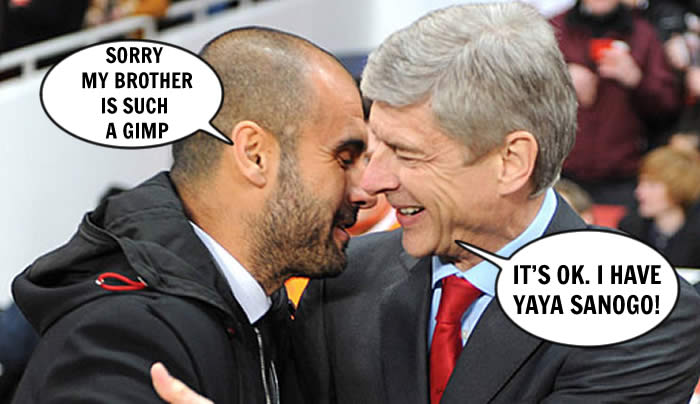 Morning all. It seems I am down with the dreaded black death/ebola bug that’s going around. I am bunged up like a Norwegian agent.

So, stuff happened yesterday with the Champions League and, as many had predicted oh so cleverly, we drew a big team. The defending champions, in fact. Bayern Munich of München, managed by super smooth Pep and home to such rapacious talents as Arjen ‘knee slide‘ Robben, Frank ‘side of a cathedral’ Ribery, and Mario ‘Goatse’ Götze, who can pull defences apart like nobody else.

Hey, it’s going to be tough, of course it is. Pep with his smart jumper, shirt, and casual cord/suede jacket combos, like a friendly professor, with all those good players to choose from. What a blend. Teutonic Tiki-Taka. And there’s the fact that they don’t lose many football games. And score lots of goals. And defend well.

Hopefully the weather will be warm enough so Arsene can match his cardigan against Pep’s sartorial style, the crapzippypuffa just doesn’t do it for me. But look, we’re not that bad ourselves, when you look at it objectively. Sure, we’ve just taken a bit of a pasting but that’s hardly representative of our entire season; and we’ve got some good Germans of our own.

Der Per, at the back. Magic Mesut drifting into channels, nonchalantly assisting here, care-freely scoring there. And Lukas Podolski who will dress up as a clown and take his one-man band kit outside the Bayern hotel the night before the game and play ‘What does the fox say?’ all night long just to keep them awake. It all balances out.

In seriousness though, we went there last season in dreadful shape. Having lost the first leg 3-1, just after being beaten by Blackburn in the FA Cup, we went to White Hart Lane, North London’s finest comedy club (they must do a good improv night there), and got beaten 2-1 by defending like … well, by defending like idiots.

It was a real nadir in Arsene Wenger’s time at the club. It was hard to see how we might avoid a sound thrashing, and the idea of winning the game seemed fanciful at best. Yet an early Giroud goal, 82 more minutes of defending for our lives, and a late Koscielny header put us within a goal of going through. Bayern were rattled and kept the ball down near our corner flag for the rest of the game.

In the end though, it was away goals which saw them through. 3-3 on aggregate tells you we should be respectful and aware of their quality, but not cowed by it. They might be a better team this season but, undeniably, so are we. The Champions League gives you a chance to experience those great nights which have been in short supply recently, I’ll admit, but are marvelous when they happen. Beating Barcelona is more fun than beating Olympiacos, for example.

Realistically, it’s going to be very hard to beat Bayern over two legs, I don’t think anybody’s in any doubt about that, but it should be fun trying and I’m looking forward to these games a great deal.

However, it’s also hard not to look at our schedule in February and March and not wince a little. Take a look:

That run at the end of March is almost criminally difficult but there’s nothing we can do but get on with it. I suppose it will bring into sharper focus the fact that the transfer window opens in just a few weeks time. As I’ve mentioned before, our depth at centre-half worries me, and if we can find the right striker at the right price, I really hope we do it.

I think we’re already beginning to see some fatigue creep into performances, and even though we’ve got Podolski, Walcott, Oxlade-Chamberlain and Sanogo to come back, you can’t help but feeling that a little extra boost in January could go a long way. I guess we’ll see.

Other than that little going on from an Arsenal point of view, so I just want to touch on the fact that last night Arseblog won the award for Best Independent Website at the FSF Awards. Sadly, I wasn’t there to accept the prize from podcast host and lounge singer extraordinaire, James Richardson, but it was collected on my behalf.

Which is the point of mentioning it. Something which started with just me in my house in Barcelona has now grown massively, and I want to say thanks to all the people who make the site what it is. Andrew Allen, Tim Stillman, Anam Hassan, Tim from 7amkickoff, Jeorge Bird, Hayley Wright and The Gent who all contribute on a regular basis as we try and bring you more and more content about the club we all support. Apologies if I’ve forgotten anyone, it’s early.

Tom, of course, tech badgers his way around the place making sure my fiddling and messing doesn’t self-destruct the place, and Tagadab for doing such a great job hosting us. It’s a team effort, and I hope the team will accept my thanks for all their help and hard work.

And as always thanks to you for reading, listening, commenting, following, liking and the support you give the site throughout the year. It’s much appreciated.

Now, I need to apply some kind of poultice to my entire head to try and shake this lurgy. Till tomorrow.