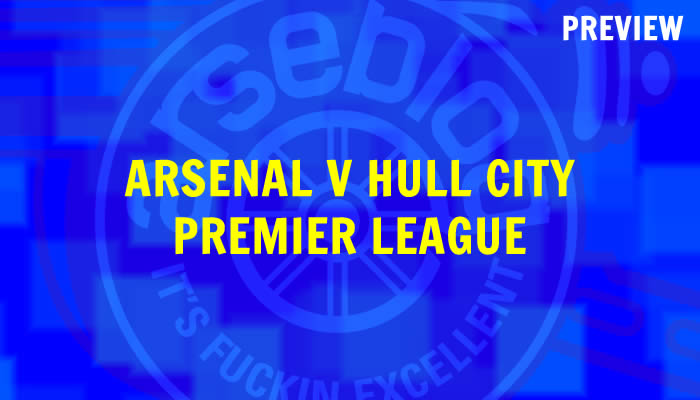 Premier League action tonight against Hull as we look to continue our momentum ahead of the schedule getting more testing.

It was a feature of the manager’s press conference that he spoke about rotation, and the need to manage his squad well. He said it’s something he does often, not just when we’re facing opposition like Hull, saying:

I rotate considering the level of fatigue. We have so many games that in some positions I will have to change; the full-back position is one that is very demanding. Central defence is a little bit less demanding on the physical side, it’s more on the concentration side.

When you play so many games of that intensity, we expect to lose one or two players. In every single game I will rotate. I try to limit the number because I do not want to disrupt the balance of the team, so I do that in every single game.

There’s one change forced on him as Bacary Sagna’s hamstring injury means a first Premier League start for Carl Jenkinson since the North London derby on September 1st. And I guess he’s hinting at perhaps giving Nacho Monreal a run-out too, with his comments about the full back positions.

What’s interesting is to see what he’ll do at the other end of the pitch. I think Theo Walcott will start tonight but whether that’s on the right hand side or as a replacement for Olivier Giroud remains to be seen. The HFB looked somewhat fatigued against Cardiff on Saturday, and with some serious defences to take on in the next couple of weeks this is the only real chance to give him a rest.

I suppose it all depends on the data, how close certain players are to that ‘red zone’, and all the other information that a manager has that we don’t. Sometimes it’s hard to understand a selection decision but they have a much more in-depth knowledge of how a player is feeling, if he’s carrying a little niggle etc.

We know there are plenty of midfield options for the boss to consider. Rosicky and Flamini could come in, he’s got plenty of scope to change things around, but what I like about this current crop is that we’re not looking at the bench or the replacements and thinking ‘Oh, I’d rather he didn’t play that bloke, what with him being a useless twat and all’. There’s experience and quality to choose from and it’s about finding the balance, I suppose.

We can’t have those players on the bench and expect them to perform if they never, ever play. At some point he’s got to put some trust in the depth he has, not just to win the next game, but to allow the team a better chance of winning the games beyond that.

As for today’s opposition, anyone who watched them against Liverpool at the weekend will know they’re capable of causing us problems. But gone are the days when we’d underestimate newly promoted sides, and handily that weekend win was just a timely reminder for us not to fall back into old ways. Just as Cardiff showed us they weren’t to be taken lightly with their draw with United.

This is, however, a game that you would expect to take three points from. We’re at home, playing well, scoring lots and conceding few. We’re a team that is – whether some pundits like it or not – involved in the title race and as such this fixture is one that a team with such ambitions ought to be able to cope with and come out of with a win.

We won’t be taking anything for granted, the new seriousness with which we approach every single game will ensure that the application and hard work that has gone so far to achieving such good results will be a feature of our performance again, and if we play like we have in the last few weeks then I’m confident we can do what’s required.

As expected there were questions at the press conference about potential January transfers, with the manager dismissing reports of a loan move for Alvaro Morata or a bid for Pato. He seemed to have transfer window ennui already, I can’t imagine what it will be like between now and the end of January when it closes again.

At this point I have to say I really don’t envisage us signing a striker. Lukas Podolski is almost back to full fitness, he could return to the squad next week which is a real boost, and tellingly the manager brought up Yaya Sanogo – ” … a striker we bought in the summer who can help us in the second half of the season.”

Yep, I’d pretty much forgotten about him too, but clearly Wenger hasn’t, and unless something pretty special comes up I just don’t see us making that January signing. Whether the options we have prove good enough to see us through to May remains to be seen, and I’ll admit they’re not altogether convincing, but time will tell.

Podolski, if he were to start ahead of Giroud, isn’t the back to goal player the Frenchman is, so it’ll be a measure of our adaptability to cope with that absence. However, the German is more than capable of getting goals. 16 last season during a campaign in which he struggled with injury and flitted in and out of the team because of that. If he stays fit between now and May, who’s to say he can’t do what’s necessary. Anyway, we will see.

I’m not sure what the situation with live blogging is for tonight. I’m sure there’ll be streams so check back later for a post with all the information. Or you can bookmark our default live blog page and updates will begin automatically.

Finally for today, if you’re struggling to find a present for the Gooner in your life this Christmas, here’s the answer. A limited edition, illustrated print of Robert Pires celebrating his goal against Aston Villa back in the 2001-2 season.

There are only 150 of these available (and they’ve been selling quickly since yesterday afternoon), so click here for all the info and the purchase link.