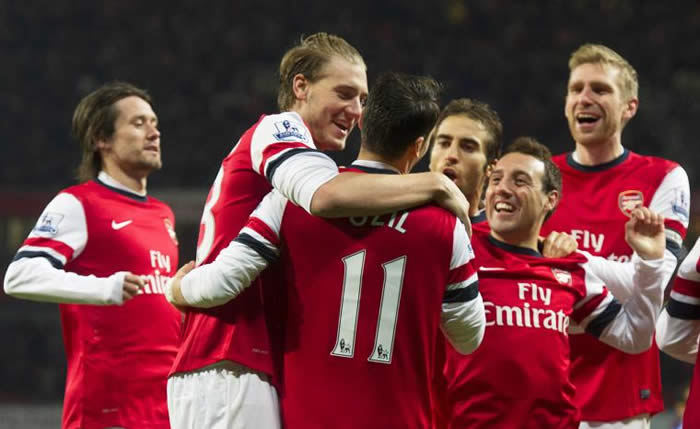 To say the news of Nicklas Bendtner’s selection was met with dismay on Twitter is something of an understatement. Not even that MTV show about those posh girls in LA had as many OMGs and I’ve never seen so many WTFs in such a short space of time. Some people even suggested that regardless of what actually happened, the manager should be sacked. Nothing like the calm serenity of a Twitter reaction, eh?

As it turns out, the manager had little choice really. It’s clear that Giroud needed some time to rest and with Theodore P Walcott still suffering the effects of illness, there was no other choice than to deploy the Big Dane. What he, and I suppose everyone else needed, was exactly what we got. A perfect Aaron Ramsey pass, an inviting Carl Jenkinson cross, and a well-timed run and header saw Bendtner score his first Arsenal goal since March 2011 inside the first two minutes.

What more could he, or we, have asked for? After that Arsenal bossed the game with tons of possession in the Hull half, some shooting chances, and almost a second for Bendtner. An Ozil shot was spilled by McGregor close to his near post, the Dane’s touch a bit on the clumsy side and he saw it go beyond the post. I suppose, if we’re being realistic/generous, that was the kind of touch you have when you’re a bit rusty.

Aaron Ramsey did his damnedest to add to his goal tally, forcing the keeper into a couple of saves, but the game itself was really tight. Almost like a game of 5-a-side at times, played in increasingly tight areas in the Hull half, but we still had 14 attempts in that first period.

Bendtner almost turned provider but Ozil’s gotta face the streets tonight after failing to connect properly with the cross from the right hand side, heading wide when he should have made it 2-0. He made up for it early in the second half by doubling the lead. Good play down the left involving himself, Ramsey and Monreal saw Ozil feed Ramsey, continue into the box where the Welshman’s beautiful reverse pass cut the Hull defence open, leaving the German the simple task of side-footing home at the near post. Well, he made it look simple.

It was almost 3 when Bendtner’s header was cleared off the line from a corner, and Cazorla was unlucky not to get on the scoresheet, but once we went two up you could see they knew that it was, essentially, game over. We’re a team that’s now secure in the knowledge that we can hold onto a lead and see a game out, and were happy enough to let Hull have more of the ball.

There were a couple of moments when lapses in concentration from Laurent Koscielny and Wojciech Szczesny might have proved more costly, but hopefully last night was the time for them to get that out of their system. Better opposition would have punished us more severely, and better opposition is exactly what’s on the horizon.

In the end it was a game that we were content to let run to its natural conclusion without expending too much energy. We did what was necessary and did it well, but there was always the sense that we could have stepped it up if need be. However, with such a testing upcoming schedule, you can understand the approach and it’s good to be able to play in such a controlled and sensible manner.

Afterwards, the boss touched on Bendtner:

We know that when he has the mind of the game, he has the qualities. I believe tonight he had a good game.

And the performance in general:

We had a good night because we had a good control of the game. We had some great technical quality and keep a clean sheet. We rotated quite a bit as well. We couldn’t take all the chances we created but overall it was a very convincing performance.

It means we stay top of the league, the three points important when all the other teams around us won including Everton who will come to town on Sunday full of beans after a 1-0 win over Manchester United at Old Trafford last night. But, more than anything, it’s good to see that we can rotate and rest players and not be affected negatively in the performance.

I thought Carl Jenkinson did well at right back and got himself a great assist, while Nacho Monreal’s performance at left back certainly gives Arsene Wenger some food for thought. Amazingly that’s his first Premier League start of the season. The regular cameos he’s been making have kept him sharp, but what you want when a guy comes in is that he makes it difficult for the manager to drop him again, and the Spaniard, for me at least, just has a bit more in the final third than Gibbs. A good problem for AW.

Flamini and Rosicky we know all about, and although one goal will hardly make everything all right in the world of TGSTEL, his strike, chances for another, almost an assist, and a performance that showed a willingness to work hard and contribute is all you can ask for. Let’s be brutally honest, the circumstances into which he came into the game were far from ideal – from any angle you want to look at it.

Most of that is down to him, some of it due to paucity of options on our behalf, but it is what it is and we’ve got to get on with it. I thought, all things considered, he had a pretty good game, and while I’m not suggesting anyone go out and build a shrine to the man based on last night, it seems counter-productive to snipe when he’s made a positive contribution. The people who said he’d never score when his selection was announced fluidly changed their point of view to ‘Well, it’s only Hull’, but it was only Hull for Luis Suarez not to score against just a few days ago.

We’ll have Giroud back in the side for the weekend and Podolski is back in training and in contention soon, but frankly the more options we have the better and in a season when most things are going pretty well, I’m not going to get hung up on a petty details after what was another positive night for us.

Till tomorrow, when we’ll be Arsecasting. Until then.