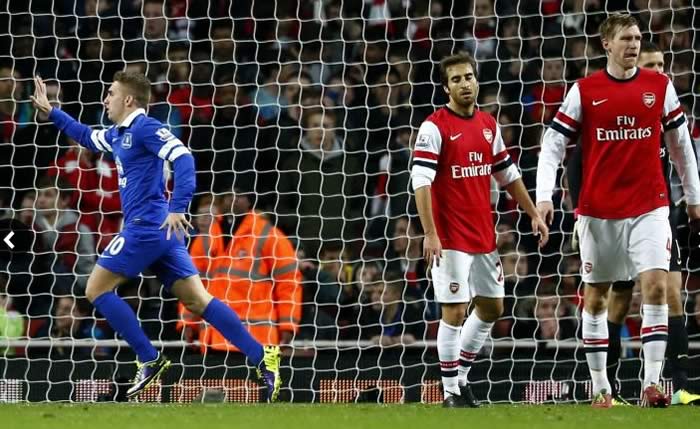 So, the 7 point thing didn’t come to fruition, but a point against very good opposition ensured we extended our lead at the top to 5 points

Like others have noted I thought Everton were the best team we’ve faced in the Premier League this season (good practice, you might say, considering our next two opponents are probably better than them). The opening 40 minutes was unlike anything I’ve seen this season from anyone. Not even Dortmund dominated the way Everton did in the first half.

But, while they had most of the ball and played the game in our half, they didn’t really create anything clear cut. There were balls which didn’t quite come off, but the threat of Lukaku was well and truly contained by Laurent Koscielny. We simply didn’t get a hold on the game at all. Simple things, like 5 yard passes and basic control to provide us an outlet when we did work hard to get it out of our half, let us down, allowing Everton to pile on the pressure again.

Still, in the final minutes of the half we burst into life, creating a couple of one on one chances which saw Tim Howard come out quickly to deny Giroud and then Ramsey. I wouldn’t criticise the finishing as much as credit the goalkeeping, but at least we showed something before the break.

We were much more in it in the second period, starting brightly, taking shots and creating openings. Jack Wilshere cut one back for Santi Cazorla but he couldn’t get any power in the close range header. Howard again had to make a smart save at his near post from a Ramsey volley.

Szczesny had to be alert a number of times as Everton tested him. One in particular from Barkley swerved viciously but came about when Wilshere simply let a ball run across him on the edge of our box. A lack of decisiveness there could have proved more costly and was symptomatic of our problems throughout.

If it wasn’t quite two heavyweights slugging at each other, it was certainly a much more open and even game than in the first half. We brought on Flamini, Walcott and Rosicky for the labouring Ramsey, Wilshere and Cazorla, and Flamini almost put us ahead, fizzing a shot just wide of Howard’s far post.

Szczesny again denied the visitors, keeping a Mirallas shot out before the cross back in from the subsequent corner deflected to an unmarked Distin at the back post but he headed over. Luckily for us, because moments later we were ahead. Rosicky crossed for target-man Theo Walcott who nodded it back across goal. It looked as if Giroud would score but he was taken out by a clever kick from Jagielka, however Mesut Ozil was on hand to finish high into the net to make it 1-0 to Arsenal.

With less than 10 minutes left you’d have fancied us to hang on, but there’s a reason Everton have only lost one game this season. Their footballing quality is part of that, but they’ve obviously got some real character in the team too. And, in Gerard Deulofeu, a youngster capable of the unpredictable and quite special.

Arsene Wenger spoke about regrets after their goal. I’ve seen people blame Szczesny, which to me is ludicrous. It was an outstanding finish which gave him no chance. Perhaps Gibbs could have done more but he was pretty tight to the player and the shot was hit so quickly and with little back lift he could hardly react. There are times when you have to take your hat off to a moment of brilliance and not apportion blame to one of ours.

However, looking back at that move I can’t help thinking that Mathieu Flamini missed the chance to stop the move before Everton got the ball wide. Twice he had the chance to stop Barkley, and while it might sound cynical and unsportsmanlike, isn’t that what we’ve loved about the Frenchman since his return? Take him out, take a yellow card, and let them have a speculative 30 yard free kick which, more often than not, is not going to cause any real danger.

Still, it’s hard to argue that Everton didn’t deserve something from the game, as disappointing as it was to concede to soon after scoring. In the end we might have grabbed the three points but Giroud’s fantastic 25 yard shot mashed the corner of the post and the crossbar deep into injury time. It was a great effort, and although justice can go take a running jump, it meant the outcome was, in the end, the fairest one.

You have to give credit to Everton, they played well and they always looked dangerous. We played against a very good side, in the end we’re a bit disappointed to get caught back with a 1-0 result but overall it’s still a point. It shows you that it will be a tough Premier League and the consistency in the end will be rewarded. The consistency for us is down to us to keep this attitude until the end of the season.

Of course when you’re 1-0 up at home with just a few minutes to go, it always feels worse to drop points, but when you look back at the game as a whole they played well enough to get something from it. It was interesting that it was their midfield that was the most threatening. The gigantic striker was the area people thought we might struggle – having had our travails against that kind of player in the past – but Koscielny, in particular, and Mertesacker dealt with him perfectly.

Our ‘problems’, such as they were, came from somewhat under par performances from our men in the middle. I thought Wilshere was off the pace from the start, Ramsey had, by his standards, a very quiet game and it was no surprise that he was taken off. I think he’s beginning to feel the effects of a long season up to now, and while we have to hope he can recharge those batteries, it’s time for others to pick up some of the slack.

I thought Mikel Areta found himself slightly overrun at times with Barkley rampaging through the lines, and what a talent that boy looks. Giroud battled hard against a very experienced and tough centre-half pairing. Santi tried hard, kept chasing Coleman down the left hand side but failed to produce in the final third, and Ozil’s goal is what makes him a £42.5m player. The finish was almost nonchalant; the chance, given that the ball was behind him, was more difficult than it looked.

I think it’s a game that will give the manager some pause for thought ahead of Wednesday night in Naples. With Man City away on Saturday, I really do think he’s going to have to rotate a bit in order to give us a fighting chance in that game. There were some players who looked heavy-legged and another 90 + travel isn’t going to sharpen them up any. That, however, is something we can discuss over the next few days.

All in all, I think that was a good point in the grand scheme of things, and the fact that our ‘complaint’ this morning is that we’re only 5 points clear, not 7, tells you everything you need to know about how this season has gone thus far.

Finally for today, the winner of our Warrior boots competition is: Chris Kent. Well done to you, I’ll be in touch to get your details.