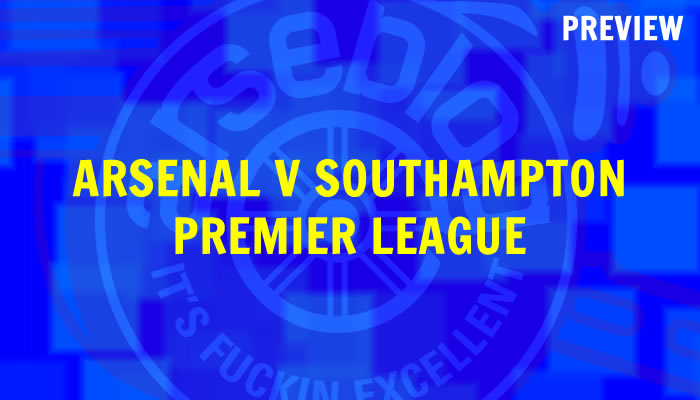 I think it’s fair to say the Southampton we face today are a very different proposition from the one we beat 6-1 in the early part of last season.

They were roundly criticised for sacking Nigel Adkins and bringing in Mauricio Pochettino, but this is one of those times where it looks as if the people running the club have a very good idea of what they’re doing. It’s first against third today, a situation not many would have predicted at the beginning of the season, and it will be a real test of our qualities to take the three points.

Their league position is one thing, but that Southampton have only conceded 5 goals in 11 games tell its own story. They work extremely hard, are incredibly disciplined and will press us relentlessly when we have possession. I suspect some patience will be required.

To be fair, their schedule hasn’t exactly been as difficult as it might but all the same they’ve beaten Liverpool at Anfield, drawn with United at Old Trafford, and I don’t think they’ll arrive in North London anything other than confident they can get something from the game. They’ve got some very effective attacking players, so not only are they going to be tough to break down, they’re dangerous at the other end of the pitch too.

Still, we know that Arsene Wenger’s philosophy is, for the most part, for his team to concentrate on playing their own game first and worrying about the qualities of the opposition second. After the disappointing display against Old Trafford and, I feel, the somewhat overstated reaction to our performance in Dortmund (not the win, I should add), I think we need to see Arsenal step it up again.

The concerns we had about post-Interlull tiredness shouldn’t be an issue today. Mesut Ozil didn’t play in midweek, nor did Laurent Koscielny. Olivier Giroud and Bacary Sagna, the only two involved in competitive fixtures, made brief cameos for France, so there shouldn’t be any kind of fatigue. Hopefully the effects of the illness that swept through the squad in the week prior to Old Trafford are well and truly a thing of the past and there’s a sharpness to our play that will be necessary to take three points.

In terms of the team, without Flamini I think we’ll see Wilshere play in midfield with Arteta, with Ramsey on the right, as much to counter the energetic full-backs of Southampton as provide us with an attacking threat. There’s a doubt over Tomas Rosicky so I don’t think he’ll be involved from the start, and as revealed yesterday there’s the option of Theo Walcott from the bench which is welcome, although hopefully not something we need to rely on. He’s a player who tends to need games under his belt to make an impact, but he certainly provides us with a threat we don’t currently have.

I said after Old Trafford that we haven’t yet seen the best of Cazorla and Ozil this season, today would be a fine time for them to really start to click. You get the sense they haven’t quite found each others wavelength just yet, and I’m sure that will come with time, but their trademark quick passing and intelligent movement could be what opens up a very stubborn Southampton team.

In other news, Arsene was pressed on the possibility of signing a striker in January, and while not ruling it out, said he felt he had enough options in the squad when we have Podolski and Walcott fit properly again. He said:

Look I am not against it but it is always difficult in the middle of the season. If somebody is doing well somewhere the clubs do not necessarily want to sell him. They can wait until the end of the season. Most of the time it is because we didn’t find the right player.

It’s worth noting that we’ve signed high profile attacking players in January before. Like Reyes, Adebayor and Arshavin. Perhaps the way their Arsenal careers worked out is what makes the manager reluctant to do it this time around. Still, he knows he’s in a delicate position with so much riding on Olivier Giroud and only Nicklas Bendtner for back-up:

If we lose Giroud we have nobody with body weight up front apart from Bendtner. I think he has the level but at the moment he doesn’t get enough games. And as well, in his head, is he here? Has he planned to go?

Like it or not, he’s what we’ve got until January and, most likely, until the end of the season, but when Podolski comes back he’s an option, albeit not a hugely convincing one in my opinion. And although Walcott can do a job, it means changing the dynamic of the team totally if he’s playing up front.

Anyway, I do think there’s been a willingness for people to think that because we spent £42.5m on Ozil means we’re going to flash that kind of money about in every transfer window, and that’s just not going to happen. If we can find somebody decent in the £10m price bracket, we might do it. If we could get somebody on loan who isn’t available simply because they’re a busted flush we might do it, but there’s no way we’re going to spend big on a striker in January in my opinion. Not unless there are some very special and convenient circumstances.

In other news, the boss confirmed they’re talking with Per Mertesacker about a new contract (hurrah!), while Thierry Henry has made his annual pilgrimage to London Colney and is currently training with the team to keep up his fitness during the MLS off-season.

Remember, if you’re stuck out and about, doing Saturday chores, or otherwise unable to view the game today, you can keep right up to date with our live blog. Check back later for a post with all the details, or simply bookmark our default live blog page and updates will begin automatically.

Right, that’s yer lot for now. Back later for the live blog, come on you Gunners.