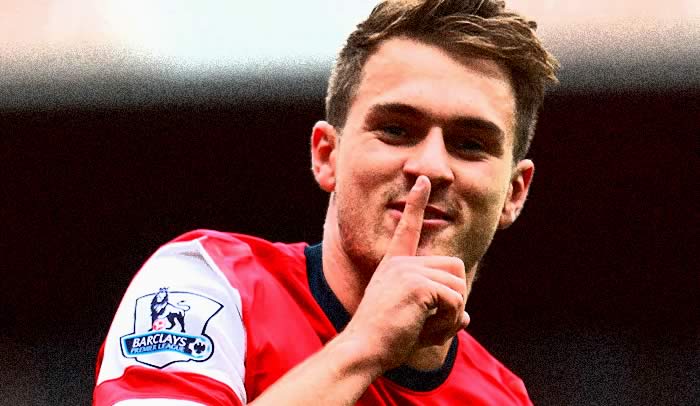 Champions League action tonight and some killer blows could be dealt in the so-called ‘group of death’.

So, I suppose first and foremost we’re looking for three points tonight and for Napoli to get a result in Dortmund tonight and we can sort out first and second in the group when we go to Italy in a couple of weeks time.

In terms of the team news there’s nothing different from the squad available on Saturday against Southampton except for the fact that Mathieu Flamini returns from suspension. And I wouldn’t be surprised if he came back into the team, Arsene Wenger mindful that our best performance of this season – against Napoli at the start of October – came when he used both Flamini and Arteta in midfield.

That said, back then he didn’t have Santi Cazorla or Theo Walcott available, and there must be a temptation to really have a go against a team which hasn’t yet won a point in Europe this season. All the same, when you listen to the manager talk about how dangerous they might be because they have nothing to lose, just as Cazorla did yesterday, you wonder if he might err on the side of caution a little bit and go for it later on if it’s really required.

There’s no reason why we shouldn’t be confident going into this game. Our form, recent blip against United aside, is good. We’re ‘defensively mature’, and we’re a team that can adapt to different games and situations much better than in the past. Previously, when our tried and tested game-plan didn’t come off, we tended to struggle to get results, and that’s no longer the case.

However, we are Arsenal and as such have often found a way of making life difficult for ourselves, especially in Europe. Marseille will arrive with no pressure, no expectation, and that can be a dangerous thing. It’s up to us to control the game, to not just dominate possession but be effective with the ball, create chances and make sure we put them away.

I think we’ve got more than enough firepower to hurt them, and enough in reserve if that’s what it takes, but any sense that we’re not taking this game with 100% seriousness could prove costly.

Aaron Ramsey was on press conference duty with Arsene Wenger yesterday, and the manager was full of praise for a player who has turned things around so remarkably. Unfairly, I believe, he became a lightning rod for greater frustration and to see him flourish this season is absolutely fantastic.

One thing I always said about Ramsey, even when his form was poor, was that he never let his head go down. Often you’ll see a player misplace a pass or two, miss a good chance, or play poorly, and then spend the rest of the game hiding in plain sight. Not Ramsey. He kept at it and at it, always gave everything even if, at times, nothing worked for him, and that was something the manager touched on, saying:

When their own confidence is down, of course they are in trouble. But he is a confident boy. But you have to give him credit for that transformation – the credit goes to him because he could deal with that. He could come back, never give up and convince everybody that he has the needed quality.

I remember when I’d post the team news ahead of a game on Twitter (I still do that but I remember when I used to too), and almost every time Ramsey’s name was in the starting line-up, there’d be replies @ me moaning and groaning about his presence. Even in the second part of last season when he made such an important, but less goalscoring contribution, to our run for fourth, there were still people unconvinced by his presence in the team.

That said, as much as I’ve always liked him, I didn’t expect to see anything approaching the form we’ve seen this season, but it’s just a reminder that we – as football watchers in general – are often too quick to make definitive judgements about players. Especially young players.

But the club showed their faith in him just under a year ago when they, along with 4 other Brit Kids, gave him a new long-term deal. He comes across as an intelligent young man and he’ll have known he was struggling. However, you can almost tie his resurrection and improvement to that moment. Since then he’s been on an upward trajectory and boy are we reaping the benefits of that.

Finally for today, this week’s Tactics Column makes a case for the defence.

Remember, midweek games often find people unable to see the game because of time zones and having work for a living and stuff, but you can keep up with every kick of the game (almost) on the Arseblog Live Blog. We’ll have full coverage for you this evening. Check back later for a post with all the details, or simply bookmark our default live blog page and updates will begin automatically.

Right, that’s that for now. Back for the game later on.