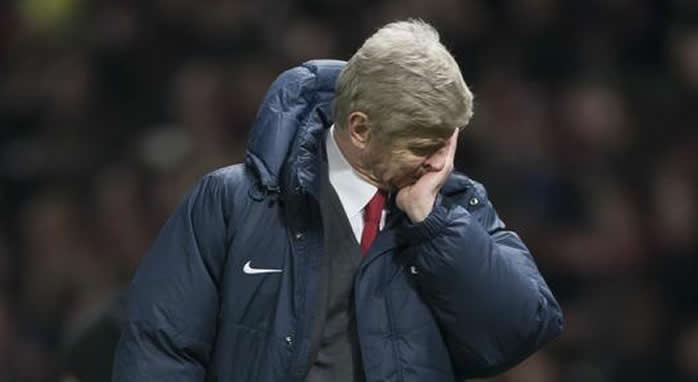 The suggestion before the game was that this was a good time to play Manchester United. As it turned out, the opposite was probably true. Instead of facing the league leaders, capable of playing excellent football but also winning games when playing poorly, United came up against a sub-par Arsenal – somewhat fatigued after a difficult week, and shorn of important players through illness before kick off.

In fact, it’s hard to think that there weren’t others affected by whatever bug ruled Mertesacker and Rosicky out of the squad such was the paucity of performance. Even so, there wasn’t a great deal between the sides. The Dutch Skunk’s set-piece goal and a Wayne Rooney shot in the second half was about all they could muster from an attacking point of view. Sadly, for us, one goal was all it took because we never really looked like troubling them at the other end.

The goal: not great defending but not the worst by a long way either. Skunky got a bit lucky, his header bounced off his own shoulder and looped into the far top corner of the net. Hardly a Platt v United bullet, for example, but despite the best efforts of Kieran Gibbs it went in and it was enough to win the game.

Our first half was otherwise quite like the display in Dortmund. We found it difficult to build any kind of rhythm, looking to force things with unnecessary flicks and ambitious long balls when we should have just tried to hold onto the ball for a little bit. Rooney went tumbling for a penalty (as he does), Wojciech Szczesny got loafed by Phil Jones and the United fans sang that song about Arsene Wenger. Fun stuff.

We were better in the second half, at least in terms of possession, but still struggled to make anything of it. Ramsey played a superb ball over the top of the United defence for Mesut Ozil but the German seemed to just stop when he should have jumped and headed it at goal. Very odd. Maybe he thought the keeper was going to come for it and didn’t fancy getting clattered.

Our best outlet was Bacary Sagna on the right hand side whose crossing, often criticised, was outstanding. A series of excellent balls in from that side created the only real danger from an Arsenal point of view, but unfortunately we couldn’t make anything of it. Wilshere replaced Flamini whose booking means he’ll miss Southampton. Nicklas Bendtner came on for Cazorla and late on Serge Gnabry was given ten minutes down the right hand side.

Almost immediately, Ramsey found him in space and we had another of those almost moments. It makes you wonder if he might have been given a run out earlier, but the word pre-game was that he was one of those suffering from illness so I suppose that was a factor. Still, it showed that having a more natural wide player does change the way we play. Aaron Ramsey works hard but we don’t get the best out of him there, even if we have won games with this system.

Late on Smalling fluffed his lines at the back post, before another Sagna cross flashed across the United six yard box. Bendtner couldn’t get a toe on it, blocked off somewhat by the defender, and that was that. You can’t say there was a great deal between the teams in terms of quality. They weren’t very good, we were quite bad really, and it did feel like a chance missed to some extent.

We have given a lot this week, at Liverpool, Dortmund and today, and I think a draw would have been fair today. The second-half we had a real go and played our usual game and we came very, very, very close many times to score, but we have to digest it and come back after the break in a strong way.

Which I agree with. It’s time to regroup and thankfully the start we’ve made to the season makes this defeat much more manageable. We’ve given ourselves some margin for error and used up some of that. I thought criticisms of the team’s desire and lack of mentality were odd considering that we’d come into this game having beaten Liverpool and Dortmund in quick succession. There weren’t many criticisms of our mentality on Wednesday night, for example.

However, I don’t think there’s much you can say about the performance, as a whole or from certain individuals. You look at that team that was out yesterday, and even though we lost Per and Rosicky, it was good enough to get something from the game. I thought Vermaelen, starting his first Premier League game since April, performed really well and was particularly solid in the air.  But the game wasn’t lost at the back really. A Stoke-esque set-piece goal, something we’ve been solid from for a while now, was the difference.

Other than that I thought we dealt with them fairly effectively. It was the other end of the pitch, and how poorly we played, that cost us. It was one of those days when you wished we had a decent alternative to Olivier Giroud. I’m a fan of the HFB, as you know, but he is carrying a heavy burden up there on his own game after game, and sometimes it’s not going to work. Being able to bring on another striker, perhaps one with slightly different qualities, would be a real boon.

Then we have Cazorla and Ozil, two players of outstanding technical ability and quality, neither of whom had any impact whatsoever on the game. Santi was kind of anonymous, while the precision and intelligence of Ozil’s play was nowhere to be seen. He looked sluggish, off the pace. Perhaps he’s missing somebody making the runs ahead of him but it was a disappointing performance all the same. Both of them are capable of much more.

Still, we sit top of the league and I don’t think United showed us much yesterday that would make you think they’re anything special. The best thing about them was Wayne Rooney’s energy. He was all-action, it has to be said, and very effective with it, but beyond that they don’t look like anything other than a reasonably functional football team.

Overall, I thought we looked like a team with tired legs, feeling the effects of using a small group of players week in, week out. Now it’s down to how we react because the post-Interlull fixture list is challenging, to say the least. I think it’ll be important to get players back. Hopefully Walcott and Podolski will be available when the football kicks off again. We could see more from Gnabry to give us that different option in the wide areas and there’s certainly plenty for the manager to chew over during the next couple of weeks.

It’s always frustrating to lose a game going into the Interlull, but I can’t remember the last time that happened and we were able to digest it from the top of the table. You can’t say everything’s perfect, not by a long shot, but I think it’s fair to say that’s some kind of progress.