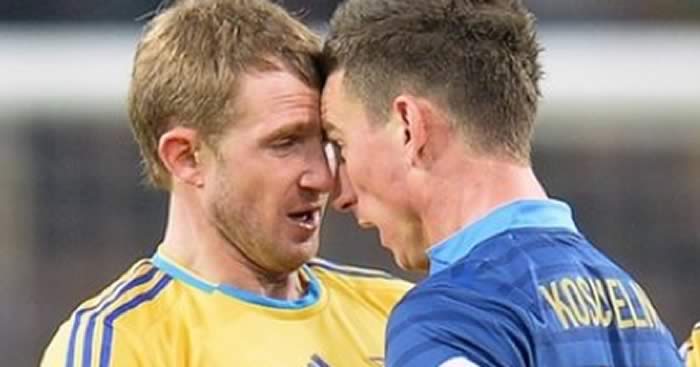 A very quick Saturday review because my head hurts for some reason. Much like Laurent Koscielny’s, I’d imagine, who suffered a torrid night as France went down 2-0 in Ukraine in the first leg of their World Cup playoff. He conceded a penalty and then got sent off in the final couple of minutes.

I don’t suppose he can really have any complaints about the red card, the minute you raise your hands you’re asking for trouble, but he seemed to take great exception to the Ukrainian player writhing around on the ground like he’d been falcon punched by Hellboy.

The red mist came down, he loomed over the faker, but the damage was done and he now misses the return leg on Tuesday. Which, I suppose is bad for France, but good for Arsenal. He gets a week of rest ahead of a busy schedule and for us that can only be a good thing. Will he be affected by what happened last night? Only if he’s got the mental strength of a special needs Water Sheringham. Which I don’t think is the case.

Olivier Giroud played for 70 minutes, and got booked, while Bacary Sagna sat on the bench. Meanwhile, England lost 2-0 to Chile at Wembley with Jack Wilshere playing 71 minutes. I have no idea how he did but, frankly, I couldn’t care less as long as he’s fit. Kieran Gibbs stayed on the bench.

I think Mesut Ozil got a run-out as a substitute during Germany’s 1-1 draw with Italy, Thomas Vermaelen played for Belgium on Thursday night as they lost 2-0 to Colombia, while Santi and Nacho are in the Spain squad for today’s game against Equatorial Guinea.

Speaking of Nacho, he’s talked a bit about his current situation at Arsenal in relation to going to Brazil with Spain, saying:

I’m not getting the minutes I want at Arsenal. I’ll continue fighting and working though because I really want to go to the World Cup. There’s nothing like playing in the World Cup and representing your country. I hope I can experience that.

Although he’s not starting many games, he’s certainly featuring regularly. He’s usually the first of ALL THE FULLBACKS and has shown some real attacking verve this season. With Gibbs playing as well as he ever has, and staying fit in the process, it’s been hard for him to get into the team, but the season is long and I’m sure his chance will come.

Finally for today, do ensure you check out the Arsenal Gentleman’s Weekly Review.

Right, there’s nothing much else to tell you. Time for breakfast, more tomorrow. Probably. Have a good Saturday.