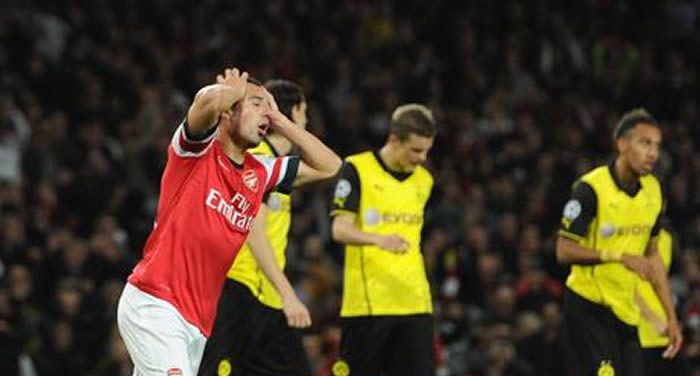 Champions League action tonight as we face Borussia Dortmund in the second part of our back to back with them.

The first game was a salutary lesson in what not to do. Do not get caught in possession on the edge of your own area. Do not allow yourself to get stretched by a very accomplished counter-attacking side. Despite the fact we didn’t play particularly well that night, defeat was still completely avoidable and that’s what we should be taking into tonight’s fixture.

In terms of the team news, Serge Gnabry has recovered from an ankle knock and makes the trip. He’s an unlikely starter but gives us an option from the bench that could be very useful. Meanwhile, Kieran Gibbs is ‘completely available’ according to Arsene Wenger which suggests that he’s had no real issue since the Liverpool win. With that in mind I suspect we’ll see the same team tonight as we did on Saturday.

Jack Wilshere remains out, and is a big doubt for Sunday, but that game could see the return of Theo Walcott and Mathieu Flamini to add some variety and fresh legs to proceedings. Tonight, however, we have to rely on the team which performed so well against the Mugsmashers and hope they can apply the same kind of pressure to Dortmund.

Arsene Wenger is looking for his team to pull off the kind of result they did against Bayern towards the end of last season, saying:

We do take belief from winning at Bayern Munich last season.

And says that he’s out for three points tonight:

That will not change and, of course, we will have a positive attitude in our game, in our approach to the game. That’s what makes football great as well but Dortmund is a very positive side, we are a very positive side so at least you have the guarantee that the two teams will try to win the game.

And while I can’t really argue with the mentality that wants to win the game, home or away regardless of the opposition, I hope some lessons have been learned from the first game. A win would be lovely tonight but a draw is a grand result too, especially as we’ve got a home game against Marseille to come before a trip to Napoli.

The manager called his team ‘naive’ after the first game. They broke quickly, scored, and that was that. In hindsight there was no need for us to go chasing three points. The same applies tonight. If it’s level and it’s late I would hope that we still look to create opportunities but do it in a more sensible and cautious way. Losing once on the counter is bad, to do it twice in a row would be bonkers.

Against Liverpool at the weekend we were fantastically disciplined as a team. The sharpness in the tackle and interception, the awareness of danger all over the pitch, and the work-rate left the most in-form striking duo in the Premier League look toothless. With that same attitude tonight, I think we can keep Dortmund quiet, even if they have better options in midfield and aren’t likely to cede us that area with (multiple) poor formation selection.

Santi Cazorla got his first goal of the season on Saturday and looked much more like his normal self. Hopefully he can build on that over the next few weeks. Giroud was a monster and we’ll need the same again from him against Dortmund’s central defenders, while Mesut Ozil will be keen to impress on home soil. I thought he made a good contribution to the win against Liverpool but there was the sense from his performance that there’s a lot more to come from him. Tonight would be a good time to see some of it.

We’ve certainly got the players and the talent to hurt them, but away nights in Europe are unpredictable at the best of times. It might not be terribly swashbuckling, but I think this is a game from which I’d happily take point. I think we’re capable of all three, but so are they, and we have to ensure that we don’t put ourselves in a really difficult position ahead of our final two games in the group.

Not much else going on but you can get Mesut Ozil’s opinion of tonight’s opposition here, and how he’s settling into London life.

If you’re stuck in work later due to time zone madness, remember that you can make it look like you’re actually working but follow the game from first whistle to last on our live blog. Check back later for a post with all the info, or bookmark our default live blog page. Updates will appear automatically, as if by magic, but it’s not magic. Or is it?

Also, if you fancy betting on the game, sign up with Paddy Power, bet £10, get £20. Click here to register.