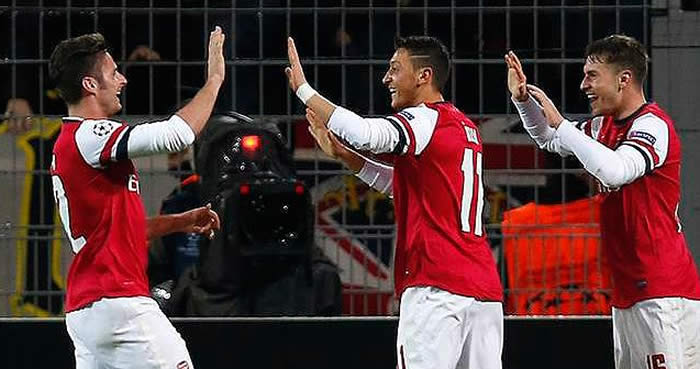 Before the game Jurgen Klopp said he wasn’t worried about Arsenal’s recent away record. Turns out he should have been. It might have been something of a smash and grab from us, but it was another one of those wins which will do wonders for belief and confidence.

To go to Dortmund and win, after winning at Bayern last season, is a fantastic achievement, and it puts us in a very strong position in the Champions League group. Not to mention it keeps the momentum going ahead of Sunday’s trip to Old Trafford.

The first half was difficult and a bit of a struggle. They had 6 shots, we had none. We had Mikel Arteta booked, rightly enough, then saw the referee ignore an incident just as obvious which should have brought yellow to a Dortmund player. Arteta then had to contend with Lewandowski doing his best leaping salmon impression every single time he went near him to try and get him a second yellow.

In fact, I thought there was an unlikable touch of Mourinho’s Porto about them last night, so often did they fall to the floor. To be fair to the ref, sometimes he just waved play on, but it gave us something extra to cope with. And that aside, they really should have been ahead at the break, but Mkhitaryan fluffed his lines in a big way, curling a shot wide with just Wojciech Szczesny to beat.

In the second period we had Szczesny to thank for keeping us in it. His first save, down low at his post from a Reus header, was excellent. His second, stopping a vicious, low Błaszczykowski drive was outstanding. The strength in his hand to stop it was incredible, and Dortmund were caught offside from the rebound. At the other end we struggled, as in the first half, unable to build any real momentum.

But just as it looked as if the best we could hope for was a 0-0, Rosicky got a bit of luck after a poor pass and fed Ozil on the corner of the area. He chipped it in, Giroud won a great header, knocking it down for who else but Aaron Ramsey to put us 1-0 up with a brave header. His 11th goal of the season, he makes my knees weak.

And that sparked something in Arsenal. Ramsey almost scored again minutes later after a great Giroud cross. The Frenchman had one cleared off the line. Mertesacker almost connected with a Cazorla cross 5 yards from goal and the BFG flicked a header just over the bar from a set-piece. And none of that is to mention the penalty that should have been awarded to Laurent Koscielny when Weidenfeller absolutely flattened him in the area, getting nowhere near the ball.

The ref played on, Ramsey filled it at centre-half, it seemed an age before Koscielny was allowed back on, but when he was he made two brilliant interventions in our area inside 10 seconds, which summed up the way the team went about their defensive duties. Alongside him Mertesacker was quite outstanding again, while in midfield the 33 year old Tomas Rosicky rolled back the years with a performance of true energy and commitment. I love his love for the sliding tackle.

Dortmund were increasingly desperate, the noxious Lewandowski going over a nothing challenge from Arteta to try and win a penalty and get the Spaniard a second yellow, but thankfully the referee wasn’t buying it. In the final seconds he was tumbling again, this time because Mertesacker touched his shoulder, but he got everything he deserved last night. Which was nothing.

After bringing on Monreal to add some defensive cover, we brought on Vermaelen and Bendtner in injury time as much to take up some time as anything else, but try as they might, Dortmund couldn’t find a way through. A massive, massive three points and another great win away from home. Afterwards, Arsene said:

We had a united, focused performance, especially defensively. I must say Dortmund put us under huge pressing. After we scored I felt we could have scored a second goal and we were less under pressure. Overall it’s a huge win here. If you look at the results they have made at home in the Champions League, not many teams have achieved that. Overall the whole team has shown a huge solidarity to get through difficult moments of the game.

While I don’t think this is one of those games people will look back on in terms of the performance, it certainly is when it comes to the result. It sends quite a message when you consider the way this Dortmund has been playing and performing in recent times. No home record is safe when Arsenal come to visit.

It’s also notable because in recent seasons there’s simply no way that Arsenal could have married a performance like that with three points. Something has changed and it’s hugely encouraging. We can play well and win, as we’ve seen many times this season, but we can also fail to hit the heights and take the points. That is a very, very good habit to get into.

It just didn’t really click for us until the goal last night. The ball didn’t stick, passes went astray from players who are normally close to impeccable on the ball, we never put them under any pressure, but then bang, goal, and we might have scored a couple more afterwards. Those bursts are devastating but made possible by stout defending, organisation and a goalkeeper who is in really sensational form right now.

Those two big second half saves from Szczesny were so important, and as well as our back four played last night, they found themselves reliant on the last line of defence. Not for the first time this season the big Pole has played a very important role in an Arsenal victory and while you’d prefer him to have less to do, it’s fantastic that when he’s called into action he’s switched on and ready for it.

So, with Napoli beating Marseille, a win for us against the French side in a few weeks time would go a long way to securing qualification for the knock-out stages. The manager urged his team to learn the lessons of the game at the previous Emirates. They did and it showed.

The tests keep coming, we keep passing. Dortmund are far and away the best side we’ve played this season. Is it ok to say now that Arsenal have beaten a big team?

The goalposts are moving constantly, we just carry on scoring.