I bid you good day.

Since our last confabulation we have suffered something of an anomaly – an away defeat to Mr. Glazer’s Redskins of Salford. It was a most unfamiliar sensation, watching a game of foot-ball away from home, and having the score reflect the unfortunate reality of defeat. Yet still, we find ourselves atop the Top Division, with some testing games in the past, and an opportunity to annoy and confound Alan Hansen et al by maintaining, nay, extending our position as the Christmas Fairy at the pinnacle of the gaudy tree that is the English Premiership.

‘Twas a curious game, and I must confess I was a tad distracted by Mr. Rooney’s tonsorial appearance. As we all know, he underwent surgery to transplant hair from his bottomcrack to his head, and the slightly curlier nature of the strands turn the stomach of every right-thinking onlooker. We had plenty of opportunity to view his grotesque pate as Rooney, in his normal fashion, played at 100% of his potential. He truly does raise his game agin The Arsenal. I have it on good authority that his concubine, dear old Vera from the Wythenshawe Nursing Home, promises him an extra Werther’s Original on his next procreative visit.

Mr. Orwell seemed to be playing with one foot in the officer’s mess, and it became clear precisely why that was; he had succumbed to the mysterious affliction which had rooted Lord Peregrine to the porcelain throne for some time. Must be hard to conjure a Mesmertron if one is concerned that an urgent visit to the privy may be required. We wish him a speedy recovery.

There was of course an unfortunate appearance by He Who Shall Not Be Named. I shall not comment upon this awful individual, but shall leave it to this extract from Mr. Walcott’s autobiography to do the talking. 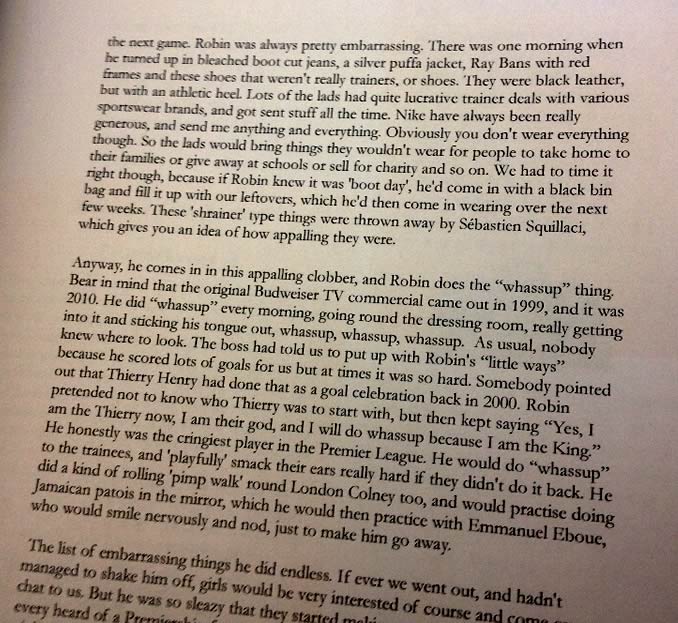 It should be noted that our friends from Middlesex are proving quite this season’s daring risk-takers, with their solitary goal in 341 minutes of Premiership football. Perhaps they are opera fans, and they are attempting a response to Herr Wagner’s Ring Cycle, which lasts for 16 hours. They still have some way to go in their art project but we wish them well. Still, there’s always a penalty, eh chaps? From whence precisely one third of your goals have come this season.

Previous articleLooking back
Next articleKos off Saturday round-up