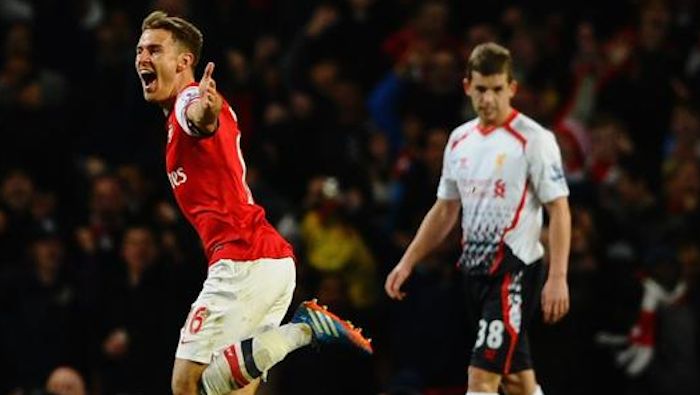 So, the first hurdle in a challenging week was overcome as the Mugsmashers got smashed 2-0.

They were surprisingly tame I have to say. I really expected more from them but we played well, controlled the game for the most part, and scored two lovely goals. The first from Santi Cazorla came when his header rebounded off the post and he slammed home at the second attempt. I imagine Liverpool will be wondering why the smallest man on the pitch was firing in headers and the answer is because they gave Arsenal players too much space all throughout the game.

Their midfield was particularly ineffective. Gerrard, Lucas and Henderson had no real answer to the movement and energy of Ramsey, Rosicky, Ozil and Cazorla, and Mignolet had to make a decent save to stop Ramsey doubling the lead.

In the second half they looked better and a little bit more incisive when they brought on Coutinho but Olivier Giroud should have put us 2-0 up. The dinked effort was the right idea with the keeper coming out but unfortunately it landed the far side of the post.

Mesut Ozil had an odd kind of game, I thought. For someone so skilful his touch was poor at times and just moments before our second goal he let a ball run out under his feet for a Liverpool throw. But it was his square pass that found Aaron Ramsey outside the Liverpool box. Again they stood off him, allowed the ball to bounce a couple of times and his dipping finish, and his 10th goal of the season, was a thing of real beauty.

At that point Arsene Wenger began the process of all the fullbacks to shore up the game but lost Kieran Gibbs to injury after he made a fantastic late run. Thomas Vermaelen came on to replace him and we ended up with Monreal and Jenkinson on too.

Late on there was a touch of overconfidence when Wojciech Szczesny, who was otherwise excellent throughout, played a pass off Saurez (I think)  (update: it was Sturridge. Thanks all!) and luckily it rebounded straight back to him. But almost immediately Liverpool had their best chance of the game, Suarez was clean through, he had Sturridge waiting at the back post for a tap-in, but having dreamed all summer of scoring at the Emirates took the chance himself and curled it wide.

Sturridge looked disgusted. I laughed. But it was just a little warning, if we didn’t already need it, that we have to stay switched on for the 90 minutes. Afterwards, Arsene said:

It was important to respond today, to convince people that we can win these big games. To win it in a convincing way is even more important.

And on the performances:

You cannot single anybody out today because the whole team played well. Our defensive performance was outstanding. We kept Sturridge, Suarez, Gerrard and then Coutinho and even Moses quiet. I think our defenders deserve a lot of credit as well.

Can’t argue with that, but I thought Mikel Arteta was so good in midfield yesterday. I can understand people were worried about not having Mathieu Flamini, but some of that worry seemed to translate into doubts about Arteta’s quality and ability to do what was required in a big game like this. He put those worries to bed very convincingly.

The way Arsenal passed the ball was fun to watch. Reminiscent of us at our very best, players full of confidence making passes with real pace to them. It makes such a difference, the opposition chasing shadows as the ball zips around the pitch.

And up front, despite the miss, I thought Olivier Giroud was brilliant. He won it all, he was strong, held it up, brought others into play time and time again and the Liverpool defenders just couldn’t cope with him at all. And that’s not to mention his defensive shift too, I counted at least two clearing headers from inside our box from Liverpool set pieces.

Overall, a game which will go some way to rebuilding the confidence which had taken a little dent in the last week-ten days. A convincing win over a ‘big team’, and we sit 5 points clear at the top of the league. Although there’s a long way to go it’s still a very nice place to be.

The confidence amongst the fans was palpable too on the way out of the stadium. There’s a sense that something is happening this season that hasn’t happened for a while. Or at the very least there’s the possibility of something happening and that’s more than enough to be going on with.