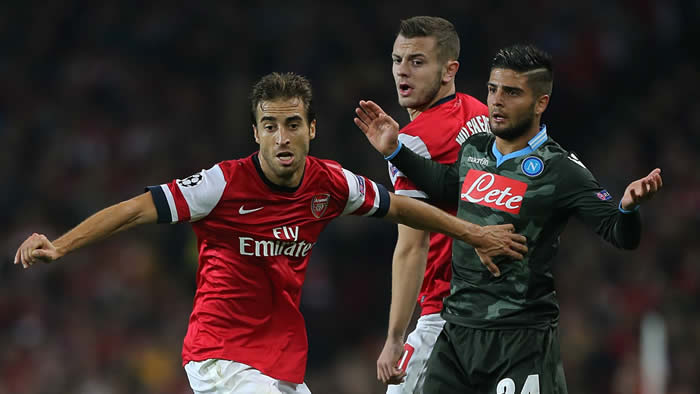 One more Premier League test, away from home, as we face West Brom ahead of the upcoming Interlull.

One point would move us back to the top of the league (jointly) after Liverpool’s win yesterday, three obviously would be far preferable and would keep up this incredible run on the road. In terms of the team we’re without Bacary Sagna so Carl Jenkinson will deputise there.

Other than that there are no fresh injury worries and I wouldn’t be at all surprised to see the same line-up as the Napoli game. Five midfielders with Arteta and Flamini providing a platform for the more attacking talents of Ozil, Ramsey and Rosicky. Even though the Welshman started on the right in midweek, the fluidity of the system allowed him to get involved all over the pitch. The same for Rosicky, while Ozil has licence to roam and do damage.

I do wonder if this kind of system is something we’ll see regularly away from home. The Arteta/Flamini situation is clearly not an either or. The Spaniard is assured in possession, the Frenchman offers an extra layer of protection in midfield. It’s interesting to hear him speak about his role in the team too. In today’s Observer he tells Amy Lawrence:

Defensive work is maybe a bit more difficult to see than when you score or make an assist. But it’s very important as part of the balance of the team. I am a defensive midfielder, trying to find the best balance in the team between the defence and attack. Winning games is a quality of effort. It’s teamwork.

I like what he brings to the team. Not only is he fully switched on defensively, he’s destructive. To the opposition. A spoiler. He’ll take a yellow card on halfway to prevent danger. He’s not alone in that, obviously, but it’s natural to him and perhaps more a part of his game after his time in Italy. That’s not to say it wasn’t previously, someone this week posted a video of him rugby tackling an opponent early in his first spell at the club, but he says Italy taught him a lot about the game and it’s easy to see that.

Anyone who watched West Brom beat Manchester United last weekend will know they’re not to be taken lightly. Although they’ve lost the powerful threat of Lukaku, they’ve found a very dangerous looking player in Berahino and they’re a side who have proved difficult to beat in recent seasons.

Last year we were cruising with a two goal lead when a mistimed Mertesacker challenge resulted in a red card and a penalty. Those final 15-20 minutes were excruciating. They missed some very presentable chances and we were barely hanging on by the end.

Today is going to be another tough test but this is a team full of confidence and belief which goes a long way to making things easier. If we show the same application and discipline when we don’t have the ball as we have in almost every game this season, then we’ve certainly got the quality to hurt a West Brom team who have been quite parsimonious defensively. They’ve only conceded 5 goals so far and they look a well drilled side. United’s goal last weekend was something of a fluke too.

Going into the Interlull on the back of another good result would be very nice indeed, and it gives us time then to get back some of the walking wounded. All going well Cazorla will be back, Sagna not far away, Walcott next, and hopefully Podolski and Oxlade-Chamberlain soon after that. In the meantime the players we’ve got are given the task of keeping up this fantastic run.

Come on you reds. Or most likely yellows. But come on either way.

And if you fancy betting on the game, perhaps on a Flamini yellow or an Ozil assist, sign up with Paddy Power, bet £10, get £20. Click here to register.

Right, that’s that until later on. Have a good one in the meantime.