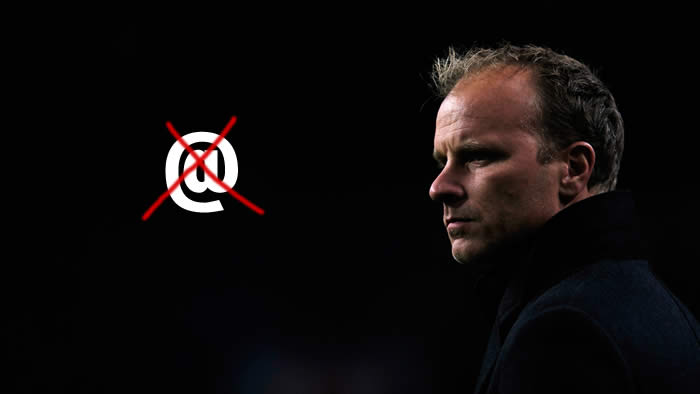 It feels like one of those Mondays. A kind of back to school after the holidays Monday. Even though I haven’t been in school for a long, long time.

One of those Mondays where you could use a song about Monday. Such as: I don’t like Mondays – The Boomtown Rats. Or Rainy days and Mondays – The Carpenters. Or Mondays are rubbish and so’s your face and you smell like piss drenched socks – Billy and the Boingers (a true classic, I think we can all agree on that one).

It’s not helped by the lack of Arsenal stuff. Still the most interesting thing that happened was somebody fooled Arsenal, Edwin van der Sar, Ian Wright and Pearce Moribund by setting up a fake Dennis Bergkamp Twitter account. There’s the whole how question, which should lead to some introspection in certain quarters, but also the why question.

There was a time when any Arsenal player who didn’t have a Twitter account suddenly got one. They usually followed the same people and used the same dodgy English so they were easy to spot. Plus, they tended to give themselves away by sending messages directly at accounts with large followings asking them to inform the wider world they had now graced us with their presence. That’s certainly not suspicious.

But what could anyone really hope to get from pretending to be Dennis Bergkamp on the Internet? There’s simply no way it could last long, there are too many official and unofficial channels who could debunk it, and that’s exactly what happened. Cesc Tweeted about the account being fake, so too did Ajax, and the house of cards crumbled in a matter of minutes.

Did that time spent as Dennis provide the owner of the account with any of the footballing skills the real deal possessed? No, it did not. Did he glean a smidgeon of the class of Bergkamp? No. Did he even use it to cause any kind of mischief? No, no he didn’t.

Did it do anything to make that person feel better about themselves? Perhaps, if they consider a smilie from Ian Wright something to cherish.

“Look ma, I pretended to be someone else online and one of Arsenal’s best ever players wrote: colon, hyphen, close bracket at me.”

“Son, we’re having you committed, you complete tit.”

There are many figures in the footballing world whose personality and/or reputation could open them up to a parody account. There are many of these, but few are actually any use. When done right they’re funny and entertaining, but it takes a level of skill and deftness that not too many people are capable of.

There are others, like Joey Barton, who are impossible to parody simply because the stream of consciousness they produce themselves is all anyone needs. There’s just no way to parody what appears to be parody. But Bergkamp? You couldn’t do that with him anyway.

All you could possibly do is pretend to be him for a few hours at most in the hopes of … what? I just don’t get it. As it happens, I think if he really was on Twitter, it’d be one of the most interesting football accounts to follow. The way he sees the game and the way he thinks about it would be a fascinating read.

However, the reality is that as he’s involved at coaching level with Ajax, working within football, means it’s probably prudent for him not to share exactly what he thinks. He’s a coach, not a pundit and has no need to make a name for himself. Plus, and I know this is hard to consider, he’s probably got better things to do.