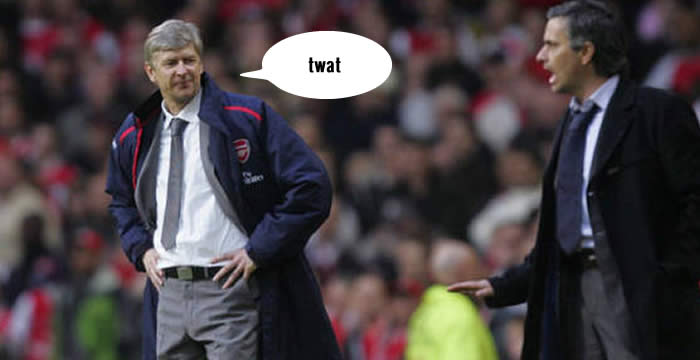 It’s funny to listen to Jose Mourinho talk about how Arsenal have been given an advantage ahead of tonight’s game. Ok, so playing on a Tuesday after a 4pm Sunday kick-off isn’t ideal but, you know, having bazillions of endless pounds to build a squad kind of balances that out.

He can rotate a little, or a lot, and it makes no difference. He can risk playing a few of  his more senior players because he knows he’s got the depth to be able to cope if they pick up a knock along the way. We don’t really have that luxury. While there are obvious replacements – Jenkinson for Sagna, Monreal for Gibbs, Vermaelen for one of Mertscielny, Fabanski for Szczesny and big Nick for Giroud – there are areas of the pitch where we’re short on options.

Young midfielder Isaac Hayden is likely to start, with the manager talking up his qualities very publicly, but midfield looks like an area we could find difficult unless we risk playing an experienced head or two. I think we’ll see something like:

However, Gnabry is carrying an ankle knock and is a doubt, while German Thomas Eisfeld, a probable starter otherwise, has a back problem. In his pre-game chat the boss doesn’t categorically rule him out, but it seems unlikely he’ll be available. After which we’ve got to raid the youths to fill that SOMEONE spot. I suppose we could use the game to give Santi Cazorla some minutes to get him back to full fitness but apart from that I wouldn’t like to see any of the players who’ve got a hectic schedule ahead of them in the next few weeks start.

Make no mistake, the four games after this one are absolutely crucial for the development of our season. We’ve started so well, but we face two title rivals (and you can laugh at United if you want but despite their troubles they’ve got so much quality and experience that it would be a fool that would rule them out simply because they hired a mediocre manager), and Dortmund in a Champions League encounter that will go a long way to deciding the final make-up of the group.

For me those fixtures are far more important than tonight. As I said yesterday, this game feels like something of an inconvenience. Like it or not it’s our fourth priority and perhaps the thing to glean from that is that it no longer feels like our best chance of winning something. It’s a competition we have taken seriously down the years, even if we have used it to blood young players in the early stages, but I don’t believe it’s worth risking our most important players for.

It slims our chances of winning tonight’s game but c’est la vie. And who knows, we might have one of those nights when the youngsters and the players on the fringe pull of something special. Chelsea may be tired after celebrating Joe Hart’s mistake and we could take advantage. Either way, it’s not a game I’m going to get overly invested in. I don’t think defeat would be the start of some downward spiral, it’s very easy to put this game into its own little box. Que sera, sera, and all that.

Meanwhile, speaking of Serge Gnabry, he’s been handed a new long-term contract which is good news for him, and for us. It’s obvious he’s highly thought of because he was thrust into action last season, way before he was ready, to try and spark some life into a team that was struggling from an attacking point of view. This season he’s already made 5 appearances, including a start and a vital goal against Swansea, and he looks like he’s developing well.

With Theo Walcott and Alex Oxlade-Chamberlain both out of action, he’s the most obvious option and does provide something different in the final third. We can cope much better with playing someone like Aaron Ramsey in a wide position these days, but for direct running and trickery, Gnabry fits the bill very well. Good luck to him, it’ll be interesting to watch him grow over the next few seasons, and when everyone’s fit (haha), we do have good options there. The competition amongst them should prove fruitful too.

Right then, tonight’s game is on the TV so we will have live blog coverage for you. Check back later for a post with all the details or bookmark our default live blog page which will update automatically. Well, it will update when we post updates but you don’t have to refresh or any of that old school nonsense.