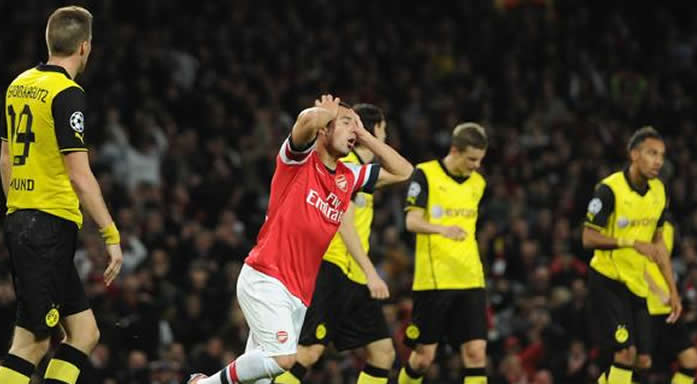 It’s been 66 days and 12 games since we’ve tasted defeat. It had to happen sometime, but in the cold light of day it’s hard not to look at last night and think it was avoidable.

Leaving aside the performance, which was a unconvincing at times, and uncharacteristically sluggish from the start, it reminded me a little of the game against Swansea last season. Then, we’d played poorly but threw people forward trying to win. They caught us on the break (twice) and scored late goals to take the points.

Last night we were caught similarly as Lewandowski’s late strike won the points for the Germans. I suppose the difference is against Swansea we were attacking out of desperation as much as anything, last night it was built on confidence because of the results we’ve had since that opening day fall to Villa. Still, the manager admitted afterwards his team should have been more cautious and not allowed that much space for a team like Dortmund to exploit, saying we were ‘naive for the second goal’:

You can say that we can only look at ourselves for not being mature enough in situations like that. If you cannot win the game, you don’t lose it. Especially in the second half when we were on top, we made things difficult for ourselves by giving them the second goal.

I know it’s not really in our nature to do that, especially at home when there’s an onus on us to go and win it, but I think there are times when you have to assess your own performance and settle for a result which would have brought us a very decent point. That said, we did look the side most likely to score again, Santi Cazorla certainly changed the dynamic when he came on, and after the streak of wins we’ve had, I don’t really blame them for having a go at it.

However, it’s a lesson that needs to be taken on board. They’re the first top quality opposition we’ve faced this season and we came up short in the end. I don’t see it as a disaster in any way. Nor do I think Dortmund outplayed us to any great degree, but they certainly made it very difficult for us to play the way we like to.

We weren’t helped by some players being off their game. Aaron Ramsey’s confidence led him to dribble in an area that you never should. He got caught, they punished us. Bang. All of a sudden we’re a goal down and chasing the game. Jack Wilshere struggled to do the simple things right, basic passes went astray too often. And unfortunately, that’s the kind of individual performance that has a knock-on effect on the team.

Giroud got little service and was pushed into wide areas to try and make things happen himself, and we looked tired and leggy right from the kick-off. Ozil was quiet. There was no repeat of the blistering start against Napoli, instead we stood off Dortmund, allowing them plenty of time and space to pass the ball around, as they pressed us constantly when we had it.

They weren’t hugely dangerous with it, it has to be said. Some long shots, and some good Arsenal performances in the defensive third – particularly from Koscielny and Arteta – snuffed out much of what they tried to do, but at no point did we ever build real momentum. At times when simply keeping the ball would have been key, we looked to force the issue, turning over possession.

But it never really clicked for us. Despite Cazorla’s introduction, which did make us more effective as an attacking force, the only real chance of note was the Spaniard’s shot which hit the outside the post after an Ozil cut back.

When an 82nd minute Arsenal move broke down in their half they came piling forward, Grosskreutz crossed to the back post where Lewandowski had all the time and space in the world to knock home the winning goal. The late introductions of Bendtner and Gnabry did little. Dortmund simply saw the game out in a very clever way; spoiling, time wasting, all the things you’d want your team to do away from home in Europe when they’re protecting a one goal lead.

It means the group is now as tight as tight can be with ourselves, Napoli and Dortmund all on 6 points after the Italians beat Marseille last night. That makes our life a bit more difficult, but then it was never going to be a breeze going through this group. We’ll have to get something from at least one of the away games and look to smash Marseille when they come to London, but despite the defeat last night, I don’t think we’ve got anything to be particularly worried about.

Napoli were dealt with ruthlessly and efficiently when they came to town. It’s not difficult to look at last night and see how we could easily have taken a point and with a better, more energised performance, there’s no reason why we can’t beat Dortmund either. But it’s about ensuring that we learn the lessons of last night.

It’s so long since we’ve lost that we’ve now got to step back, take stock, and get things moving again. It’s not always the worst thing in the world to get a little reminder that not every opponent is as easy to deal with as some we’ve faced in recent weeks. Particularly when you look at the upcoming fixture list.

Confidence is a fantastic thing, over-confidence can be damaging at times, and that’s something we can take from what happened against Dortmund. I don’t believe this is going to jolt us off course or anything like that. We’ll be fine, but we do have to pay attention and just be a little more sensible at times.