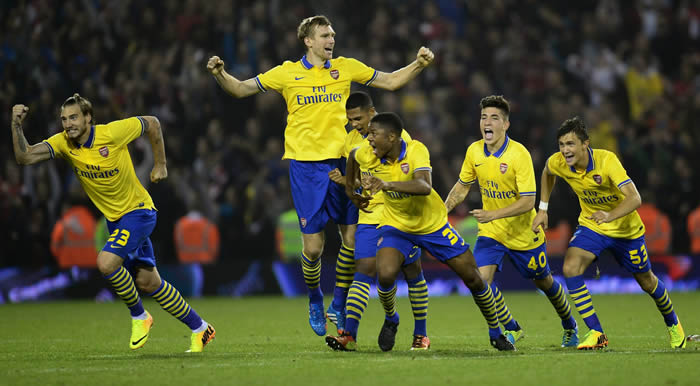 So we’re through to the next round of the Capital One Cup after a victory on penalties against West Brom last night.

The team was fairly much as expected. Returns for Vermaelen, Arteta, Monreal, Fabianski and Jenkinson, while youngsters like Hayden, Gnabry, Ryo and Eisfeld made up the numbers. Nicklas Bendtner started up front for us for the first time since March 2011.

And as you might also expect, making so many changes affected the fluency of our game. The same applied to West Brom who fiddled with their team too, and the net effect was a first half of staggering dullness and tedium. The closest either side came to a goal was … actually, it doesn’t matter. There’s just no point wasting words on that 45 minutes.

The second wasn’t much better, to be fair, although Fabianski had to be alert to make a fine stop from Mulumbu. Just as it looked as if West Brom were building some momentum, we only went and scored. Nicklas Bendtner slipped a fine pass through to Thomas Eisfeld, the German took it on and finished smartly into the bottom corner.

Some poor Arsenal defending from a set-piece allowed West Brom to equalise not long afterwards which meant that the bone-chilling prospect of extra time loomed and became reality. We then had a chance to score again when Gnabry put Bendtner through but he looked like a man who hadn’t played in a while and took one touch too many, allowing the defender to get back and make a tackle.

In the final 15-20 minutes the game opened up a bit as players got tired. Arsenal had brought on Akpom and Olsson before the 90 was finished, and when Arteta got cramp we replaced him with Hector Bellerin, a right back filling in in the most important midfield position. Towards the end we were hanging on a bit, Morgan Amalfitano hit the bar for the home side, but in the end it came down to spot kicks.

After West Brom scored the first, Bendtner stepped up and equalised. They scored again, a clearly knackered Gnabry (Knackbry?) saw his saved before they scored again. Kriss Olsson, under pressure, coolly slotted home, before the next West Brom man stepped up and blasted his kick wide. Akpom, just 17, scored his to make it level and then Amalfitano repeated the smash it wide trick which meant Monreal had the chance to win it for Arsenal.

Short run up, quality penalty, and the Spaniard clinched the victory. Not a game that will ever be remembered for much more than the character of the team, especially some of the kids, and the reward is a home game against Chelsea in the next round. Afterwards, Arsene said:

We played with many young players and they have shown that not only are they good football players but they can fight as well. The penalties were a bit of a lottery but overall I think the most important thing for me is we played well during the game and the young players came out and showed they can play in the style we want to play.

It’s traditional that the kids are the ones who catch the eye in this competition, but for me it was the experienced heads who made the difference throughout. The back four were solid with Mertesacker and Jenkinson outstanding. Fabianski and Arteta did well, and although he missed that chance late on, I thought Bendnter’s overall game was pretty good for a guy who hasn’t played in a long time.

He worked hard, won headers, chased back when required, brought others into play well and got himself a fine assist for Eisfeld’s goal. It’s still hard to see any real long-term future for him here, but if he’s willing to put in a shift like that between now and the summer (or January), at least it gives us an option.

Beyond that I thought some of the youngsters really struggled to make an impact on the game. Eisfeld, goal aside, was completely anonymous, frustrating Arteta and Bendtner at times with his lack of movement and his lack of strength was evident too often. And on the flanks both Gnabry and Ryo worked hard but completely lacked end product. Some of Miyaichi’s passing was genuinely bonkers while the German found himself robbed of the ball time and time again.

Isaac Hayden, debuting in midfield, did pretty well I thought, and in extra-time, when the pressure was really on, Olsson, Bellerin and Akpom certainly added something to the team when legs were getting tired.

But this is observational rather than critical. Finding it hard in games like this is part and parcel of the learning process for players who are still very young and very inexperienced. They need nights like this to show them how far they have to come and how much work they need to do to make the first team grade at Arsenal.

What you can’t fault in any of them is spirit and character. They tried hard and for Olsson and Akpom to score their penalties so well was fantastic. I was surprised Gnabry took one, he could barely walk by the end of the game, but he had the stones to put his name down and fair play to him.

Overall, while a penalty shoot-out win is always enjoyable, the game itself felt like something of a chore and isn’t one likely to get too many replays. We had a very cobbled together team out there but got the result we wanted/needed. Now, onwards to the next game, which sees us make the trip to Swansea this weekend.

More on that game tomorrow and Saturday, and, of course, in tomorrow’s Arsecast. Until then.