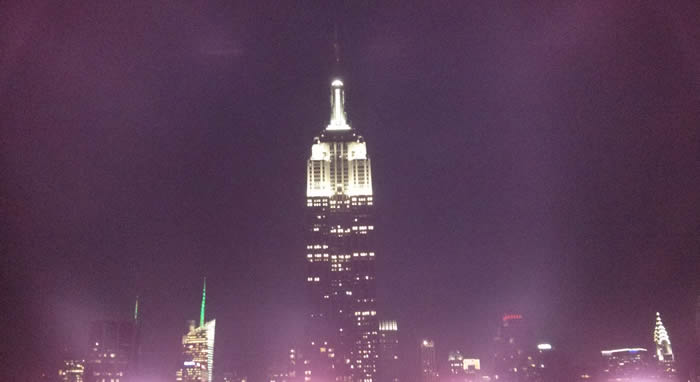 Morning all, and it’s a return from me after a splendid few days in New York. What an amazing city it is. Forget about naming it twice, they should have named it about 8 times, but that would have made the song ridiculously long.

I caught both our games in the Blind Pig along with the awesome New York Gooners. If you’re ever there and need somewhere to watch the Arsenal, the welcome is fantastic, the beer is good and the atmosphere brilliant. And there’s an awesome pizza place just up the road too. What more could you want?

The results have been good in my absence. Ramsey keeps scoring, we stoked Stoked and went top of the league, and things, in general are going very well on the pitch. It’s what’s happening off it that continues to cause concern with a raft of injuries that you just can’t help worrying about. The second half against Stoke, for example, saw us sit back and let them have more of the ball, and it’s hard not to think there’s an element of fatigue involved in that.

The players we’ve used have done fantastically well, but the inability to rotate as much as we might like is going to make for weary legs. The other thing is that as well as affecting performance, tiredness can lead to injuries which is something we really need to avoid as much as possible.

I think that will be reflected in tonight’s team for the Capital One Cup against West Brom. There are going to be ‘first teamers’ involved, but I think it’ll be the likes of Arteta, Vermaelen, Monreal and Jenkinson who have been out through injury or the form of others and need to play. Those who have put in the shifts in recent weeks will be given time to rest, as much as possible.

I don’t think we’ll see Ramsey, Wilshere, Sagna etc unless absolutely necessary and even then I wonder what conditions the manager might consider necessary. Is he going to chase the Capital One Cup if we’re a goal or two down? If they’re needed as replacements then maybe, but this is what he has to weigh up when he’s got a small squad badly hit by injury.

The news yesterday that Theo Walcott would have to undergo surgery for an abdominal injury is a blow, especially after his fine goal against Marseille last week. To be without him, Cazorla, Podolski, Oxlade-Chamberlain and Rosicky all at the same time will stretch us. It gives chances to Ryo and Serge Gnabry, who did quite well against Stoke, but also puts pressure on them to perform.

Up front Giroud will surely be rested and due to injuries to Yaya Sanogo, Theo Walcott and Lukas Podolski, the boss has little option but to play Nicklas Bendtner. The player himself spoke last week about how he was grateful for a new chance, while the manager has been reminding people of his ability, saying:

I personally believe in his qualities. It’s just down to attitude and fighting spirit. When he has that, Nicklas can be an unstoppable striker. He gets his chance. Our job is about that. Take your chance. Fans forgive you everything as long as you produce the performances on the football pitch. That’s what people want. I think our fans have a positive attitude towards Bendtner and they will be behind him. Only you can create that with your performances.

He is, as it stands, second highest overall scorer at the club. Only Theo Walcott has scored more, but Bendtner’s career has been something of a car crash over the last couple of seasons, sometimes literally. Underneath it all there’s a half-decent player in there, but he’s been so blinded by self-aggrandisement and ego that it’s been a long time since anyone saw that.

And the reality is that if other options had been available, it’s unlikely we’d be seeing him. He’s been a contentious, divisive figure even at the best of times. When he did have a good run in the centre-forward position a few seasons ago, he did well, scoring 9 times in 11 games, but that was 2009-10. Almost an era ago in footballing terms, and it’d be optimistic in the extreme to think he could do something similar after such a long spell without first team football.

But all you can ask of any player who pulls on the shirt is that they give 100% and if he does that, at least, then I guess it’s something. Clearly it’s not an ideal situation, it harks back to the summer but there’s little we can do about it now other than get on with what we have and hope for the best. And despite the mockery, I quite like his scruffy beard.

I think it’s going to be a fairly tough night at West Brom who, if they have any sense, will know that Arsenal’s team is likely to be cobbled together and will surely lack the fluency and cohesiveness of the team that sits top of the table. They might want to rest some players too, but I think they’ll put out as strong a team as possible which should make tonight interesting, to say the least.

I’m not 100% if there’ll be a live blog for this one, it doesn’t seem to be on TV but assuming I can find a stream we’ll get something together for you.

Finally, a big thanks to Tom for holding the fort here while I was away, and to the Arseblog News Hound for keeping things going over there. Top blogging. Their reward is an all expenses trip to York. The old one. Which is still a nice place, but a lot less skyscrapery.

Until later, or tomorrow.

I am still laughing at Diego Costa