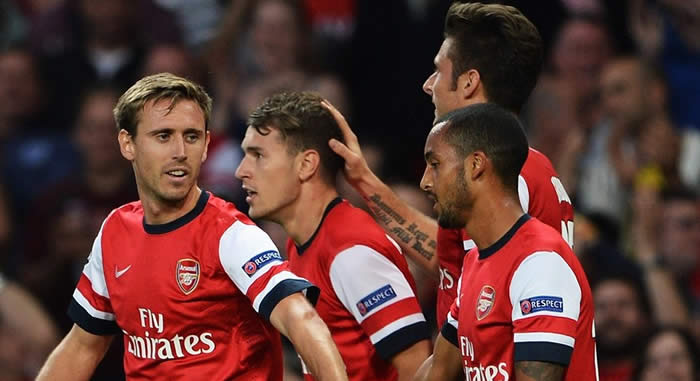 all eyes will turn to the Champions League after the win over Sunderland at the weekend, but there’s still some nicey stuff going on after our fifth consecutive win of the season.

We touched on Aaron Ramsey yesterday, and how much he’s clearly enjoying his football at the moment, but obviously the reaction of and to Mesut Ozil is still something people have great interest in. Ramsey himself said:

I think he showed what he’s all about today slipping those little balls through. He’s a fantastic player and is very gifted. He’s going to create a lot of opportunities for us. He has a wonder of a left foot. He caresses the ball and the passes seem to be of a perfect weight and right into people’s strides.

That last part was very obvious on Saturday, the weight of his passing was Pirestacular in a Bergkampmungous style, and once he’s able to communicate properly with his teammates it’s going to be a joy to watch him slice open defences in the Premier League.

Meanwhile, Arsene Wenger, who can speak German with the new boy, said:

He is a great player and there is a lot more to come from him. He told me after the game he enjoyed it but he had a good idea of what to expect. We have a game that’s based a lot on movement and he gives everyone time to be available on the ball. It’s a kind of technical security and a creative side to his game that is very interesting. His final pass and his retention of the ball gives everybody time to move.

It’s interesting to hear Arsene refer to him, and the signing, as ‘a huge lift for everyone who loves our club’, and of course it is. To attract a player of his quality, and pay that much money, isn’t how Arsenal have done things in the past. Not only is it a brilliant signing but it signifies a sea change in the way we’re prepared to do business.

However, as amazing as it all is, I don’t think anyone would be feeling anywhere near as good if results hadn’t been so good since the defeat to Villa on the opening day of the season. Two tricky Champions League qualifiers, a difficult trip to Fulham and a North London derby against some prematurely crowing cocks meant that things could have felt a lot different, even if we’d signed Ozil on deadline day.

You have to give credit to the players tasked with winning those games for ensuring that the feelgood factor was so feelgoody. Olivier Giroud for his goals, Aaron Ramsey for stepping it up big time, Bacary Sagna for filling in at centre-half when needed, Wojciech Szczesny who has put first day jitters behind him to provide a more solid platform … you could go through the team and hand out gold stars really. And after such a reaction to the Villa game, and the pressure it heaped on everyone, you have to give them the props they deserve.

Ozil now looks like something more akin to icing on a cake than someone who will paper over the cracks as many suggested. Of course neither extreme is true, but in the midst of the Ozilorama, let’s not forget the players we do have. Perhaps underestimated, but hopefully not unappreciated.

Meanwhile, there’s good news ahead of the trip to France this week with Olivier Giroud declaring himself fit for the game against Marseille. Speaking about his injury, he said:

It is not bad. I twisted my ankle but, fortunately, it is nothing major. Marseille? Yes, I am OK, I will be fine.

Good news indeed, and very welcome, obviously. The lack of a real striking alternative is one which will leave us wincing every time he gets a kick or goes down under a challenge. With Yaya Sanogo injured and still some way from finding his feet in English football, and Chuba Akpom in the very infancy of his career, our next best option looks like Nicklas Bendtner.

Leaving aside his obvious character flaws, it’s not the worst option in the world. Would I prefer we’d moved him on and brought someone else in? Of course, but I think the nonsense that surrounds him, and the way he’s allowed his career to become something of a joke, masks the fact that he’s not the worst player in the world by a long way.

If he can get focused and fit – and I realise those are two big IFs – then we might have some kind of cover until January when all our efforts should revolve around a signing in this area. With his contract running out next summer, it’s shop window territory for him also, so perhaps that might speak to the part of him that likes to earn a lot of money.

It’s hardly an ideal situation, and he is recovering from minor surgery, but right now we’re very much in beggars/choosers territory. Let’s hope it’s not something we have to countenance very often, if at all, but if needs must I’m not sure what choice we have.

Right, that’s yer lot for a Monday. Till tomorrow.