Just how do you go about replacing your best player? In a sense, Arsenal too are readjusting to losing their best two players in recent times but Tottenham’s answer to losing Gareth Bale is to forget that he was even there.

It’s true that Tottenham have benefited from the massive windfall his mega-transfer has afforded them, signing seven players for approximately £100m, but coach Andre Villas-Boas hasn’t really attempted to replace those strengths Bale gave them directly. Instead he has tried to improve on those things Spurs are already good at.

Last season, Spurs had the best shots taken to shots allowed ratio, and their two 1-0 wins in the first games of this season, highlighted their efficiency. Yet, last season, they were highly indebted to Bale’s awesomeness, scoring chances that they wouldn’t have expected goals from, and that dependency hasn’t really look like it’s been replaced – their only two league goals have been penalties. And against Arsenal on Sunday afternoon, they hardly created a noteworthy chance.

Indeed, that’s the thing with team building; it takes time for new players to adjust, to each other, their habits and automatisms. Arsenal know that themselves, having constantly had to rebuild in the last seven years after losing key players, which is a massive issue for them considering their game is all about understanding and harmony. Yesterday, we saw perhaps belatedly, those shapes starting to form into coherent body.

Up front, Olivier Giroud had a fantastic game, stretching the Spurs defence and on the main, accurate with his neat flicks and touches. His goal separated what was an even start to the game with both sides looking to impose their respective strengths in midfield. Spurs’ powerhouse midfield trio combined brains with brawn, keeping the ball well, but were unable to break free of the rigidity their system imposed on them. 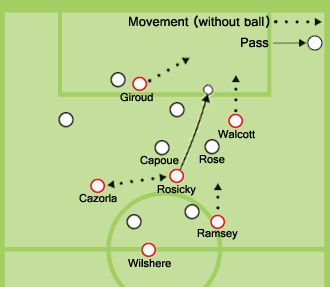 Arsenal, on the other hand, looked more fluid if a little less composed. The midfield three of Rosicky, Ramsey and Wilshere became a four when Santi Cazorla drifted inside, and Arsenal were more fluent. Their goal showed Arsenal at their best, with Mertesacker starting the move with a block-tackle on the edge of his own box and that sparked Arsenal to clinically move the ball back-to-front with breathtaking speed. Wilshere knocked the ball to Cazorla, Cazorla fed it to Rosicky and suddenly the space opened up. The Czech playmaker played a through-pass behind the defence to Walcott and his cross was deftly met by Giroud to put home.

The rest of game, especially following Wilshere’s injury, followed a specific pattern; Spurs punched and Arsenal counter-punched. Yet, there was a more obvious pattern and that was the ease at which Arsenal could execute the same move over and over again to get through the Spurs defence. It’s better explained by Michael Cox of the Guardian, where he highlights how Santi Cazorla would frequently cut infield to exploit Walcott’s pace (and the space behind Tottenham’s backline). However, I feel it’s better to talk about why Arsenal’s system is set up in a way to purposely exploit that type of move.

In a way, you can split Arsenal’s system into three composite parts – like a lopsided 4-4-2: the defence, the midfield four and the two furthermost players. The midfield four look to get close to each other and combine with quick exchanges while the two strikers remain up the pitch to always provide an outlet. Giroud often does that by acting as a pivot to bump passes off while Walcott is always a menace with his pace.

Against Tottenham, there was a constant interchange between the midfield four, set in motion whenever Cazorla moved inside. That then became the signal for the other midfield players to move into the space that his overload created. The quartet, especially in the first-half did this very well, switching positions seamlessly. Indeed, in one move, Ramsey ended up on the left flank, with Rosicky then moving in alongside Wilshere and Santi Cazorla pushing highest up. Cazorla is probably the key player, with Wenger saying he plays him on the left because he knows “where exactly to move on the pitch.”

In the defensive phase, the team is less fluid as they look to make a 4-4-1-1 shape when possession is lost. Walcott drops back into a four (his tracking back of Danny Rose was superb in the derby) while the most highest midfielder, whether that’s Cazorla or Rosicky when the former drifts inside, presses the deepest midfielder, attempting to stop the pass out. Indeed, such was Arsenal’s fervour to stop that pass – it was Capoue who played that role for Tottenham – that Cazorla unfortunately injured the midfielder in the second-half and he had to go off. If Arsenal don’t get it back in “three seconds” as Rosicky says, the formation then becomes a 4-5-1 and Arsenal defend in a more orthodox compact block

It was Arsenal’s defensive game which came to the forefront in the second-half as Tottenham piled on the pressure, and Mathieu Flamini’s introduction strengthened that effort. Arsenal’s attacking game suffered slightly in the second-half, but they showed in good periods in the North London Derby, how beautiful that could be. With Mesut Ozil joining the club, Arsene Wenger’s grand plan is starting to take shape.