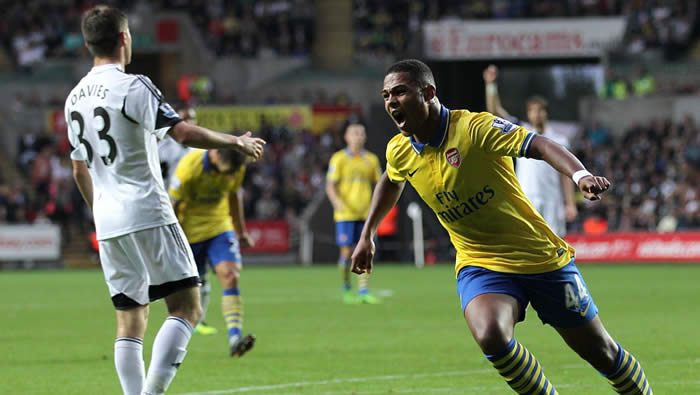 So, we’re back on top of the league after a 2-1 win over Swansea yesterday at the Liberty Stadium.

In my preview I said I didn’t think the teams would cancel each other out, but in the first half that’s precisely what happened. Lots of possession, lots of passing, but few chances. Not for the want of trying, but both defences played extremely well, snuffing out attacks before any real danger could be created.

There hadn’t been a shot on target for the entire 45 minutes when Serge Gnabry took matters into his own hands and dribbled at the heart of the Swansea defence. This created a chance for Giroud which the Frenchman really should have scored from. Instead he dragged his shot wide and looked to the skies in desperation. It was not the fault of the lovely clouds.

It was the young German who had the game’s first shot on target, early in the second half, drawing an easy enough save from Vorm, but it was a taste of things to come. After a solid spell of possession Arsenal worked the ball in front of the Swansea back four, got a little lucky with a rebound that fell to Ramsey but the Welshman’s first time pass into the path of Gnabry was perfect. There was no look to the heavens as he drilled it into the bottom corner to make it 1-0.

Another Ramsey pass, after a storming run, set up Mesut Ozil for what should have been his first goal for the club. With just the keeper to beat he waited just a bit too long and took the wrong option, firing his shot at a height that made it relatively easy for Vorm to make the save. But Ramsey’s influence on the game wasn’t finished and he doubled the lead a couple of moments later.

Szczesny bowled the ball out quickly, it came to the Welshman in midfield, he flicked it towards Wilshere and as nice as that flick was, it ended up very much a 50-50. Jack crunched in, won the ball, traded passes/flicks with Giroud who set up Ramsey who stepped inside the defender and blasted home his 8th goal of the season. The man is unstoppable right now and it’s a glorious thing to see.

After that we sat back, confident that we could deal with whatever they threw at us. Defensively we were solid. Szczesny made a great save from Nathan Dyer but when their left back went on a run and Sagna failed to track him into the box they got a goal back which made the last 10 minutes a little bit nervy. However, the defence which had been solid stood firm, Wojciech Szczesny in particular stood out as he confidently came for crosses and corners which really eased the pressure.

In the end we hung on, took the three points, continued our amazing away run, and went back to the top of the league as results around us were jolly favourable indeed. Afterwards, Arsene said:

It was a question of being patient without making mistakes. After we were much stronger and playing at our level. We took advantage of the chances we have created. We have substance in the team and we could see that today in the second half. We came out with purpose in our game and that was important. Our spirit has been tested after the first home game of the season but the way we have responded is very positive.

The turnaround has been fantastic, and this is clearly a team that is feeling its oats at the moment. Despite injuries, a small squad and a lot of pressure to deal with, they’ve played better and gained results that looked unlikely a few weeks ago.

The defensive side of things has been so vital. Yesterday, I thought the back four and keeper were superb. Intercepting, nicking the ball, reading the game, cutting things out in crucial areas before they could become dangerous, but that was true of every single player. Witness Flamini’s cynical, but hugely enjoyable, foul on a Swansea player halfway inside their half. It earned him a yellow card but it stopped what might have a threatening Swansea break.

Aaron Ramsey catches the eye every week with his game and his goals and his tackling, so I don’t need to say too much about him, but the man of the match for me yesterday was Serge Gnabry. I didn’t really expect him to start after playing 120 minutes in midweek but he put in a shift that was way beyond his 18 years. Not only did he score, and offer something different in the final third to try and make things happen, but he was just so switched on to what he had to do defensively.

It’s not always true of wide players, especially young ones, so to see him tracking runs, making blocks and tackles, and rarely, if ever, being out of position or shirking his responsibility was great to see. If he can keep that up he’s going to go places and fast. There’s clearly a lot of talent there but that’s true of many players. To work as hard as he did, and to do it with such efficiency and willingness, really augurs well for his future.

But he was ably assisted by the whole team. I’ve touched on the back four, but Flamini was fantastic in midfield and even Jack Wilshere, pushed out wide and the subject of a lazy Sky/Redknapp narrative designed to make you think he was playing badly, played his part in what was a really important victory.

Momentum and confidence are such important factors in football. We’ve got both on them going for us right now and long may it last.