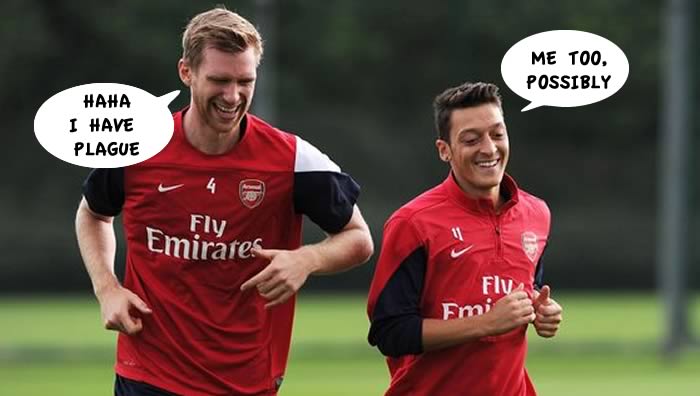 So, after the tedium of the Interlull it all starts again today.

There’s not much that’s exciting about a trip to Sunderland but today should have been a bit more fun because we’d get to see new boy Mesut Ozil. However, there’s a real doubt over his participation. Although he’s travelled with the squad, he’s suffering from illness and it’s hard to say with any certainty if he’ll play a part.

There’s bad news also about Per Mertesacker, also unwell, who has remained in London and won’t be available. Thomas Vermaelen is back in the squad and it leaves the manager with a decision to make. If Ozil can’t start then the midfield picks itself – a trio of Flamini, Ramsey and Wilshere. There’s no Rosicky, no Arteta, no Diaby (obviously) and Cazorla is likely to play on the left hand side.

The only other option I can think is to use Cazorla as the most attacking midfielder, and play someone like Gnabry or Ryo on the left hand side of the attack, but I suspect Arsene will choose his strongest first XI and that doesn’t include either of them. Of course all those pieces go back in the box if Ozil is well enough to play, so fingers crossed.

At the back I’d be reluctant to start Vermaelen. He’s back in full training but the last time he started for us was in April against Norwich, and that was only because of suspension to Mertesacker. He sat on the bench for most of the final third of last season, and I think it’d be natural to have some worries about him today regarding form and fitness.

Bearing that in mind, it’s likely to be Sagna and Koscielny at centre-half with Carl Jenkinson at right back. You might remember Sagna was forced into action in this position during this fixture last year. Jenkinson was sent off, Bac went into the middle and Aaron Ramsey ended up at right back in a game we scrapped a wonderfully filthy three points from in the end. Sagna’s performance was outstanding and, I’m sure, part of why Arsene Wenger considers him an option for that position.

In spite of the absences today you have to hope we make easier work of it than that. We’re in good form, having won four in a row, and there’s bound to be a boost in confidence with the arrival of Ozil (even if he’s a bit under the weather). Sunderland have yet to win the league this season, losing two and drawing one, so if we play well this is a game we should win.

The impact of the Interlull is another consideration. Sometimes it’s hard to pick up where you left off, but that’s part and parcel of things and something they’ll have had to contend with too (although probably on a smaller scale). On today, the boss says:

The job will be to get everybody to recover physically, mentally and – because some players had disappointments – to get them focused again on the club results.

And on the opposition:

They are stable in this League so, after three games, you don’t go to any conclusions. Sunderland will certainly be mid-table at the end of the season because they have good players.

It’s typically been a difficult day at the Stadium of Light over the last few seasons. The games have been tight, sometimes contentious, and we’ve made life difficult for ourselves with red cards, missed penalties and more. The last time we went there and won comfortably (in terms of the scoreline) was 2005-6. It’d be nice to do that again today, but I think with di Canio under some pressure to get a win, and at home, this is going to be another one of those games where we have to really dig in to get the points.

Thankfully we’ve shown that’s something we’re well capable of in recent months. I think we can take three points today, with or without Ozil, but it’d great to see him make his debut.

Come on you yellows.

Kick off today is 3pm and as always we’ll have full live blog coverage for you. You can follow the game on your phone, computer, tablet or anything else. Simply bookmark our default live blog page, or check back later for a post with all the details.

And if you fancy betting on the game, sign up with Paddy Power, bet £10, get £20. Click here to register or have a look here for some Ozil specific odds.

Right, that’s it for now. Time to eat some breakfast, walk the dog and get ready for kick off. Until later.