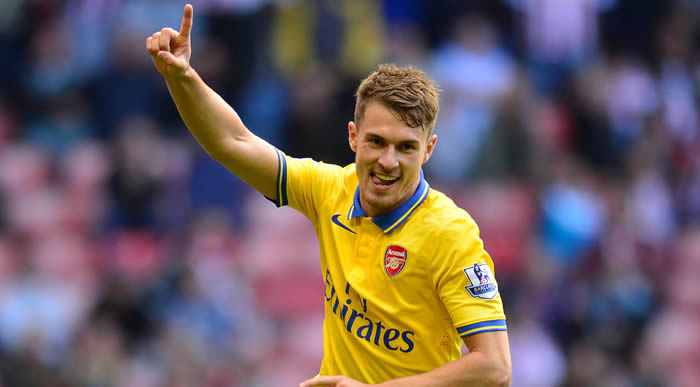 A comfortable scoreline in the end but a game which wasn’t anywhere near as easy as it suggested.

We had bad news before kick-off when it emerged that we’d be without Santi Cazorla (and for the next few weeks), meaning Mesut Ozil, unwell and certainly not up to speed with his new teammates would definitely start. All I can say is if that’s Ozil under the weather, with little or no relationship with any of his colleagues, then I can’t wait to see him when he’s firing on all cylinders.

His control and pass for Giroud’s opener was brilliant. He seemed to click almost straight away with Ramsey and Wilshere in particular, he wanted the ball all the time, created some fantastic chances, and all the while he looked like a guy that wasn’t fully fit. He appeared a bit sluggish at times, understandable if he’s had a bug, and faded towards the end but it was a debut that augurs very well for the future.

The game itself should have been out of sight by half-time. Although Sunderland had some first half moments, we dominated them and but for a rotten day at the office from Theo Walcott we could have been 3 or 4 up at the break. He had glorious opportunities to score and spurned them all, which left me wondering at the time if we might live to regret his wastefulness.

And so it proved. Early in the second half, with Sunderland obviously fired up by the manager, they changed the momentum of the match. A wicked cross from their right saw Koscielny head it out for a corner, from the subsequent set-piece we failed to deal with the ball properly (witness Walcott fail to challenge a header as the ball came out). When it came back in, Koscielny lunged in on Adam Johnson who took a very realistic looking dive and the referee pointed straight to the spot.

I like Koscielny, but he really needs to get this part of his game sorted out. There was no need to lunge in in that area, Gibbs was also covering, the player was going away from the goal, and all he did was make it easy for the ref to give a penalty. When those last ditch tackles come off they’re fantastic to watch, but you should only make them when you really have to and yesterday was not one of those times.

So, they spanked home the penalty and we were rocking for a few minutes. They had one ruled out for offside, and while there’s no question Fletcher was ahead of the last Arsenal defender, watch the replay and see how far behind the rest of the defensive line Carl Jenkinson was. Somebody needs to have a word with him about that. Then there was a bizarre free kick which bounced in front of Szczesny, hit the post, rebounded across goal and screwed wide of the far post before the offside flag went up again.

We needed something to change and when looking at the bench it was fairly obvious it wasn’t coming from there. Instead it came from our best player on the day, and probably our best player so far this season, Aaron Ramsey. He was well picked out by Jenkinson on the edge of the box and his first time volley was the goal of a player full of confidence.

The drama at the other end wasn’t over though. Sagna and Altidore tangled on the edge of the box, it looked a bit six of one, half a dozen of the other to me, but Atkinson decided it was a Sunderland free kick and blew the whistle. Altidore continued and squeezed the ball in but it didn’t count. They were obviously annoyed, and I get that – the advantage rule seems entirely arbitrary.

On the first day of the season Villa were given the advantage a number of times while every time the ref blew a free kick for us he stopped play. Why? But yesterday, the whistle had an impact. Koscielny heard it and stopped running. Had play continued I think he would have been there to prevent the ball going in, so while I understand Sunderland’s frustration, it’s not as clear cut as they’d like to make out.

There was a touch of salt in the wound then as Ramsey got his second a few minutes later. It came from a move involving Ozil and Giroud, borne from the quality of his movement and awareness that his teammates might see his run. Giroud did, the pass was perfect, and he slid it under Westwood to make the game safe. That’s 5 so far this season for him and it’s fantastic to see a player weather such a storm, in such a professional way, and come out the other side of it like that.

Another thing of note is that although Giroud’s goalscoring is catching the eye this season, the improvement in his all round game ought not to be ignored. His hold up play is much better, but so too are the little passes and flicks in and around the box which create chances for others. Hopefully the little knee tweak he picked up at the end of the game isn’t serious, because not just is he our only real striker, he’s really enjoyable to watch this season.

Overall it was a very eventful game and a very interesting one, with Sunderland having a strong and very committed second half.

And of new boy Ozil:

He was sick on Thursday night and I decided only today to play him. He had a stomach bug and didn’t feel well. He dropped a bit physically in the second half but his first half was outstanding.

Clearly there are some things which we can work on in the wake of this game. I love Flamini’s all action midfield work and Sagna at centre-half is a good option, but in the absence of Arteta, and especially Mertesacker, we look a bit more panicked at the back than we normally do. We lack a little bit the calm, it all seems a bit last ditch, but hopefully Per is ready for Wednesday in Marseille.

It might also be worth their time reminding the team that defending is not the sole duty of the defenders. It’s what our fantastic run at the end of last season was built on and although we might have some more attacking verve this season, if we forget the basics then days like yesterday might go a different, more difficult, way.

Still, we sit top of the league for now, and that’s a very nice place to be on a Sunday morning. Till tomorrow.