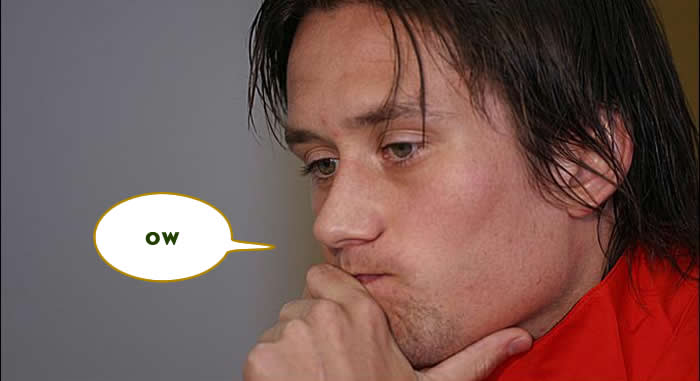 Nothing disastrous happened last night. At least not in my house. Which makes a pleasant change, I have to say. I will, of course, update you should that change but nothing’s falling down just yet.

The Interlull is now over and we wait with bated breath to see who has made it through. There’s some bad news this morning regarding Tomas Rosicky who seemingly picked up a thigh injury in the first half of the Czech Republic’s game against Italy last night. He’s now got to be a big doubt for the trip to Sunderland.

There were some Twitter whispers (no, that phrase cannot ever be shortened to Twispers and anyone who does ought to be fired from a cannon into space without a helmet … of any kind) that Theo Walcott might be a bit knackered too after England’s game against Ukraine but I can’t find much about that anywhere so I assume he’s ok.

It was a good night for the Germans with Mesut Ozil and Per Mertesacker (with an Ozil assist) on the score-sheet against the Faroe Island. It augurs well for when the BFG is pressed into action, Chris Whyte style, as our lone front man. Koscielny, Sagna and Giroud all featured for France, but we won’t know for sure how everyone is until they start drifting back to the club today.

The absence of Rosicky is annoying, but when you consider what we’ve got to replace him it’s certainly not as bad as it could have been. I suspect that Arsene Wenger might have wanted to introduce Ozil from the bench on Saturday but it now looks as if he’ll start. No bad thing really, it’s a game of football, he’s well used to them and the sooner he gets used to the game in England the better.

There’s also some unfortunate injury news for youngster Gedion Zelalem who will be out for around 8 weeks after picking up a knock. That means he’s going to miss the Capital One Cup game against West Brom at the end of a month, a game he realistically could have played some part in due to the lightness of our squad. A shame, but he’s 16, plenty of time ahead of him, and hopefully we can navigate that round so he can have a chance in the next.

One man who didn’t go away this week was Mathieu Flamini and he’s likened himself to wine, saying:

Tony Colbert [Arsenal’s fitness coach] told me after some speed tests, I am quicker than I was five years ago. It was funny because we made a joke that it was like wine, getting better with age.

Well, I hope he Chateau Neuf de Twats the opposition out of it for the rest of the season, unleashing the grapes of wrath in every challenge. I’ll put a cork in it. Sorry. No doubt these wine puns are making you bored … oh …

I do like the idea of Flamini being faster now than he was though. Most of us slow down with age, but he’s speeding up. Like a kind of reverse footballing Dorian Gray. Or something.

Meanwhile, former England U21 boss Stuart Pearce has hit out at Alex Oxlade-Chamberlain for not playing in the U21 European Championships this summer. A tournament in which England lost all three of their games.

Apathy played a big part of it – the Oxlade-Chamberlains of this world, the Phil Joneses, because they didn’t want to come. Once they go through the golden ivory towers of the seniors they don’t want to come and play with the Under-21s any more.

Imagine being a senior international and not wanting to play in a meaningless tournament. What absolute bastards those players are, eh? And what is the point in lashing out at young guys like Oxlade-Chamberlain or Jones? Other than to deflect the focus from your own shortcomings, of course.

Pearce is an anachronistic buffoon who has spent his reign as the U21 manager doing two things: failing, and getting into scraps with managers over the release of players. There may well be problems with the structures he has to work with and the U21 set-up, but the biggest problem of all has been having a manager whose efforts have fallen short time and time again.

I hope he takes over at Stoke. Quite soon.

Right, that’s about that for today. Tomorrow we can get on with the business of looking forward to real football again. Till then.