Felicitations from my sumptuous eyrie here at Gentleman’s Towers. I have only just arrived back from a most remarkable confabulation with our new signing, Mr. Orwell, The Wandsworth Wizard, with whom I enjoyed port and cigars just this very morning.

INJURIES, INJURIES, THEY’RE ALL GETTING INJURIES

At least the poker school should be fun for them. But should we sop employing homeopaths, who seem to be making up smaller doses of the injuries in question, waving a magic wand over the concoction, and then feeding it to the patient. At this rate we will have to play Mr. Orwell in Mr. Robinson’s position. At least Fenton goes to a very good vet. 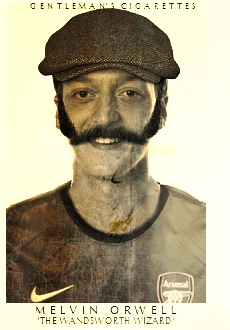 I was lucky enough to be granted an audience with our new 10+1, Mr. Melvin Orwell, at The Arsenal’s training lair, London Colney, yesterday morning. I arrive bright and early at six am as instructed and await Mr. Orwell in an ante-room. Soon he arrives, limping slightly. “Only joking, Gent,” he says brightly. What follows is a transcription of our highly pleasant and stimulating conversation.

MELVIN ORWELL: Thank you. I only smoke before lunch.

MO: (Smiling) In that case, why not. I find a glass of port opens up the nasal cavities nicely first thing in the morning.

AG: Before we begin, I notice you are wearing a pin badge bearing the name ‘Reverend Run and his Damned Magnificent Chaps’. I too am a fan of their syncopated rhythms and witty lyrics. Which are your favourite ditties?

MO: Well I prefer the earlier material of course. ‘It’s Most Certainly Like That, Old Boy’, ‘King of England’, ‘Well This Is Certainly Tricky, Mrs. Ermintrude, and  ‘Walk This Way, Fine Madam’. You?

AG: I do like ‘My Church’s Brogues’, ‘You Look A Bit Peaky’, and ‘Can You Waltz It Like This’. But anyway, we digress. Welcome to The Arsenal!

MO: Thank you, it really is wonderful to be here. The other English chaps I knew already of course, Lord Meatlocker, Ponsonby. Young Knabbley. They’ve made me feel very welcome.

AG: You were reassuringly expensive. Are you flattered by the 42 Million Guinea fee?

MO: I think what’s most pleasant about it is that it’s real money, from Arsenal supporters in London and around the world, actually coming to games, buying replica shirts and all sorts of horrible tat from the official shop. Have you seen some of the dross on there? Honestly, if it didn’t have ‘Arsenal’ written on it you’d walk past half of it if it was for sale at a street market. But people buy it, with real money, Arsenal’s money, earned fair and square, and here I am. As opposed to laundering the reputation of an oppressive middle-eastern regime, like the Abu Dhabi Vulgarians in light blue up there in Stockport, or worse, the dark blue of Russia’s plundered petrochemical wealth down in Fulham. I can’t believe it’s been ten years since Chelsea were formed, by the way. Hasn’t time flown?

AG: Quite so. (We clink glasses) You mentioned the dreadful duo there, FC Chelsea 2003 and the light blue plastic fakery XI. Were you pleased with the result against Tottenham?

MO: I almost gave myself a hernia from laughing, especially knowing what that horrible little shiny-headed demon Levy was up to. £110 million on that gang of journeymen and rejects. What is the point of Mr. Chadli by the way? Is he actually a footballer at all? What bad luck Spurs have. It’s as if they have some kind of curse on them. Maybe they opened The Tomb of Tottenkhamen a hundred years ago and a mummy cursed them forever. I mean, a couple of years ago they had a run of bad results and burned down their own town! You couldn’t make it up.

AG: You turned down United.

MO: You bet your sweet buttocks I did. Now they’ve lost their third leg, you watch them drop.

AG: We know a little about your legendary through-ball, The Mesmertron. I know for a fact that many Arsenal supporters have been on Mr. You’s Tube pretty much constantly since your signing, drooling at the compilation films.

MO: I have to turn the sound off on those. Why is the music always so awful? Anyway. Yes, The Mesmertron. I go into a kind of trance state, where I am hyperaware of the positions of all other 21 players on the pitch. Time slows. I am somehow able to imagine the millions of permutations of play which are possible in the next five or so seconds and I pick the right Gentleman’s Favour. It often, well, mesmerises our opponents, which is flattering. It’s easier in some cases of course, you can hypnotise John Terry just by drawing a chalk line between his legs. But I’m hoping to unleash a few Mesmertrons this season.

AG: We look forward to it very much. Finally, Gareth Bale – worth £85 million?

AG: Thank you for your time. Best of luck agin the Red Geordies on Saturday.