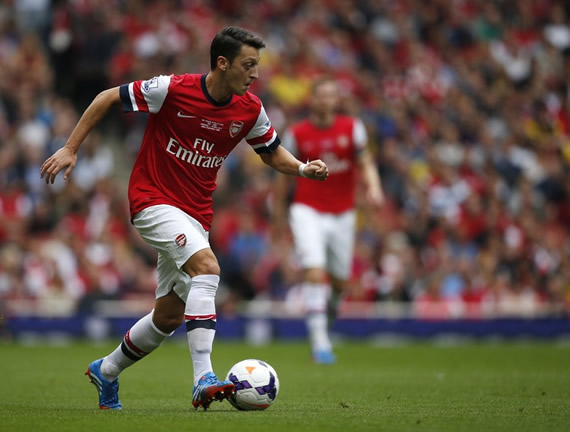 A good home performance from Arsenal yesterday saw Mesut Ozil claim assists for goals by each of Per Mertsacker and Bacary Sagna, and have a significant contribution to the other*, which was yet another strike for the oh-so-close-to-literally-being-on-fire Aaron Ramsey – and one that against that particular pack of cunts I’m sure’ll have found more than satisfying.

The news that Nicklas Bendtner would be on the bench for the game was trumped by the announcement that Theo Walcott wouldn’t even get that far, having picked up a groin/pelvis injury in the build up. Theo was expected to start the game by most, so it was a  surprise to see him in the stand. This afforded a start to young Serge Gnabry, a player who showed a lot of strength and commitment, and a lot of presence – “the boy done well” – and definitely looks like another very welcome option.

That particular change was the only one from the game in Marseille, with the rest of the line up as predicted yesterday. Ozil got his home debut, and my how he responded to that challenge. Within five minutes he had a free kick from just outside the box which he tried to curl in, Begovic only able to parry straight into the path of who else but Aaron Ramsey and his smart finish squirmed under the goalie for a lead inside five minutes.

The game settled down a little after that, until something of a brain freeze saw Mertersacker let the ball fall over the top to the striker who displayed excellent technique to smash it first time against the post. The ball rebounded out to Cameron and his first time shot found the back of the net from about 20 yards.

So, 1-1 and time to sart over again. Up stepped Ozil, who decided enough of this, and set up another goal, again coming from a set piece, a perceived weakness of this team under Arsene Wenger. It was quite the turnaround from the usual pattern of events in games between these two teams. Normally it’s us that play all the football, only to be robbed by set pieces from a Stoke long ball and flick on, but this time round all three of our goals came from a set piece; Ramsey’s from the free kick, and both Sagna and Per’s efforts coming from Ozil corners.

Stoke on the other hand, were playing football you really don’t associate with them in recent history, or with Mark Hughes, and it was interesting to see them playing the ball around, trying to keep it on the ground – and without wishing to sound complimentary to Orcs, credit to them for that. They didn’t have any real penetration though – there were few moments I was genuinely worried – but while they still booted several of our players to the floor (one ‘challenge’ by Huth on Gnabry in the second half notable for its cowardice and malice), there was much less of the long ball nonsense from the Pubis era. The Orcs, it seems, might at least be trying to evolve. But, you know, fuck them.

The reverse of styles between the two clubs – in terms of Arsenal scoring from set pieces – was very interesting. For many years now, Stoke (amongst others) have tried to bully us out of games – long balls, long throws, a physical game that crosses the line very frequently indeed, and a reliance on set pieces, yet it was us that scored from three set pieces, and them that scored from open play. I think what that tells you is that we can win however we need to – Stoke are, for now, still limited to one type of game, and telling them to play expansive, passing football is like trying explain the merits of a piece of art to a dog: hard work.

To be completely honest though, they really did try and play a different type of game today, and it was quite refreshing to see – there wasn’t a long throw-in in sight.

Nine minutes before half time, another Ozil corner found Per Mertesacker at the near post and his flicked on header deceived Begovic and went in. It was just rewards for the German, who’s been excellent so far this season, and he looked like he enjoyed it.

Stoke had a sustained spell of pressure at the beginning of the second half, during which we were lucky not to concede, but then Bacary Sagna popped up in the middle – again from an Ozil free kick – and somewhat against the run of play, looped the ball over Begovic into the far corner. It was Bac’s first goal in 19 months, and he was undeniably delighted. Get that man an extension to his contract, Arsene! No more fannying about.

Ryo Miyaichi, Nacho Monreal and Mikel Arteta all got on the pitch as the clocked ticked down, before Ramsey almost added a fourth. Having been put through, he smashed it at Begovic from a tight angle, the keeper was just able to put it over the bar, and and the resulting corner came to little.

After the game, Arsene Wenger was gushing in his praise for his new record signing:

When you look at Özil’s numbers, the assists are not a coincidence – it is a reality of his game. When you play against Stoke you don’t expect to score three goals from set pieces but it shows how important his delivery is, and I believe once he has completely integrated you will see even more. He has shown today that he is a great player.

And it’s hard to argue with that. His contribution today really was stellar, and if we’ve finally got someone that can deliver a ball in from a free kick or corner, that’s fantastic news. Lots of people thought Ozil was a type of player in which we were well-stocked, but he’s set up three goals and now leads the assist charts in England.

The manager also admitted that, as I suspected, Jack isn’t entirely fit:

Jack played now five games. Normally I should have rested him today but he did fight very hard and he was a bit exhausted in the end and that’s why I decided to take him off. Certainly I will not play Jack on Wednesday, we have to rotate the squad because we play again on Saturday and after that we have a massive home game in the Champions League. On Wednesday I will of course rotate the team.

And I think that’s entirely right. He’s played a lot since coming back from his injury, and I remain convinced if Santi Cazorla were fit, we wouldn’t be asking quite so much of Jack right now. He’s young and keen to be out there playing, but we have to look after him if we can. Fingers crossed the Spaniard can get well soon and give Jack the well deserved rest he needs.

So, another delicious three points, some decidedly unhappy orcs (the best kind; but then wouldn’t you be unhappy if you had to go home to fucking Stoke?!), and there was something else but I’ve forgotten what…

Oh yes, that’s right: we are top of the league. After the first game of the season, and now five in, how many people would’ve bet on that particular stat? Perhaps he’s not gone mad after all.

Till tomorrow, when I’ll be here for the last time (I think), before normal service is resumed by the globetrotting Blogs, who I’m quite sure is preparing to reward me with a similar, all expenses paid trip to New York (admittedly we still have to work out the details, but I think you’ll agree it’s the least he can do).

Happy Monday, Gooners. Have a good one.

*I don’t believe rebounds count as assists. Please feel free to correct in the comments.