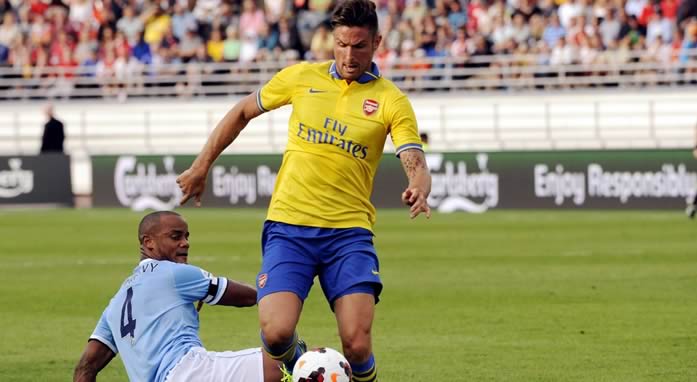 Wakey wakey, rise and shine. Here it is. The start of a new Premier League season.

Ok, so the summer didn’t go as we had hoped and given the injuries and the lightness of the squad it’s easy to fear the worst for today, but let’s have some faith in the 3 players we have left (I kid, I kid).

In terms of today’s team, we’re without the important Mikel Arteta after the manager confirmed his injury could keep him out for quite some time, and he’s added to the likes of Monreal, Vermaelen and the long-term Diaby. Other than that everyone’s fit according to the boss. Sky Sports reported we’d be without Bacary Sagna but he was involved in first team training yesterday so I assume he’s going to be ready.

With that in mind, I think we’ll see a team of: Szczesny – Sagna – Mertesacker – Koscielny – Gibbs – Ramsey – Wilshere – [Someone] – Podolski – Walcott – Giroud

Before you go checking the newswire to see who this ‘Someone’ is, it’s the only area of the pitch where the choice is not obvious. He could use Rosicky, he could play Alex Oxlade-Chamberlain deeper in midfield and push Wilshere forward behind the striker, or, despite having only arrived back from Ecuador late on Thursday, use last season’s only Premier League ever-present, Santi Cazorla. If I had to guess I’d say he’d go with the Spaniard because we’re clearly a better team when he plays.

Per Mertesacker will captain the side and at least our back four is an area that has been spared serious problems. We’ll be looking for that Mertescienly axis to pick up where it left off last season, while Gibbs and Sagna maraud forward when we’re in possession. The Frenchman’s availability is good news as he’s looked much more his old self in pre-season and since he joined he’s been one of our best and most consistent players.

In the absence of Arteta, I’m assuming that Aaron Ramsey will be used in that role, and while his improvement has been obvious, his game is based more on harrying and chasing, and he’s going to have to be disciplined today. Arteta’s positional play means we’re no longer cut open down the middle, as we used to be when the likes of Song went walkabout, so that’s something the Welshman will have to work on.

I think the Man City game last weekend is the blueprint. Work hard when we don’t have the ball, look to hit Villa quickly when it breaks down, and try and maintain the increased efficiency we showed in front of goal. Giroud’s strike, for example, is the perfect illustration of that. The long ball from Walcott created an opening rather than a clear-cut chance, but the Frenchman made it count.

Last weekend, against a team that will most likely be challenging for the title, we played extremely well and there was a lot to be encouraged about. Of course it’s not ideal that we haven’t added players but for the 90 minutes today there’s nothing anyone can do about that. If things don’t go well, I think we all know how the narrative will be shaped – there’s no getting away from that, or excusing it – but the players didn’t not buy other players this summer. They deserve and need the support while they’re out there.

The manager addressed the issue in his press conference yesterday, but there’s nothing new to report. How many times can we hear the line about working hard without it sounding hollow? We’ll roll the footballing dice later and we’ll find out how they come up. At that point, let the discussion take whatever course it will.

Although my long-term hopes for the team, as it stands, aren’t particularly great (see the season preview post), I think we’ve got enough about us today to take three points. If we can replicate the performance we put in against City last weekend we should be fine. An early goal would certainly be very welcome to settle things down and put everyone in a happy place.

Thomas Vermaelen, in his programme notes, has urged the fans to get behind the team in the stadium today. Ideally it shouldn’t have to be something that needs to be said, but in the current climate I think it’s a welcome reminder. Regardless of what hasn’t been done, I think the majority of people are with this group of players.

The deadwood is gone. The spoofers, chancers and lazy arsed wasters are gone. The ones who aren’t good enough have been sent on their way. We’re light, we’re lacking a bit of quality, but what we have is a decent, honest bunch who will give us 100% today and if things click then I think we’ve got what it takes to be happy at 4.55.

As a new season of football begins, that means the live blog returns. We give you up to the second live text commentary which works on your computer, phone, tablet, digital watch, and pretty much anything you can get Internet on. It’s brought to in association with our chums at Paddy Power.

Check back later for a post with all the details or you can bookmark the default live blog page which will update automatically, beginning with team news around 2pm.

And if you want to have a flutter on first goalscorer, scoreline or pretty much anything else, sign up with Paddy Power, bet £10, get £20. Click here to register.

Right then, time to take the dog for a good long walk, blow off some cobwebs and get ready for the kick-off later. When it comes right down to it, I’m excited. It’s been a long journey to get here during that off-season, but I’m looking forward to it now.

Here’s to three points and all the goodness that brings. Until later.