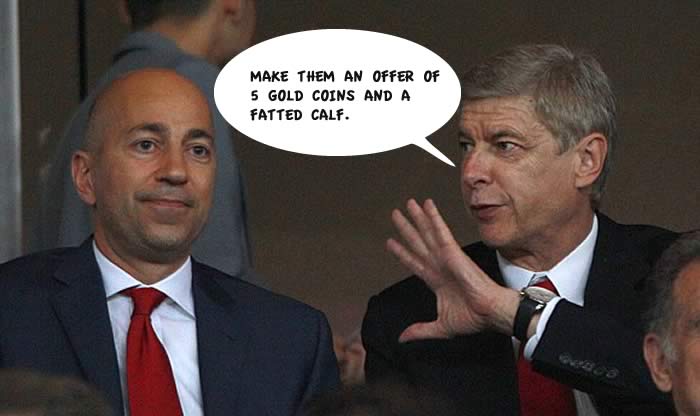 We sit here Monday morning counting the cost of a defeat which has left an already weak squad at breaking point. There are serious injury worries over Alex Oxlade-Chamberlain with suggestions that he’s facing 3-6 months – or the whole season out – having damaged knee ligaments against Villa on Saturday.

It would be a real blow for him, and for us, and he was a player I’d looked at in pre-season as one who could really make some strides this season. He had some impressive cameos in his first campaign, then suffered a touch of second season syndrome, which is quite normal for players his age. But the fact that he started on Saturday ahead of Lukas Podolski was an indication that Arsene Wenger wanted to give him a real chance.

He created our goal, looked lively and to my mind he was the replacement for Gervinho in the squad. To make space for Oxlade-Chamberlain, the Ivorian was sold and the first starting XI of the season showed where he stood in the pecking order. Fingers crossed it’s not as bad as suggested but you can’t help fear the worst.

Meanwhile, Bacary Sagna, Kieran Gibbs, Tomas Rosicky and Aaron Ramsey are all doubts for Wednesday night and beyond. Even if the medical staff patch them up and get them ready enough to play, we’re going into a crucial Champions League qualifier with walking wounded – and you have to worry about the long-term consequences of doing that. How long will Ramsey’s ankle hold up? Rosicky is hardly the most robust of players anyway.

Gibbs has a very deep cut, and I suppose it will all depend how bruised/swollen his eye is, while Sagna, I just don’t know. After that fall he must have damaged something, unless he’s made of titanium, and it’d be a nice, but large, surprise to see him make the trip to Turkey.

When you throw in the fact that all our rivals managed opening weekend wins in the Premier League it compounds our misery this morning [in fact: as I woke up this morning I was having one of those half-awake dreams and I was thinking about how to write about the fact we’d managed up 8 points behind the league leaders after just three Premier League games. I hope that’s not foreshadowing of some kind].

Something’s got to change, right? It has to. The outpouring of anger, frustration and emotion is an indication that something is very wrong at this football club. This was not simply a reaction to a defeat by Aston Villa. This was a long time coming. I’m sure you’ve seen the videos at this stage, but if you haven’t, this man, and these fans from Belgium, capture the mood perfectly.

From bewildered, fractious rage to calm, logical and blisteringly correct condemnation of what we’ve done and, more pertinently, what we’ve failed to do. That’s not just down to losing against Villa in contentious circumstances. That’s people reaching breaking point. There are so many straws breaking so many camels backs in the Arsenal supporting world right now.

One of the by-words of this transfer window was patience. Ill-judged it might have been in hindsight, but it was borne out of a genuine belief that this summer was going to be different. Aside from the very public declarations the club made about their spending power and financial resources, almost to the point of bragging about it, there were private briefings for some.

The Chief Executive sold the story about what we could do, how we could do it, how much we could pay for a player, how much we could pay in wages, and more. Maybe Gazidis believed that’s what we would do, certainly he’s a convincing speaker, but ultimately it’s now impossible to convince people it wasn’t anything other than spin. Those public utterances, those private briefings spread through fans who genuinely wanted to believe, convinced others that there was a will and a desire to spend the money.

Whether it’s a power play by Arsene Wenger to remind Gazidis who’s in charge, or something else, the patience that so many showed, has been exhausted. I believed in this summer. I believed that we had a desire, as a football club, to improve our team. The alternative seemed so utterly incomprehensible. Instead it’s reality we can’t get our heads around.

Arsenal fans have been the most patient around, if you ask me. We’ve tried to understand, we’ve made excuses, we’ve looked at both sides of situations, we’ve supported a club which has, when it comes right down to it, made itself financially powerful and secure through the sale of our best players at the expense of competitiveness.

Now, we’ve got massive commercial deals and sponsorships in place to give us a cash balance which isn’t far short of all the other Premier League clubs combined, and we get nonsense about how hard it is to find footballers better than the ones we have when even the most cursory glance at the transfer business done this summer suggests most of the players on the move would have improved us.

Patience? We’ve got it in spades.

If this were just a footballing issue it might be easier to solve, but stepping back and looking at the club as a whole presents a worrying picture. Aside from the obvious deficiencies in the first team, things look woeful at youth level. Huge swathes of the players were let go this summer, because simply put they weren’t good enough. The famed academy is in a mess, there are worries about the standard of coaching at all levels of the club, we have a manager who refuses to spend, a Chief Executive who, if we’re being kind, appears to be at odds with that but has little or no influence, and an owner who simply doesn’t care enough to do anything about any of it.

You want a change of manager? It’s not unthinkable any more, not by a long-shot, but as long as Stan Kroenke is in charge Arsene Wenger is as safe as they come. He’s got no ambition for Arsenal Football Club beyond protecting his financial investment. If that starts to hurt then, perhaps, he might do something, but right now Arsene makes him richer, makes his shares more valuable, and ensures we’ve got plenty of cash. Ker-ching. The likelihood of any change at the top is infinitesimal, in my opinion.

I wish I knew. I feel sorry for the players we have. Their entreaties for the club to make signings, which began in mid-late July and continued right up until the first game of the season, now look so prescient. It’s almost as if they knew nothing was going to happen and were trying to do what they could. In the end that’s nothing, but I was told they have been craving new faces since the end of last season.

I hope they realise that as the atmosphere turns toxic that it’s not about them. Even if we have shortcomings in our squad, I think most of us appreciate that this a decent, honest group of players who will give everything they’ve got for the shirt. If that turns out to not be enough, then that’s not their fault. It can’t be easy to find form and rhythm in these circumstances and with these demands and expectations.

I’m fully behind them, if not anything else right now.

Given everything we know, the best case scenario right now is that we somehow come through our Champions League qualifier on Wednesday with a decent result. That in the meantime this fabled transfer team that is working ’24 hours a day’ manages to become functional and brings new players in. Yes, it should have been done long before now, but this is the best we can hope for.

We’ve got to convince players, and good players at that, to join a club that is, after one league game, on the brink of a crisis if it’s not there already. A club that had gained so much goodwill this summer – even from some of the most cautious and dubious fans – and lost it all in a horrendous 90 minutes on Saturday. If we’ve had difficulties signing players until now, this is hardly going to make things easier.

Am I confident? No. Not at all. If we’ve been treading calm waters all summer, how are we going to keep our heads above an angry sea? In the meantime, we’ve got to ask the players who worked so hard to get fourth last season, to dig in and grind out the results we need.

Am I confident? Please refer to the previous answer. It’s not impossible, and I hope they can find the spirit and character to do it. I just think that we’re asking a lot of them considering the state of the squad right now.

We plod onwards, refusing to fulfill our potential, refusing to do what’s best for the football club, continuing to lose sight of the fact that we are a football club and not some case-study in how to accumulate money. It’s sad and shameful that it has come to this when it really should have been so different.