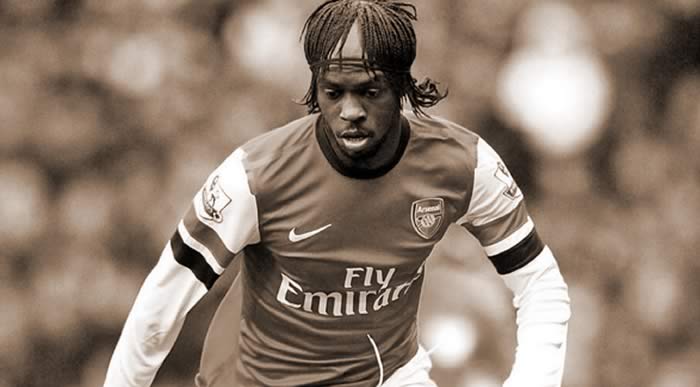 Good morning my transfer starved friends, welcome to another Friday.

I know there’s stuff going on with El Piraña this morning and new comments from the Head of Mugsmasher Corp, but we’ll come to those in a little while. Instead, we’ll start with actual, real transfer news, and yet another player has gone out the door in the Great Arsenal Cull of 2013.

Gervinh0 (full name: Gervais Lombe Arnold Palmer Yao Kouassi) has departed North London for Rome where he’ll join up with his former Lille coach Rudi Garcia. I’m told Gerv spent all summer trying to get a message to him, and in the end it worked. His time with us comes to a close and look, while he wasn’t a bad guy by any means, I don’t think anyone’s going to be too upset at his departure.

Thks to all Arsenal fans for their support during my 2 years as a gunner. Thks to all my team mate and Arsenal staff.

Frankly, I’d have sold him long before now for his inability to write the word ‘thanks’ properly. How difficult is it to add an A and an N? He wasn’t even close to the 140 character limit. Dammit, we have standards, innit. Although I suppose it’s better to leave out a couple of letters than follow a message about how sorry you are about a tragedy, death or horrendous event with a line of exclamation marks.

Yet, regardless of what you think of the old Gerv, and personally I think he’s a player we can improve on, he’s the first one to leave who did have a contribution to make last season. The others had little to do with our season, living life on the fringes, scuttling about like meth-addicted three-legged dogs, but Gervinho scored 7 goals and had 4 assists in all competitions.

Not enough for him to win Most Awesome Player of the Year Award 2013 or anything, but still something, and it’s a something we need to replace. I mean, the idea of letting a guy leave who is ok, but not that great, is to get somebody better to do what he did. My sense, however, and this is not just from picking up on the fact we haven’t signed anyone (bar Yaya – sounds like a fun place to be on a Friday. Come on down to Bar Yaya, €5 Mojitos all night!), is that we’ll look for ‘internal solutions’.

An Oxlade-Chamberlain, Gnabry, Myaichi combo looks the most likely to me, not forgetting the flanks are well covered as it is with Walcott, Podolski and Cazorla all ready, willing and able to do a job in those positions. It’s hard enough to imagine us spending money at this point, even harder to see it spent here. So, it’s ciao Gervinho, benvenuto nobody, and the summer chugs on.

Inevitably, there was more from the most tedious transfer saga on earth as John W Henry went public, once again, about Chompy O’Toole. He says Liverpool have no intention of selling him, that selling him to Arsenal would be ‘ridiculous’, and anyway, they especially won’t sell him to us because we’ve annoyed them by ‘somehow’ finding out the terms of a confidential clause which was anyway.

After his now infamous ‘What are they smoking Tweet’, Henry referenced their ambition to get back into the the top four, saying:

Now, we all know that transfers get played out like this all the time. Managers, owners and officials talk all the time about how players are not for sale, even as they’re in the process of selling them. As Arsenal fans we know that all too well. We’ve done it. And we’ve bought players from clubs who have stated said player is going to categorically stay. That’s the way the market works.

However, as I mentioned the other day, Liverpool could have gone two ways with this whole thing. Reluctant acceptance that getting the money in quickly is probably the best thing, or stubborn intransigence, and they’ve gone down that road. Personally, I don’t blame them. He signed a new contract last summer, pledged his future, and now he wants out. Player power is what it is these days, we all know that, but who amongst us wouldn’t have liked Arsenal to bite back (no pun) when put under similar pressure.

Perhaps Henry is just playing the game, coming at us to up our offer to the point where they realistically can’t reject it. Others have pointed out he said much the same about Fernando Torres just after taking over, but I can’t help feeling this is a bit different. Once bitten, and all that (seriously, no pun intended). What if he absolutely means what he says? What if he’s prepared to dig in and not let a player who has acted like a complete twat, let’s face it, walk all over him?

It’s not impossible, especially when you take into account what an absolute chump he would look if he did sell to Arsenal. So, now what for us? Do we stand there, pissing in the wind until the transfer window closes, hoping we can convince him, or do we come to the realisation that we are already soaked in our own urine, go home, change, and try something else?

But what is that something else now? All the other targets have gone elsewhere. Have we gone so far down this road that we have no choice but to keep at it and hope we can convince the ‘smashers to sell? It looks to me as if we’ve annoyed them with the bid we made off the back of information that should have been confidential. If it were us, I’d want us to be standing there giving them the finger, and pretending we couldn’t hear a word they said.

This whole thing feels ill-judged, badly improvised and a massive waste of our time and resources. I simply do not believe that going into this summer that Luis Suarez was part of our so-called plan, yet through our own ineptitude we’ve got ourselves into a mess that we’ll do well to come out of without monstrous amounts of egg on our face. I think we’re looking increasingly foolish here, and when you considered we’re up against Brendan Rodgers, that’s really saying something.

8 days to the start of the new season.

In other news, the draw for the qualifying round of the Champions League takes place this morning. Potential opponents are: Real Sociedad, Pacas de Ferreira, Fenerbahce, Metalist Kharkiv and PSV Eindhoven.

For any new player to be eligible for this game, they have to be signed and registered before the end of Monday, I believe. With the team, and no doubt Ivan Gazidis too so he can be in a photo, travelling to Finland today for tomorrow’s friendly with Man City, I’m not expecting anything to happen over the weekend, so what we have, we hold, and all that.

We’ll have the news on the draw, and anything else that might happen, over on Arseblog News. Bonus reading: Tim Stillman on Arsenal’s priorities for the new season.

Finally for today, the winners of the print competition are: James Longhofer (Bergkamp) and Tom Harrison (Henry). Well done to you, I’ll be in touch to get things sorted, and if you fancy one of the prints, do check out Dan’s store for them, and others.