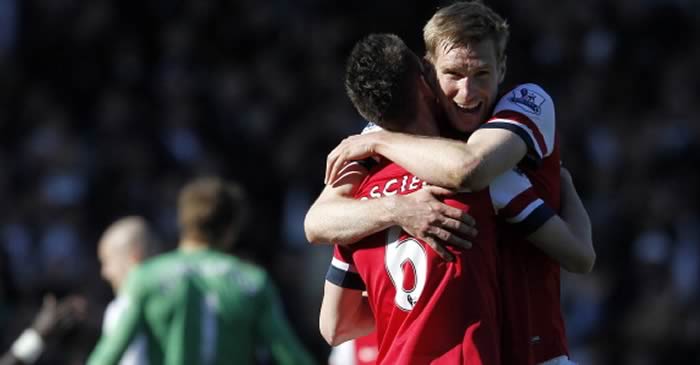 It’s hard to imagine that after the opening day of the season we’re going into our next game with an even weaker squad, but that’s the reality of it as we head for Fulham today.

The injury to Alex Oxlade-Chamberlain and the suspension of Laurent Koscielny means we have fewer options in the final third, and less ability to cope with difficulties at the back. That isn’t to say we don’t have enough to win the game, but a week on, still no efforts made to bring new players in, and it’s a worry.

The team picks itself really. Carl Jenkinson comes in at right back, Bacary Sagna will play centre-half alongside Per Mertesacker and beyond that I think it’ll be the same as the team that won in Turkey on Wednesday night. That means Santi Cazorla and Jack Wilshere both starting again and I do have some concerns that fitness/fatigue might an issue.

I could be wrong but I don’t think Wilshere did 90 minutes once in pre-season, now he’s got to do it three times in a week. Cazorla is still finding his feet after a summer which saw him traverse the globe and miss out on a lot of the conditioning required, but he seems a naturally fit and robust player, so hopefully it won’t be much of an issue.

The return of Nacho Monreal provides us, at least, with one defensive option on the bench, but I still maintain the lack of central defenders is a ridiculous situation for us to be in. A couple of people mentioned to me yesterday that Manchester United started last season with one centre-half, but the difference there is they lost four players to be in that situation. We lost two, and one of those – Vermaelen – we’ve known was injured for weeks.

If anything happens to Mertesacker or Sagna today we’re going to be in a bit of difficulty I think because we don’t have a centre-half on the bench. Hopefully they can come through unscathed, I think they’re both good enough to cope with Fulham today even if I think it’s going to be a big challenge. They drew with us at home last season and even though they played with 10 men for most of the return fixture, it was a nail-biting 1-0 during that excellent run-in.

It’s not going to be easy, by any means, and as I said yesterday it’s absolutely vital we don’t drop any more points. The Villa defeat means that we really have to be looking for a win today, and Arsene Wenger says:

We have to come back to reality, back to normal and win this game. This is a vital game because we must respond to the Villa defeat and recover very quickly. We play Wednesday night and Saturday morning this week. So it’s very important that we get the energy, the dynamism and the focus straight back.

An away game in the league after an away game in the Champions League in midweek is generally a bit of a struggle. Not just for Arsenal, I should add. Most teams find it hard to get themselves going so I think this is one we’re going to have to work hard for.

The partnership between Ramsey and Wilshere needs to click like it did against Fenerbahce, but I also think they need to be more disciplined. Fulham’s midfield will provide more of a challenge than that homeless guy we faced in Istanbul, but in Aaron Ramsey we’ve got a player who is playing well and is highly confident. He tries to make things happen and at the moment that’s working for him, so hopefully he can keep that up.

Up front we’ve got goals in this team. Giroud is in decent form, Walcott and Cazorla are also threats, and if we do need to change something we’ve still got Podolksi on the bench along with the wildcard that is Yaya Sanogo. It’s hard to know what he can bring to the team at this point, but perhaps the fact he’s so unknown and might add some unpredictability to things.

So, while there are genuine worries about the state of the team I still think this we’ve got enough good players to win this one. Of course I said that last week about Aston Villa too, but we did, in some way, contribute to our own destruction there. Today we need to be switched on, fully focused and to play as well as we did on Wednesday (not forgetting that Szczesny played a big part in keeping a clean sheet).

If you can’t see the game or you’re out and about this Saturday, we’ll have full live blog coverage for you. You can follow the game on your phone, computer, tablet or anything else. Simply bookmark our default live blog page, or check back later for a post with all the details.

Other than that there’s very little going on other than the manager talking about transfers, how much players want to join us, how much the Champions League matters when it comes to doing deals and oh look a free Mathieu Flamini haha.

It’s nothing we haven’t heard a dozen times already this summer so let’s just hope we get on with our business today, take the three points, then use next week to go about making ourselves better and stronger ahead of a North London derby and an Interlull. The alternative doesn’t bear thinking about.

Fulham preview: Goalkeeping clarity, but some thinking to do at centre-half

Fulham away: Can Emery find the right balance?