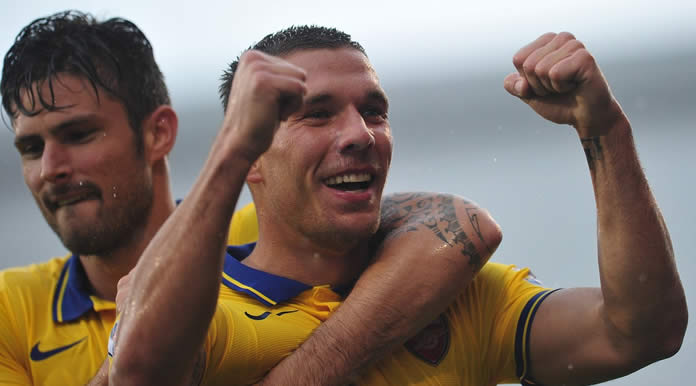 Well, this is a much more pleasant Sunday than last week. Three points in the bag, a decent performance, some confidence boosting individual displays and we could have scored more than the three we did.

Lukas Podolski got a start with Jack Wilshere dropping out and Cazorla moving back into the midfield, and when a player gets a chance and takes it as thoroughly as he did it’s great to see. His goals were excellent. The first a thumping side-footed finish when he followed up a rebound from a Theo Walcott shot, and the second, a low fizzer into the bottom corner, came at the end of a typically sparkling Arsenal counter attack.

The rapidity of our counter attacking yesterday was blinding at times. Fulham just couldn’t cope and the commitment and desire we showed to get forward was fantastic. I also thought this was the most accomplished passing performance I’ve seen from us in a long time. Even last season, when we were grinding out results, we looked a little bit flat during the games. There was real verve to the way we moved the ball about.

Not least because of the midfield. I don’t know that a trio of Ramsey, Rosicky and Cazorla is going to be robust enough for games against bigger and better teams, but against the industrial Sidwell and the clapped out, leaden footed Scott Parker they had a good time.

We know about Ramsey’s renaissance and energy, and that Rosicky will run himself into the ground for the team, but watching Cazorla is just joyous at times. He’s the only man in the league who can play a one-two with himself to get out of a tight spot. His close control is astonishing and he brings so much to this team. Even though he’s clearly not 100% fit yet he’s got to play as much as possible, and if he plays the way he played yesterday then that is a very good thing indeed.

Up top Olivier Giroud got another goal, that’s three in three for him, and although he was a bit fortunate for the opener he showed quick reactions to take the chance. His hold up play was much better than against Villa too, he brought others into play much more often, and his part in Arsenal’s third deserves an honourable mention. That was a sublime piece of close control as we hit Fulham on the break.

At the back we looked pretty solid, although there was period when we seemed happy to let Fulham pepper the goal with shots. After his difficult day against Villa, Wojciech Szczesny has now redeemed himself with two excellent displays in a week. The double save at 0-1 kept us ahead and was top class goalkeeping.

The full backs were good, Mertesacker as solid as ever in the centre where he was more than ably assisted by Bacary Sagna who scornfully resisted Berbatov’s attempts to rattle him (including a quite deliberate elbow in the head). It speaks volumes as to the quality Sagna has that he can slot in at centre-half so easily. So much of playing there is about reading the game and positional play and he was practically perfect all day long. Is there any good reason why we’re not giving him a new contract?

We had a good week because we played a tough game against Fenerbache and a good game today. We played in the way we wanted to play because we created chances. I was a bit worried when they got it back to 3-1 but we saw the game out well.

Overall it was a good win under real pressure to get three points. After last week’s debacle we’ve responded well in Europe and now in the league, and it does get things somewhat back on track. However, let’s not kid ourselves that two wins makes everything right and rosy in the garden.

We’ve played two pretty average sides and done just what you would expect Arsenal team to do. It’s great to see and much more fun to watch than the alternative, but it doesn’t alter the fact that we still have issues in terms of the strength of our squad and of our first team. We can, and should, improve on that during this week.

Arsene Wenger said there’d be no movement before the Fenerbahce game on Tuesday. Quite why that is I’m not sure. I know it’s not possible to play anybody new on Tuesday but there’s no reason why we can’t start doing the business required early in the week. Obviously though, the North London derby next weekend is the deadline, more or less. There’s a full seven days between now and then, plenty of time to do what has to be done.

And make no mistake – it has to be done. We’ve navigated a difficult looking week very well and full credit to the players for that. They’ve repaid the manager’s faith in them, yet for me it makes the case for signings even more obvious. They are good players, who work hard and try their best for the team. Adding some quality and depth to them will only make them, and the team, better and would, in my opinion, make us credible title challengers if the purchases were good enough.

Of course that’s a drum I’ve been banging all summer and we’re now into the last few days of the transfer window, so all we can do is hope that all the talk we’ve heard from them becomes action and the players get the reinforcements they both need and deserve.