I have returned from a short sanative sojourn in Her Majesty’s Jamaica, a most refulgent island indeed. I had a most pleasant trip enhanced by the generous fiscal gift donated to me by a very charming Peruvian gentleman, for whom all I had to do was bring a hundredweight of his finest talcum powder through customs stowed in my wooden leg. Money for nothing!

Money for nothing, indeed. As we reach the swirling vortex of the transfer window, we seem to have only signed a) Mr. Joseph Sangley, The Bromley Beanpole, on a free transfer. Apparently there are some cobwebs up in the corners at Highbury House, or perhaps a number of lightbulbs which require changing. And b) The return of the utility player formerly known as Bosman Hefaktoff, AKA Mathieu Flamini, AKA Michael Flame.

Hardly a signing to quicken the pulse, as useful as he once was. Especially when seen in stark relief to Middlesex Rovers, who are currently rushing around the supermarkets of World Football like a Ritalin-addled housewife on a trolley dash. Certainly they have strengthened, but in ridding themselves of the macrotous Bale of Nazareth – surely only a bunch of bananas away from signing with Madrid Royals – have they lost their best hope of overhauling that massive one point gap between us and them? Only time will tell. I would remind the fretting faithful, however, that this is the club who once paid 15 million of your finest English pounds for David Bentley.

WE SIT ON OTTOMANS

And so to N5, where Ottoman Athletic turned up on Tuesday last to be efficiently despatched by a brace from our Senegalese mid-fielder Abdoulaye Ramsara, who is enjoying something of a purple patch. This of course means that for the sixteenth year in succession we reach the group stages of the universe’s premier club competition. Naysayers complain that this means very little, as we have such a poor chance of actually winning the buggering thing. To which I say, pin back your ears, odiferous dewberry, for I have something of import to tell you. “ONLY ONE CLUB CAN ACTUALLY WIN IT, WAGTAIL.”

As Mr. Winton says, you have to be in it to win it. And if we say the Arsenal Prayer enough, who knows, the requisite reinforcements may yet arrive to allow a proper tilt. And at this point, as is traditional, I would like to enquire precisely who Tottenham shall play in this year’s competition. We shall see on Sunday how the teams compare; I personally feel that we should enter the North London and Middlesex Derby with very little kakorrhaphiophobia. We shall triumph. 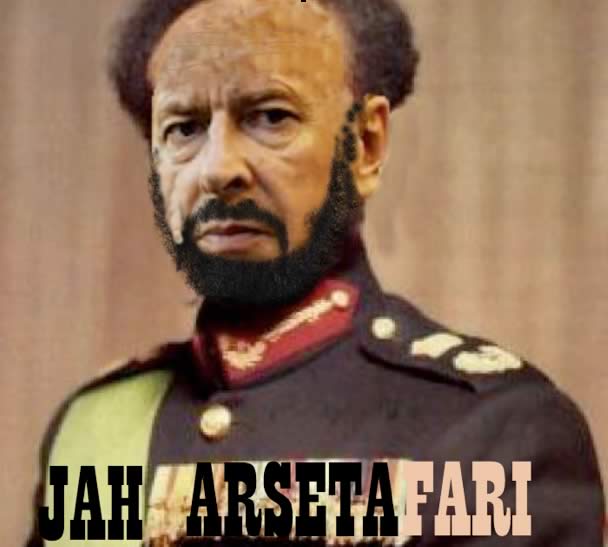 It was whilst one was pondering the frustrations of this most irritating of abstersive summers that one had something of a revelation, which may or may not have been due to the splendidly voluminous cigarette one was passed at a bashment in downtown Kingston Town. Unlike the followers of FC Chelsea 2003, or the Abu Dhabi Vulgarians, who flit betwixt dark and light blue depending on the wind direction, we have no choice. We have picked, or had picked for us this wonderful club, much like a religion. I therefore propose adherence to a way of life we shall call ARSETAFARIANISM.

Arsetafarianism is more a way of life than a religion.

Haile Wengassie is blamed for this perceived frugality, but the blame for the misuse, or rather unuse, of Arstefarianism’s vast funds lays at the door of the shadowy figure of Prince Gazidis of Johannesburg, who became a High Priest in 2008, is largely viewed as a heretic by the grassroots Arsetafarians, who would very much like to subject him to the very worst that the Grahamish Inquisition can offer; the rack, perhaps, or at least the comfy chair.

The Trinity of Arsetafarianism is generally believed to be The Father, Herberti Chapmanvey, The Son, Prince Dennis, and the Holy Ghost, Prince Terry of Henry.

Key prophetic verses are Zephaniah 3:10 “From beyond the rivers of Madrid My worshipers shall bring Gonzalo Higuain, Fellaini, Bernard, Jovetic, Cesc, Suarez, Cesar or Rooney.” At the time of writing it is unclear whether this prophecy has come true, and indeed this inspired The Arsenal Summer 2013 Prayer.

Another key figure is The Holy Fool, sometimes known as Dick Law. This tricky, transient, laughable jester has somehow climbed the ranks within the High Church of Arsetafarianism, despite having no known skills or attributes. He is often seen in conclave asking for clarification on which appendage is his arse and which is his elbow, and waffles incoherently about preparing bids for cups of tea and so on.

A series of violent, dirty tackles perpetrated on an Arsenal player in rotation, to avoid any one player being shown the mustard for persistent fouling. Tactics have been used so far this season by Paul Lambert’s Aston Villa and Ersun Yanal’s Ottoman Athletic; as in, “Alves, Meireles, and now Gonul … These mountebanks are really dining at the Kaiser’s Buffet here. I hope the Undertaker’s Assistant spots it soon.”