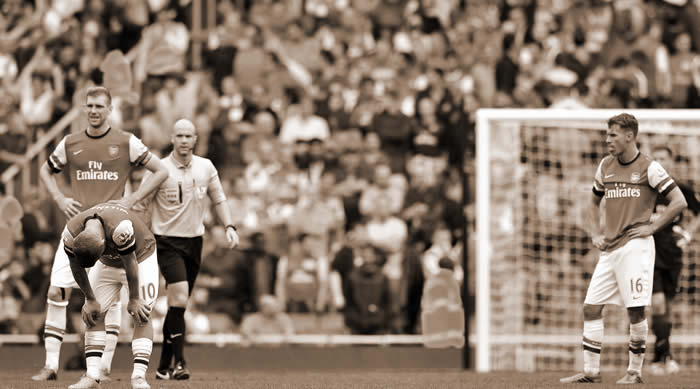 It’s hard to know where to start this morning. Pretty much anything that could go wrong did. We lost the game, lost players from our threadbare squad to injury, suffered some extremely dodgy refereeing decisions, and by the end there was little else but anger and disenchantment. Some start to a season.

Let’s get the referee out of the way first. I thought he was appalling from the first minute. Even leaving aside the big decisions, it was the little ones that set the tone. Every Arsenal challenge seemed to be a foul, yet Villa were allowed to do what they wanted. Villa were given advantage on a number of occasions (the first goal the most notable), yet Arsenal were pulled back and play stopped.

That the loudest cheers of the day were when he deigned to give us the odd free kick says it all. As for the penalties, well, I don’t think we can complain too much about the first one, even if the advantage thing was a bit odd. The second looked like a good Koscielny tackle but it’s always a risk when you go sliding in on a player in the box, especially when you know the ref is trigger happy.

The second yellow for the Frenchman looked ludicrous to me, especially when one Villa player had been allowed make three or four fouls without a card (Howton, Lowton, something?), and moments later Ron Vlaar, on a yellow from the first half, was let away with a much more obvious and cynical foul without a second yellow.

However, it might also be true to say that he could easily have shown Szczesny a red for the first penalty, and while I will not argue with anyone who says the referee had a big influence on proceedings, and was utterly shit, I’m not going to lay the finger of blame on him. To me he’s a handy scapegoat for those who want to ignore our own failings and our own hand in this defeat.

It was a result borne out of a pathetic summer of inaction, dithering and mismanagement at footballing and board level. Arsene Wenger said afterwards that we didn’t lose the game because of lack of new players, suggesting that the players we had were capable of winning it. I agree that we were capable, on paper, of winning. I said as much yesterday in my blog.

But, to say having gone through the entire close season with no investment in the team had no bearing on the result is wrong. Simply put – having better players would make us a better team. A better team could have built on Giroud’s fine early goal. A better team would not have allowed Agbonlahor to waltz through our midfield leading to the first penalty. With better players you have a better chance of controlling the game, thus situations which bring about danger (and bad refereeing decisions) are less likely to happen.

Imagine an Arsenal team with Luiz Gustavo and Gonzalo Higuain available yesterday. Better. More solid, more attacking threat. Imagine an Arsenal team with Begovic in goal. I like Szczesny (perhaps more for his personality than his goalkeeping as it turns out), but seeing him go full Almunia, miles outside his box, heading and making a last ditch tackle while on a yellow card already, was not good.

And in a summer when it’s hard to make any sense of what the manager has done off the pitch, how do we make sense of what he does on it. Why, when Oxlade-Chamberlain had to go off at half-time, did he put on Santi Cazorla? He’s had little or no pre-season, he’s just back from Ecuador and his performance was that of a man who was simply not ready. All the while, a fully fit, well prepared Lukas Podolski sat on the bench until thrown on in the 93rd minute when Sagna went off.

We ended with Aaron Ramsey at centre-half. Think about that for a moment. Now think about next weekend against Fulham when we’re likely to be without the injured Gibbs, Monreal and Vermaelen and the suspended Koscielny. Maybe Sagna will be ok after his horrible looking fall, but if not Arsenal have two available defenders. Carl Jenkinson (who I was told they’re considering loaning out), and Per Mertesacker.

Going into a season with just two centre-halves isn’t so much ill-prepared as downright stupid. We know players get injured and suspended, yet we’ve done nothing about it. We knew our midfield was light, we’ve done nothing about it. We knew we needed somebody else up front, we’ve paid lip-service to it by bringing in Sanogo, walking away from Higuain and involving ourselves in the gigantic, embarrassing mess that is Luis Suarez and his imaginary release clause.

Yesterday was the direct result of the summer. Sure, you can’t legislate for a referee having a nightmare, but you can put yourself in a better position to be able to cope if that happens. At the end of the day, there’s no transfer official making decisions which stop us spending money. We have, deliberately, chosen not to spend any money this summer.

And when I say we, I mean Arsene Wenger. I realise there’s anger at the board and the owner (which I understand and they’re complicit in allowing this culture of inaction to exist), but when it comes right down to it one man and one man only decides what happens on the football side of things at Arsenal Football Club. It’s not Kroenke and it’s certainly not Gazidis.

If Arsene Wenger doesn’t have the right people around him, in terms of scouts, negotiators or other people who can get big transfer deals done, that’s down to Arsene Wenger, because he decides who those people are. He fills the vacancies, he puts the responsibility in their hands. I think it’s clear that whole side of the club is utterly dysfunctional. Capable of operating at a very basic level, but incompetent above that.

Nobody can do anything about this because these are Arsene Wenger’s people. He is the one who decides. And yesterday, at his post-game press conference, he hit out at the press for questioning why a club as cash rich as Arsenal didn’t spend. There was the usual stuff about being on the market and how he wants to buy players (which I find hard to believe any more), and then this stunner:

You got what you wanted, you should be happy. Before the start the season that was all you write in the papers so what do you expect?

Staggering, when you think about it. You can certainly make a case for some members of the press being caustic or wind-up merchants, but to suggest this is a self-fulfilling prophesy because of what they write, rather than what he has done, or not done, is bonkers.

At this point you can’t convince me that any business we end up doing is anything other than reactive. Oh shit, we’ve lost a game in a slapstick manner, bit of an injury crisis, better go buy some players. That’s no way to run a football club. We had the chance to be proactive. We make a complete and utter mess of it. And that mess was what we saw on the pitch yesterday.

Another point to consider: having witnessed that yesterday, and looking at a club and manager who are in turmoil after one game of a new season, how attractive a proposition is a move to Arsenal now? Which super quality player, better than the ones we have (of course), is going to look at us as the place to be with all this going on? Compared to the summer when it would have been seen as a signal of intent and ambition, it’s now the polar opposite. What a mess.

I’ve been running this site a long time, I get a lot of email, and in recent weeks I’ve noticed that many people are so fed up with the way things are at the club that they’re considering jacking it in, for want a better phrase. They just can’t stand it any more. You can say that speaks more to them than anything else, but it’s unprecedented in my time doing this blog. They’ve reached breaking point but agree or not, all of us who love our football club know how far you have to be pushed to make that kind of decision.

As the third goal went in yesterday, a chant erupted around the stadium – “Spend some fucking money.”

Who could argue with that sentiment? What’s gone on since the end of last season has been little short of a disaster and highlighted the deep flaws and problems that exist within the club. Yet, it raises a bigger question now: do you believe Arsene Wenger is the right man to spend that money at this point?

I love the man, he’s given the me the most enjoyable era of my Arsenal supporting life, the best football, the best players, he’s done so much for us, so it’s sad to see him struggle like this. But it’s also difficult to listen to him, to blame the press when he’s the one who decided this squad was good enough to start the season, and go public about how it was good enough to win the title.

The stark reality is that it wasn’t good enough to beat Aston Villa at home on the opening day of the season. Right now, it feels like end of days territory, and perhaps we’d be better off knocking things down and building them up again than trying to plaster over the cracks.