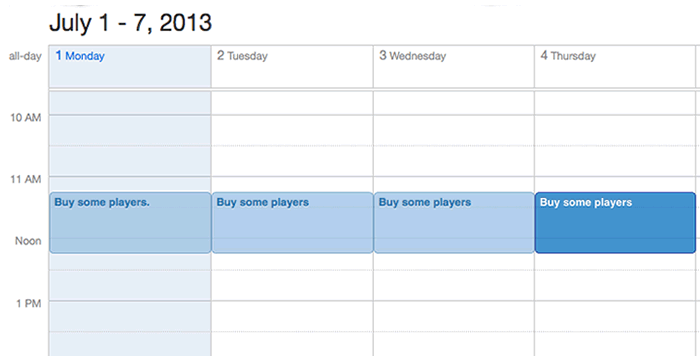 Hello and welcome to July.

The Confederations Crap is over, which means that Santi Cazorla and Nacho Monreal can get some holidays. With the first of the players back in pre-season training next Monday, and the team due to go to the far east on the 11th (I believe), it’s unlikely that either of them will make the tour.

Santi in particular could do with putting his feet up for a few weeks. Having played in every Premier League game last season – which is quite something for a guy coming from a different, and less physically intense league – it’s important that we get his batteries recharged ahead of the new campaign.

One would also hope that now that we’re in July, with the transfer window ‘officially’ open, the fact that pre-season training is looming might add some urgency to proceedings when it comes to bringing new players into the club. While it’s good to get your business done early, there’s some common sense in not doing it too quickly. If you’re looking to sign players who are going to earn £100,000+ a week, doing deals as soon as the season ends can cost you a big chunk of money.

I know some will say we shouldn’t be penny-pinching, and I get that when it comes to fees and the wages we offer new players, but is there any point in paying somebody to do nothing? Haven’t we grown fed up of that with the likes of Squillaci, Arshavin, Chamakh et al? If it was a case that had missed out on a big target for the sake of a couple of weeks wages, then there’s room for criticism, but that hasn’t been the case.

So far the market has been pretty quiet, but I suspect things will start ticking over the next few days and as this month goes on. From our point of view there’s not much new. According to Marca, everything is agreed with Gonzalo Higuain, and it’s now down to the two clubs to reach an agreement over a fee. The player is away on holidays at the moment but not so far away that he can’t be in London quickly enough if required.

Meanwhile, the Guardian say we’re going to go for QPR goalkeeper Julio Cesar now that the Confederations Cup has finished. They want to get rid, we want an experienced goalkeeper and from that point of view it ticks a lot of boxes. It’ll be an interesting one though, if we do make a move it means that one of the Poles will almost certainly leave the club, and it’s likely to be Lukasz Fabianski.

He’s expressed his desire to leave and play regularly more than once over the last couple of years. Having lost his place to Wojciech Szczesny, a couple of quite serious injuries is what’s stopped him following through on that. With only a year left on his contract, Arsenal can recoup some money for him because there’s no way he’ll extend his deal if we sign a player like Cesar.

But with Vito Mannone on his way to Sunderland, it would leave a bit of a gap in the squad. Last season we needed Mannone, who was third choice, to play 13 times because of injury to Szczesny and Fabianski. If a similar situation were to occur with Woj and Cesar, for example, who do we turn to then? Damien Martinez is next in the pecking order but you’d have to be very optimistic to think he’d be ready for football at this level, so it does raise a few questions. We shall see, I guess.

So, a fairly slow start to the week, but hopefully the pace will pick up as we go along. Remember, any breaking news can be found over on Arseblog News (follow on Twitter for instant updates), analysis and comment here every day.