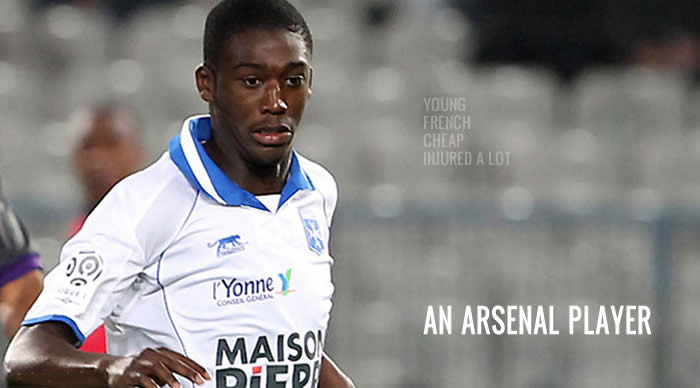 It happened! It finally happened!

We made a signing. Sure, it might not have been the ‘world class’ £20m+ star everyone was hoping for, but it’s something. And after so long waiting for anything to happen we should embrace it.

Yaya Sanogo is officially an Arsenal player. Not that it’s any surprise, the announcement was inevitable, and we were simply waiting for his contract with Auxerre to expire on June 30th. Arsene Wenger says about the player:

Sanogo is a good young signing for us. He has shown that he has potential with his recent performances for Auxerre and also for the France Under-20 side. We are looking forward to Yaya joining us and continuing his promising development.

Of course it’s easy for those who like to make easy jokes to point to the fact that he’s young, French, cheap and, hilariously – because nobody ever makes this reference – the proud possessor of an injury record that would put Johnny Fractures to shame. And hey, I get it. We’re sitting on a pile of cash and this is the first guy through the door, but for me this is a player who will join to add some depth to the squad.

He’s not the signing who will make a statement, who will fire us to trophies, and guarantee goals. We know we’re after a player like that. Sanogo is someone who can replace Chamakh and Park in the squad, a Carling Cup option to begin with, and the reality is we don’t have a young striker coming up through the ranks who’s ready for that at the moment. As such I’ve got no issue with his youth, his nationality, his price tag and hopefully he’s left his injury woes behind him.

Those who know French football better than I speak of his talent which has, in fairness, been hampered by the problems he’s had. He’s not coming in on massive money, he’s a small Arsene-esque gamble which may or may not prove fruitful, but we can’t complain about squad depth on one hand and then also complain when we do something about it. How about seeing this as something positive and reserving judgement until we’ve actually seen the guy play for us?

Revolutionary, I know, but it’s worth bearing in mind. I don’t think he’ll be the only striker arriving this summer anyway. If he is, then I will join the ‘Go absolutely mental’ brigade when the window closes, because we certainly need a player of the calibre of Higuain, for example, but for now I’m happy enough that we’ve added something to the squad and hopefully he’ll make a positive contribution. Let’s face it, he can’t be worse than Chamakh or Park. I know the bar is pretty low there, but it’s true.

And it does seem as if things are beginning to happen. Yesterday, the German press reported that Bayer Leverkeusen had turned down a bid in the region of €23m for their midfielder Lars Bender. Apparently it’s the second bid we’ve made for the player so it remains to be seen how much we want him. Can we tempt them with more money? Is €23m as far as we’ll go for him?

Leverkeusen don’t want to sell, having lost Andre Schurrle to Chelsea and given what they earned from that deal aren’t exactly strapped for cash, so we’ll have to wait and see, but it’s a sign that a defensively minded midfielder is on the shopping list this summer. As I mentioned last week I’m very dubious about the links to Fellaini, if the release clause were met something would have happened by now, and it looks as if we’ve got our sights turned elsewhere. What happens next remains to be seen, but there’s stuff happening and hopefully we can get things sorted as quickly as possible.

Meanwhile, as Jack Wilshere says he’s encouraged by the targets we’ve been linked with, another outward deal has taken place. Johan Djourou has joined Hamburg on loan, and the German side have an option to buy at the end of the season. Speaking to the official Hamburg site, the Swiss said that he just wanted to play, although he could have stayed at Arsenal and earned more money:

In London I could have earned considerably more money, but that wasn’t the decisive factor. I want to play as much as possible and to improve, and this is why I can see the ideal conditions for myself in Hamburg.

A refreshing attitude when you consider we’ve very recently had players on big contracts who have flat-out refused to go somewhere else to play football, content to do a bit of training and pick up their wages. Which isn’t to say they’re wrong to do it, it’s an issue that the club have to take some responsibility for also, but it’s good to see Djourou prioritise football over money and he deserves credit for that. Maybe that’s what you’re supposed to do, but we know fine well that too many don’t.

It’s a shame the way things went for him at Arsenal. He seemed a decent, likable guy and this Guardian piece from 2011 highlights how he had become a very important player for us for a period. Yet injury, loss of form, the emergence of others and, ultimately, the loss of faith in him by the manager meant he went too far down a road it’s almost impossible to come back from. Yet in a football world full of people it’s impossible to care for, Djourou came across as one of the good guys and I hope he does well out in Germany.

Right, that was a busy enough day yesterday, let’s hope for more today, but it’s a good start to the month. Till tomorrow.

Petr Cech is the new Johan Djourou + a 5 point plan