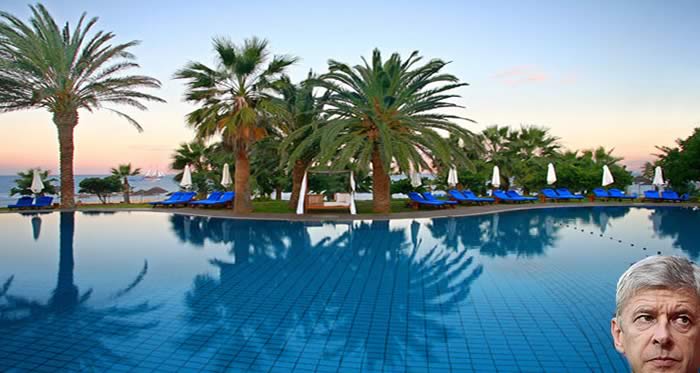 Arsenal left Vietnam last night having dispensed another seven goal spanking in the friendly game against the national side.

A first half hat-trick from Olivier Giroud saw us go in 3-0 up at the break. In the second half Chuba Akpom scored twice, while Alex Oxlade-Chamberlain and Ignasi Miquel got the other goals. Late on Vietnam scored a rather flukey goal themselves and everyone went suitably mental, before their keeper got sent off for a handball 10 yards outside his area which saw one of their lads grab the gloves and go in goal, just like schoolyard football.

Like the match against Indonesia the quality of the opposition wasn’t really the thing to focus on, nor the scoreline for that matter. The game was played in 30C heat, and we did look a bit leggy at times, but it’s all about building fitness and match sharpness and the teams will get better and more testing as pre-season progresses.

We’re now in Japan for two games before flying back to London. First up it’s Nagoya Grampus (Wenger’s old club) on Monday, before Urawa Reds (try saying that really quickly) next Friday. According to the Mirror, there’s much more focus on training and conditioning in Japan, and not so much on the commercial side of things with fewer events and sideshows, but we’re still more than a week away from home.

I know last week I expressed some concern that our jaunt to the far-east, with everyone on the trip and seemingly nobody back home looking after the other stuff we have to do this summer, might impact on our potential transfer business, and some quotes from Arsene Wenger don’t really put my mind at ease, I have to say.

He admitted some interest in Wayne Rooney, referencing the sale of last summer:

It happened to us, it can happen to them. We have not the problem of the wages of Wayne Rooney, but it’s very difficult for us to talk about a specific case

But also seemed to suggest there was a lack of choice in the market:

The competition in Europe is very hard at the moment. There’s a lot of money and not many players.

Before trotting out the line that made me uneasy, saying:

We work hard but we are not close to signing anybody.

There are those will say ‘Oh, don’t look at what he says, read between the lines’, but the truth is that when he uses that line he means it, more often than not. I could be completely wrong, and we could announce a new player the moment I finish this blog, but if you were to ask me what I really felt, I’d say that he’s right. We’re not close to signing anybody. Anybody at all.

As I mentioned yesterday there’s a lot of focus on which unpalatable striker we might buy with now public interest in Rooney and Suarez, but it’s hard to reconcile the manager’s comments about there being ‘not many players’ when, if we really wanted to, I’m sure we could have done a deal for Higuain now. You’re not trying to deal with anyone else’s problem case, you just get a top player who will work hard and fit into our team very well. As it stands, Napoli are after him now, and if you were him, having reportedly agreed everything with Arsenal only to see them put you on hold to go after a bitey racist and a freckly fat bloke, what would you do?

It’s also worth pointing out again that it’s not as if the purchase of one expensive striker is as much as we need to do this summer. We’ve got a serious shortage of centre-halves, there’s still an issue over the goalkeeping position, if we were bidding for Lars Bender it shows there’s a desire to add a strong midfielder, while adding something a bit different/creative to midfield/the wings wouldn’t go amiss either.

Yes, I realise there’s plenty of calendar time to get deals done, but you’re talking about deals which mean guys have to uproot, find a new home, perhaps move to a new country, learn a new language, meet new teammates and settle in personally and professionally. We know relationships take time to build on the pitch, and that takes time on the training ground as much as anything else.

The talk of getting our deals done early seems little more than a soundbite at this point. I worry that we’re wrapped up in deals which appear unnecessarily difficult and not the best use of our time and resources. I can’t see United selling Rooney to us (or him coming to us for that matter), and the fact that Suarez is banned for the first 6 games of the season means that Liverpool are in no rush to let him go and can drag this out as long as they want. Right to the end of the window if that’s what they feel like.

And who knows, maybe they’ll just make him stay. Make it impossible for him to leave, he has a contract after all, and they might well feel like after everything that’s gone down, they’re in no mood to do him any favours and let him leave just because that’s what he wants.

Of course, I could be worrying needlessly, everything could be in hand, approaches are being made, deals being thrashed out, contracts drawn up from our training camp. Ol’ Dick has got it in hand. But it just doesn’t feel like it right now.

I don’t doubt that we’ll make signings this summer, my worry and my concern is that it was all set up for us to be able to do our business in a much more efficient and much less dramatic way. There is no saga to contend with. It’s not a case of ‘Oh, once we sort out where we’re going to sell X to and for how much, then we’ll be able to to focus on the players coming in.’

Yet here we are, slap bang in the middle of drama involving Suarez, hanging onto the coat-tails of the Rooney stuff and the manager is saying, quite truthfully in my opinion, that we’re not close to signing anyone. If you’ve been following this club, and the way we do business for any length of time, and you’re not even slightly concerned at this point: can I please have some of what you’re on?