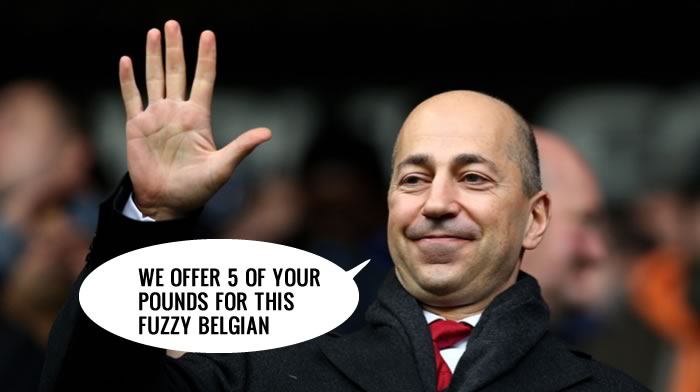 Lots of interesting stuff yesterday from Ivan Gazidis who met with some members of the press, most of whom are on the Arsenal beat throughout the season.

It’s worth putting this into some context. On Monday Gazidis will meet with fans groups, like the AST and AISA, for a now annual Q&A session. While you have to take your hat off to him for doing it, questions are vetted beforehand and it is little more than an exercise in PR and spin.

The timing of yesterday’s stuff isn’t coincidental at all. It sets the agenda nicely for Monday, with a focus on our financial strength, what we can do in the transfer market this summer, and the future of the manager who, it seems, is likely to be offered a new deal.

Personally, I have to admit some reservations over that, simply because I feel we need to see more from the manager before that happens. He did amazingly well to get us to 4th place this season, but the happiness at getting there shouldn’t obscure the fact it was a monumental struggle wrapped in two horrendous, embarrassing cup exits. An end of season flourish was perfectly timed, and very, very welcome, but nobody will remember 2012-13 for anything other than seeing off Sp*rs at the end. And as amusing as that is we ought to be about more than that.

Last month he spoke about the possibility of staying beyond 2014 and said:

I want to stay if I do well and if I consider or the club consider that I do well, that is all.

Not unreasonable, to my mind, but I don’t think we’ve got enough distance between last season to say he’s doing well. Which might sound a little churlish or something but nothing’s proved yet. You have to think that if a new deal is imminent it’s because the club want to present a facade of solidity and consistency, something Gazidis touched on when he spoke about what we’re going to do this summer:

I think players that are concerned about uncertainty probably think about Arsenal as the most certain place they could be in the world of football. This is a club that has had remarkable consistency in terms of its manager, its football philosophy, its direction … so if its consistency players are looking for, I think Arsenal would be a very attractive place to come.

I’m not convinced that players are as hung up on ‘consistency’ as he says. Arsenal have been, in the last few years, a team that is consistently unable to challenge for the title, which is hardly an attractive feature, so I think there’s a touch of spin here. However, if players we’re interested in would feel more inclined to come to work for a manager for more than one season then it does make some sense.

And in terms of what we can do in the market, Gazidis was very quick to point out our new financial strength and what’s available to the manager. Asked if we could spend £25m on a player and pay him £200,000 a week, he said:

Of course we could do that. We could do more than that. We have a certain amount which we’ve held in reserve. We also have new revenue streams coming on board and all of these things mean we can do some things which would excite you.

And on the need to do better, having just scraped into 4th:

The critical thing about that is to work out how we don’t have to go through all of that again and we can go through next season and put ourselves in a position where we are really competing for major trophies towards the end of the season. And that is going to require forward progression. I think everybody realises that. There has been a long-term plan in place at this club. You are probably all sick of hearing me talk about it.

We should be able to compete at a level like a club such as Bayern Munich. I’m not saying we are there by any means, we have a way to go before we can put ourselves on that level. But this whole journey over the past ten years really has been with that goal in mind which is why I say that this is an extraordinarily ambitious club. We get beaten up along the way but I think we are an extraordinarily ambitious club. This has been about putting us up with the best in the world and now the question is turning that platform now into on-field success.

Some big words in there, but as with anything there are two ways of looking at it. There are many who feel like this is the Chief Executive who cried wolf. We’ve heard this kind of talk before; about how ambitious we are, about how we want trophies, about how we’ve got money to spend, about how they trust Arsene to spend it and improve the squad. Those words have been left hollow and skepticism is completely understandable.

We have heard it before, we have subsequently failed to challenge for trophies, money has been left unspent, the team has struggled, the quality of the football has declined, and there’s the whole ‘Fool me once’ thing going on. I get that completely, although the outpouring of personal vitriol is, to my mind, unnecessary. Actions speak louder than words and when you look back at similar statements in the past couple of summers it’s very hard to marry the two from an Arsenal point of view.

So, I completely understand why there might be a negative reaction from some quarters over this. They want to see things happen, not a very polished and accomplished speaker talk about how we have the capability to make things happen. Yet for me, and perhaps it’s because I’m hopeful and optimistic, there’s something a bit different about it this time. We know Arsenal have been traditionally guarded in terms of transfers on every level, including what we have to spend, so for the Chief Executive to publicly state we could smash our transfer record, pay double the highest current wage at the club, and do more than that if we wanted to, is, to my mind at least, very much a case of putting the ball in the manager’s court.

If there’s been confusion down the last couple of years about whether it’s money we haven’t spent or we haven’t spent because we don’t have the money, that’s well and truly clarified now. He’s spoken about his ambition, about Kroenke’s ambition, and put it up to the manager to use the funds available. If we don’t, it gives perfect clarity to the reason why.

As well as that, there’s no escaping the financial landscape has changed. £30m+ a season more from Emirates, a new kit deal in the offing which will bring in something similar, money in the bank already. If, perhaps, there was a reluctance to use the cash in case we finished outside the top four, for example, that’s no longer an issue. We can spend with more security, knowing the club is on a solid financial platform for the foreseeable future.

The key question is whether Arsene’s modus operandi will change with it. While I don’t think you’ll ever stop him trying to unearth the gems and hidden talents, there’s the very real capability of going out and buying established talent at a level beyond what we’re used to. Those who say he never spent big forget £10m for Henry, £13m for Wiltord over 10 years ago (and that remains close to our record fee), £15m on Reyes etc.

Despite my reservations above regarding a new deal, I’d like to see Arsene have a real go this summer having guided the club through very challenging times. While criticism of how we failed to use what we had is certainly valid, you can’t overlook the impact of the new stadium and the restrictions it placed on us. He tried to build a team of youngsters to cope, ultimately it didn’t work from the point of view of winning trophies, but I don’t know that there’s any other manager who could have kept his team in the top four under those circumstances.

With talk of a record bid for Fellaini, for example, (again the timing of that info is notable), there’s no escaping the fact we can step it up a level this summer. Ivan says we can do it, we have the funds, the resources, the infrastructure, and everything else, to push the club forward significantly.

But we come back to the bit where people have reservations. It’s one thing saying it, it’s another thing entirely to do it. We’ve had enough talk, and whether it enrages you or excites you, now is the time for action.

The full transcript of the Gazidis interview can be read here.