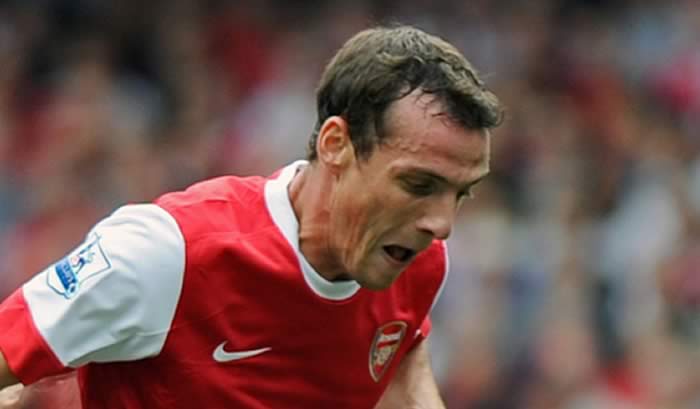 Yesterday the club announced that three players would be packing their jewel encrusted suitcases, laden with bullion and rubies and precious scents from the finest perfumiers, and heading off into the distance. I did imagine them as the kind of little chaps that run away from home, their scant belongings in a spotted handkerchief tied to pole thrown over their shoulders with a trusted old dog scuffing along with them, but it doesn’t really work.

Sebastien Squillaci, Andrei Arshavin and Denilson are no more. At least from an Arsenal point of view. To be fair, Squillaci and Arshavin have done a fantastic job of turning invisible, cropping up now and again in the training photos, never to set to foot upon the pitch wearing Arsenal garments. Denilson, at least, has gone off and played football when he’s not suspended for getting sent off all the time or calling fans names on Twitter.

One of the main criticisms of Arsene Wenger over the last few years was his reluctance to buy experience and/or quality. When Squillaci arrived from Sevilla in the summer of 2010, he looked to be a decent signing. He ticked the boxes of experience and reasonable quality. He was 29, a French international, he’d played for Monaco, Lyon (winning the French title there), and Sevilla (Copa del Rey and reaching the UEFA Cup final), and with new signing Laurent Koscielny needing an experience head around it looked to be a decent move.

I don’t know if there was an exact moment when the confidence drained from him. I suspect it was a drip-drip affair, but the Squiscielny partnership didn’t work. In fairness, some of that was down to the newer of the pair making a huge step-up and being a bit error prone but he was full-hearted, quick and easier to forgive. The truth is Squillaci never managed to forge a good partnership with any of the centre-halves.

Squimaelen wasn’t up to much, Djourlacci was poor and Squirtersacker, well, the less said the better. This was a guy who went from playing regularly, and consistently, for clubs at a decent level, to being so beyond repair that he played just 9 minutes of Premier League football in the past 2 seasons. A waste of money? Sure. In hindsight it’s impossible to argue with that, but it’s impossible not to think there was a touch of ill-fortune and bad timing in there, on both parts.

People may complain about his wages, and there’s no way you can say we got value for money based on what he did on the pitch, but I don’t think he was paid above and beyond the level you’d expect for a player at a club like Arsenal. The difficulty was that his stock fell so low that the only clubs interested in him couldn’t possibly match what we were paying. He went from being a solid, mid-level pro, to a guy that newly only promoted Ligue 1 teams would have taken a punt on. And their budgets precluded any deal being done.

Similarly with Arshavin, he arrived a big name, a star on the world stage, and somebody with real and obvious talent. He shone, all too briefly. He leaves a caricature, a giddy pudding whose lack of conditioning and effort meant that talent was wasted. He lost the trust of the manager, his final appearance in an Arsenal shirt was an abject, pitiful display at Stamford Bridge, where he bumbled around the pitch like an ex-pro at a charity match.

There were good times, let’s not forget those. The 4-4 at Anfield, that winner against Barcelona, some of the goals he scored were stunning, but over time his desire waned, the work-rate (which was never great to begin with) became a liability, and all he’s got left now are offers from China and the middle-east. This was a guy who said he’d love to play for Barcelona. They’d have Hlebbed him out of town in no time, because talent is just a small part of the game. If you’re not willing to work hard then you’ll never fulfill it.

I know some put the blame on Arsene Wenger for not playing him in his correct position, but frankly that’s ludicrous. We’ve had this discussion before and Arshavin has nobody to blame but himself. He arrived, everyone loved him, he had such goodwill from the Arsenal fans, but ultimately it was he who made a bags of his football career. If there’s a place beyond the doldrums that’s where he is right now.

As for Denilson, we touched on him the other day, so there’s no need to go over it again, but what these departures mean is an estimated £150,000 per week saving from our wage bill. That’s around £8m per year. That allows us to use those resources better. Which isn’t to say that potential new signings won’t be a drain at some point, that’s the risk you take with any new player; however, we’ve long spoken about the need to use what we have in a more efficient way and this is a good start.

This trio represents the easiest part of the streamlining we need to do this summer. Arshavin and Squillaci were out of contract, while Denilson’s desire to sort out his future once and for all enabled us to come to an agreement with him about the rest of his deal. There are other, more difficult situations to sort out.

Chamakh will know he’s got another year of big Bosman wages at Arsenal and won’t be inclined to go anywhere unless he gets most of that in a pay-off. Nicklas Bendtner’s ego means he’ll probably refuse to go to clubs he feels are beneath him, and although there are links suggesting we’ll let Andre Santos go back to Turkey for as little as £1m (representing a £5m loss in the transfer market), I suspect it might not be an easy one to push through.

Still, we’ve made a decent start at making space in the squad, let’s hope it continues and that replacements are found to make us better again.