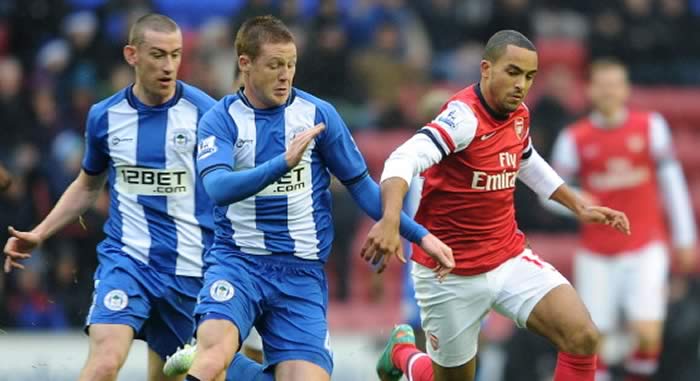 It seems like an age since played our last game. Then, thinking back to that very fixture, it seemed like it took an age in itself. Walcott’s early goal against QPR was followed by a goalless 89 minutes, plus stoppage time, and despite the relegated team’s relative ineffectiveness, just one moment could have changed the whole outlook of our season.

In the meantime, Chelsea and Sp*rs played each other and dropped points that mattered while picking up the full complement in their other games. At this point of the season we should be glad it’s in our hands. Despite how precarious it is, it’s still a position of strength and after 10 days off we should be fully recharged for this one.

Wigan arrive on a high, having won the FA Cup, but it will have cost them physically and mentally. It must have been odd for them to win the cup and not be able to celebrate it properly, knowing their final two league games of the season were still to come (another reason why the cup final should remain the final game of the domestic season), and I do wonder if it will all feel a bit anticlimactic this evening. Will cup success, and rightful satisfaction at that, dampen their motivation?

Consciously, I doubt it; subconsciously, you never know. Their task is as clear as ours. Win the final two games and they’ll achieve what they need to. There’s a kind of weird parallel between the two teams and the situations we’re in. They’ve pulled rabbits out of the hat in the final weeks of seasons past in order to avoid the drop, we’ve done likewise to finish in the top four. Never more so than last season when we endured that torturous 3-2 win over West Brom which saw us finish third and Sp*rs fourth. Our neighbours then had to watch the disgusting sight of Chelsea winning the Champions League knowing their place in the competition was then gone.

This time around it’s a straight scrap between us, them and the other them. A win tonight will lift us above Sp*rs into 4th place. A win on the final day could see us finish 3rd if Chelsea lose to Everton, but regardless of that result we’ll stay in 4th if we beat Newcastle no matter what else goes on around us. Arsene Wenger says of this evening’s game:

Both teams have to go for it, so it is difficult to know what will happen. It should be an open game. Two months ago our destiny was not in our hands. Today it is so we have done very well, so now let’s finish the job and continue to play like we have done and take the points.

With regard to the team, I suspect we might see a change up front. Lukas Podolski has struggled in his two games, and the manager’s attempt to explain why he’s been subbed so often are as clear as mud. I think he might go for Theo Walcott tonight and bring Gervinho or Oxlade-Chamberlain into the front three. Podolski could be an option from the bench should we need a goal in the latter stages of the game.

With the news that Jack Wilshere is to undergo minor surgery on his ankle at the end of the season, Tomas Rosicky should continue in midfield with Ramsey and Arteta, and the only other possible change is Gibbs for Monreal at left back. Lukasz Fabianski is fit again but Szczesny should continue in goal.

It’s likely that Wigan will try and replicate the system and performance which worked so well against Man City on Saturday. The difference, this time, is that they should be facing a team which is properly motivated and a manager who will be trying to win the game rather than not lose it. They had success down the flanks against City, particular on their right hand side, and traditionally that’s where we’re most vulnerable.

Santi Cazorla is, ostensibly, the left-sided part of the attacking trio, but because of the free role he has there are often gaps for the opposition to exploit. It means that the midfield need to provide cover when needed, Ramsey and Arteta need to be fully switched on for this one because McManaman will cause us problems if we don’t snuff out the danger early.

From our point of view, we can talk about bright starts but we got that against QPR then played like we were running through molasses for the rest of the game. We’ve lacked goals for a number of reasons. The lack of a real focal point in the absence of Giroud, the lack of width as wide players come inside for various reasons, and a lack of creativity exacerbated by a dearth of movement and options for anyone to find someone to pass to in the first place.

If Walcott is played down the middle it means whoever plays on the right can stay wide and give us some width. Wigan need to win so could leave space behind for Theo’s pace to exploit, and it’d be good to see a bit more decisiveness and responsibility taken in the final third. This is an area of the pitch where you can take a bit of a risk but we seem disinclined to do that in recent games. Let’s hope that changes.

We know what we need to do, three points or bust. I think this is likely to be another tight, nerve-wracking fixture, another potential banana skin to avoid, but we have to take hold of this game and use the physical advantage we’ll have after so many days off. It’s the final home game of the season, the crowd will be right up for it, the team need to be too.

If we find it hard going again, as we have done a number of our recent games, then I’d worry that this might be just one game too far, but, if we can click – and I know it’s been some time since that’s happened – then I’m confident we can take three points and make it a sad night for the visitors.

Fingers crossed, come on you reds.

Remember, if you’re stuck in work or out and about and can’t see the game, we’ll have full live blog coverage. Up to the second live text updates on your computer, tablet or mobile device. Check back later on for a post with all the info or bookmark the default live blog page.