They say that the league table never lies, yet it’s conceivable that Arsenal will end the season having scored more goals than the last and conceded less and still fall outside the top four places. As such, measuring progress can be difficult.

If it’s not improvement that Arsenal have made this season, then it’s certainly been a season of acclimatisation as a fairly new team gets to grips with playing with each other. Indeed, a comment made by Chelsea’s César Azpilicueta in an interview with the Guardian concurs in which he says that “a team is constructed with time and automatismos, habits, mechanisms” so as such, progress will occur gradually. That is surely the case with Arsenal.

You only have to look at Arsenal’s good run of form – which stretched to 9 games unbeaten following the 1-0 win over QPR on Saturday – to see what he means. Because it’s not been fluid attacking play – the hallmark of all good Wenger sides – which the run has been perpetuated by, but through resilience instead. There’s some that say that the extra focus on clean sheets has had an (adverse) effect on Arsenal going forward, and certainly there is some basis in that.

Yet Arsenal’s defensive approach is not so inherently dogmatic that it should affect their scoring in such a way. Indeed, what this just goes to confirm is what Azpilicueta said at the beginning: that it’s harder to coach synchronicity in attack than in defence because there are far more nuances.

Key to Arsenal’s upturn of results has been the availability of Tomas Rosicky. Similarly to last season, he has found fitness and form at a crucial time – playing an important part in the Gunner’s fine Premier League form and setting a fast tempo from his advanced midfield position. Against Manchester United the previous weekend, Rosicky was instantly effective, delivering the assist for Arsenal’s only goal. He was involved again straight away last weekend when, following a bad clearance from Armand Traore, he seized on the space behind and suddenly upped the tempo by spinning away from his marker. His cross found Aaron Ramsey who cushioned a header to Mikel Arteta and he fed Theo Walcott to score.

The majority of Rosicky’s passes are in the attacking third yet the graphic below shows the other – less glamorous – part of his game which highlights why he’s so important to the side. Because it’s Rosicky’s energy at the tip of the midfield which sets the tempo for Arsenal’s pressing game, and against both Manchester United and QPR, Rosicky recovered the ball 14 times – a figure which would put many a Premier League holding midfield to shame.

Rosicky’s know-how means he just about he pips Santi Cazorla to the playmaker role. It’s a sacrifice Arsene Wenger has had to make to bring balance to the side – a decision which hasn’t gone down too well with some, arguing it affects Arsenal’s potency. It’s true to a degree because Cazorla has been less effective from the left but I guess Wenger’s thinking ties in with what was said at the beginning; that having Rosicky in the side probably alleviates some of the vagaries of a new team might have. Besides, it’s not as if it has restricted Cazorla from roaming around the pitch and he often interchanges positions with Rosicky anyway. And at the very least, it in some ways lessens the reliance on Cazorla to create as there are more players in the line-up who can deliver the final pass.

Bacary Sagna’s position at the club will come under review at the end of the season. That’s unfortunate because he has been one of Arsenal’s best players for a long time. Yet, there is a belief that his powers are on the wane. Wenger seemed to indicate so after his mistake saw him haul down Robin van Persie in the 1-1 draw with Manchester United. “He has saved us so many times that unfortunately it happened (or rather, had to happen!) today,” the manager said.

One can feel a lot of sympathy for Sagna. Certainly his performances have been below-par recently and he has been culpable for a few of the goals Arsenal have conceded this season. But over the years, he’s created this image of dependability that often, Wenger entrusts him with a lot of responsibility – too much at times.

That usually means checking his runs, reining his naturally game to allow Theo Walcott to play with freedom. In that regards, Sagna hasn’t fully fulfilled his side of the bargain because he can tend to push up too hurriedly that it leaves Arsenal open at the back. But then again, he feels as if he must push up because he is very responsible for Arsenal’s passing game. Below, one can see how involved he is in Arsenal’s build-up play – considerably more so than Nacho Monreal (and the graphics are similar when Kieran Gibbs is playing). 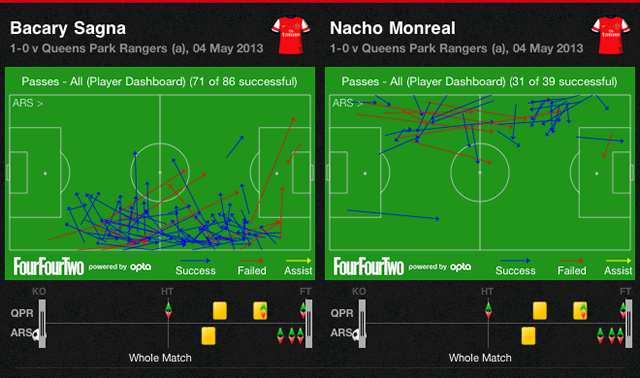 In that sense, Arsenal are lucky that not more teams expose their tendency to attack down the right-hand side (The Gunners average 37% of their attacks down that side). Perhaps it is because of Sagna’s ability to handle tight situations that not more teams are able to exploit them, especially because Per Mertesacker plays to the right and his first pass is usually to Sagna. Or that they’re more concerned with stopping the pass to the middle. But that only serves to highlight the importance of having a good passer on that side if teams try to stop Arsenal playing through the middle and Carl Jenkinson is not that player just yet.

It seems as if Sagna may still have a lot to offer.