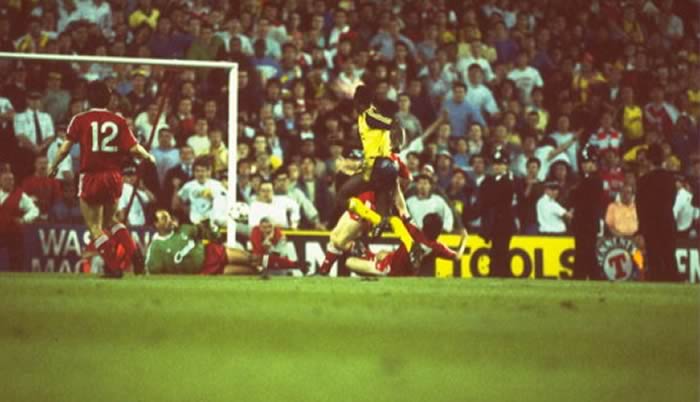 Happy Sunday to you.

I suppose I could write a bit about the Champions League final, seeing as there’s little or nothing going on from an Arsenal point of view. It was a pretty entertaining game, I have to say, ruined at the end by a goal set up by possibly the most objectionable footballer on earth.

And yes, I include John Terry in that. If Ribery played in the Premier League, most likely for Chelsea given his attitude and his face, I reckon he’d be one of the most hated players of all time. He should have been sent off last night for throwing an elbow at some Dortmund lad in the first half, and he makes Gareth Bale look angelic when it comes to diving [insert your own joke here about the Elephant man would look angelic in comparison to him].

Seeing him happy was, frankly, appalling. Maybe Bayern deserved it based on the performance in the second half, but it was still sad to see a Dortmund team, which will be broken up by Munich’s Millions, fall short on the night. The thing is though, as it’s not Arsenal, I give about *this much* of a shit really, and it’s not something that will bother me unduly (unless I see pictures of Ribery enjoying himself).

Other than that, kudos to the two goalkeepers who were both outstanding on the night. Neuer made some brilliant saves in the first half, as did Weidenfeller at the other end, and it was cruel on him, especially as the morally bankrupt, cheating gargoyle set up Robben for the winner. I guess it was a fitting end to a season of abject mingery, let’s hope the good guys get some next year.

As mentioned, there’s little in the news worth talking about. The Sunday transfer tittle-tattle is about as much fun as eating your own tongue so I’m not even going to bother.

It is the FA Women’s Cup final today in Doncaster, where Arsenal will take on Bristol Academy. Good luck to them and if you fancy an interview with goalkeeper Emma Byrne, then Tim Stillman did the necessary for Arseblog News.

Finally, as it’s May 26th, it would be remiss of me not to wish you all a Happy St Michael’s Day, and provide you with something visual to mark the occasion.