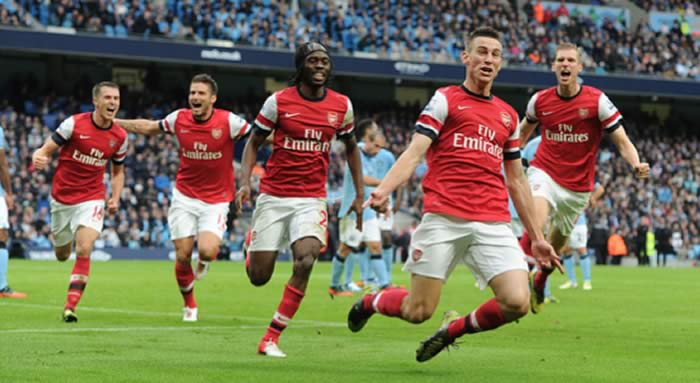 This time last year I spent a couple of days doing squad assessment posts, taking look at each player and giving them a grade.

We’ve been doing end of season ratings over on Arseblog News, but I thought, in order not to drag it out, we could Twitterfy the assessments this year and keep them below 140 characters each (mostly). Starting with:

Wojciech Szczeseny: Not outrageously bad but became a bit complacent, got dropped for Fabianski and came back more more focused. Can, and must, do better. C

Lukasz Fabianski: Came in from the cold after a year out injured, played well, got injured again. Gets a B on performances alone.

Vito Mannone: Had early season chances when Szczesny’s ankle was bollixed, did ok, but never enough to convince he’s got a long-term future. C-

Bacary Sagna: Struggled in what could be his final season with us. The impact of two broken legs hard to ignore. Loved that Sunderland display though C-.

Carl Jenkinson: Much improved, signed a new deal, now nearly as famous as his dad. C+.

Per Mertesacker: Solid, reliable, consistent, like an experienced pack mule. You try moving stuff up mountains without a mule. B+

Laurent Koscielny: Had some early season wobbles and was obviously hypnotised by Pulis when making the rugby tackle against Man City. Stormed back like a hero. B+

Thomas Vermaelen: It just never happened for the captain, his form was wayward, he gave away penalties and assists and found himself benched for the run-in. D

Johan Djourou: Played just twice before being shipped off to the Bundesliga to present a range of shows on ‘Die Shopping-Kanal’. N/G.

Kieran Gibbs: It’d fair to say he’s made progress this season. Still a bit brittle but left back looks healthy with the competition between him and Nacho. C+

Nacho Monreal: From Malaga to London in January. That is a change and a half but he coped well enough and hopefully we’ll see the best of him next season. C.

Mikel Arteta: His consistency is amazing, faded towards the end of the season, but relished the responsibility and was a crucial part of the team. B

Aaron Ramsey: Grew as the season progressed and played a very important role in our end of season run-in. Has a good platform to kick on for next season. C+

Jack Wilshere: Worries about his injuries still dominate. Hopefully the surgery will see him get through next season without problems so he can reach his potential. C

Alex Oxlade-Chamberlain: Suffered a bit from second-season syndrome but showed enough near the end to suggest he won’t be Terence Trent D’Arby. C-

Francis Coquelin: Arsene Wenger got his Coq out quite regularly in the first half of the season, but from January on we saw little of his thrusting runs or combative tackle. D

Tomas Rosicky: In cryogenic deep-freeze from August – February, made his now customary contribution to the run-in adding zip and energy to midfield. C+

Santi Cazorla: What a joy he is to watch, a brilliant signing who made a fantastic contribution. Player of the season for me. A.

Olivier Giroud: I think it’s been a decent season for the HFB. 17 goals, 11 assists. The issue was always that we had no back-up. Showed enough to suggest he can kick on next season. B

Lukas Podolski: Similarly Podolski’s stats are good, but it’s also easy to see why doubts exist about him and how he fits into the team in the long-term. B-

Theo Walcott: Finished top scorer, got a good load of assists too, and although still frustratingly uninvolved at times, had his best season by a long way. B+

Gervinho: Ended up with 7 goals and 5 assists but it’s the horror misses that people will remember. D-

Andrei Arshavin: Ultimately a massive disappointment, content to see out the final year of his contract. About as much use as an ashtray on a motorbike. F

So, there you go. If you want to have a look at the ones on Arseblog News, they’re here in parts 1 – defence, 2 – midfield and 3 – attack. Ratings are, of course, subjective and not meant to be definitive. Argue, debate, discuss, by all means, but don’t get your nose out of joint over them, life’s too short.

And speaking of life being too short, silly season is well and truly upon us with plenty of rumours flying about. I did enjoy the fella who declared that Arsenal had tabled a €30m bid for Stevan Jovetic, spent the next couple of hours re-tweeting the fact he was trending in certain regions, along with people’s tweets of praise, yet remained steadfastly silent when Fiorentina quite categorically denied they’d had any contact at all with Arsenal.

Given the expectation and, let’s face it, optimism (misplaced or not) that surrounds our summer business, I suspect there’ll be plenty more of this kind of stuff, as there’s nothing in this world that garners clicks and follows like an Arsenal transfer story. Worth bearing in mind, especially as we haven’t even reached June yet.