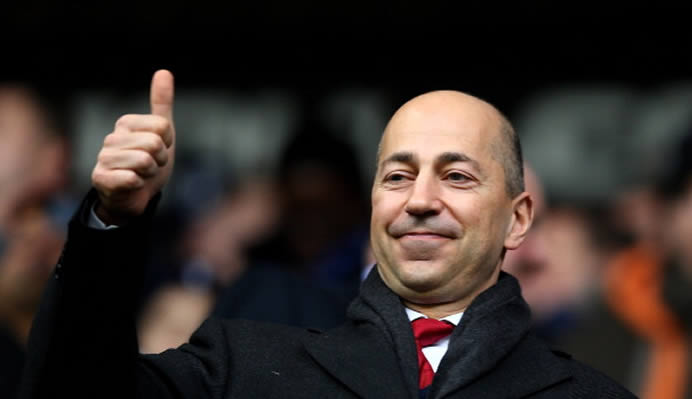 and the big news to kick us off comes from the Mirror and the story that our new kit deal is going to be with Puma. I heard about this last week, did some checking but couldn’t verify it, so left it be, but was told the money on offer was massive.

And that seems to be the case with a reported £30m per season plus bonuses which catapults the club to a new level financially. It kicks in when the Nike deal expires in 2014 but I’ve heard there might be an up front payment as part of the negotiation which could be available to us in the summer.

There were, of course, lots of people convinced it was going to be Adidas. They seemed the obvious candidate if we failed to renegotiate with Nike, with whom we’ve been associated for a long time and locked in since they gave us a chunk of money to help build the stadium, but that’s not the case and Puma seems to be something out of left-field.

You can see a list of the teams they already sponsor here, and Borussia Dortmund aside, I think it’s fair to say Arsenal would be their most high profile club deal. There are lots of player deals too. Olivier Giroud, for example, and a certain former captain is one of their blue chip clients – and that’s something that’s bound to set the transfer conspiracy theorists tails wagging.

It’s interesting to read and hear about people complaining about the deal from a fashion point of view. Frankly, who cares? The shirt will be red, the sleeves will be white, and while I don’t want to tempt fate, there’s little chance that they’ll get near some of the abominations Nike have foisted upon us down the years. This season’s away kit is one of the most hideous things we’ve ever worn and if your happiness is tied in with branded leisure wear I’d suggest you need to rethink your life a little bit.

This deal was about breaking us free from the shackles of the one we did with Nike under difficult circumstances. Although many complained about it as time went on, we went into that deal with our eyes open and in good faith, and the fact is we needed money for the stadium project. The problem was, of course, that short-term gain led to some long-term pain and when even the Mugsmashers were announcing £25m a season kit deals, we were left behind.

2014 was long posited as the time when things would change, when we could renegotiate and swell our coffers substantially. Obviously things have moved before that. There’s the £30m a season from the shirt sponsorship by Emirates, and now another £30m on top of that from Puma. The commercial team have faced plenty of criticism in recent times but this is why they were put in place and when you consider we can’t exactly be an easy sell at this moment in time, you have to give them plenty of credit.

These additional funds, on top of what we already have at our disposal, now make Arsenal far more powerful, both in terms of what we can do in the transfer market and how we can make the club a more attractive place to be for top players. I still don’t think we can (or should) compete with the mega-rich in terms of wages, those clubs that have owners with bottomless pockets will always find a way to pay more, but there’s no question this changes things for us.

But here’s the key: this money has to be invested in the team. There’s little point in us earning lots if the quality of the squad precludes us from competing for trophies. We’ve had to cut our cloth in recent seasons, look for bargains and alternatives, but as well as that we’ve had money at our disposal recently which hasn’t been used for one reason or another.

That’s got to change. This is a season in which we’ll finish around 20 points behind the champions and we have to bridge that gap. The first, and most obvious, way to do that is buying better players. Adding established quality and experience to the squad will make us more competitive. We all know where we’ve been lacking this season and if there’s some justification for not spending in January, there’s absolutely none come this summer.

Regardless of how we finish and where we end up in the table, I expect plenty of business to be done in the close season. While one, or two, may depart, it’s all about who we bring in and with new found financial clout to provide security, there’s got to be more Cazorlas on the menu, and nonsensical signings like Park should become a thing of the past.

The club have obviously been working hard for some time on these commercial deals, they’re complicated arrangements that take time to work out and secure, and we can only hope the diligence shown is replicated in the transfer market this summer. Arsene famously said some years ago that when you’re used to caviar it’s hard to go back to sausage. The last few years have been, in many ways, a sausage-fest.

These new deals might not see us dishing out the Beluga, but a bit of filet mignon would make a nice change. Over to you, Arsenal.

Now, where are Mah Poomas?!