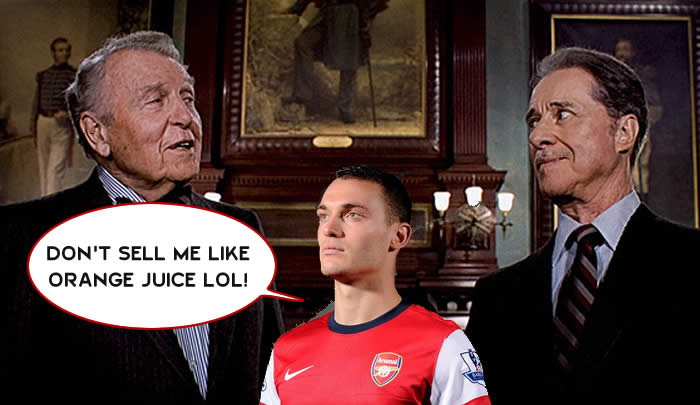 There was some football last night but I didn’t bother watching. England v Ireland at Wembley sounds kind of exciting, until you remember that watching Ireland is about as much fun a sautéing your own balls and serving them on a bed of your own crispy nipples.

I did see Shane Long’s goal but that was about it. Judging from the Twitter reaction I don’t think I missed much, even if there was the chance watch Theo and Ox (shock horror: I’ve seen quite enough of them for the time being, pre-season will do fine for me). There are more internationals this weekend, friendlies again, but I’m hoping the weather will be warm enough so I can sit in the garden and not watch them. I might do that even if it’s raining, just to make sure.

From an Arsenal point of view, well, Thomas Vermaelen has been talking about his future and he says he’s going to stay and fight for his place at Arsenal. Speaking to local press ahead of a local game for local people, he said:

I am happy at Arsenal. I didn’t play much and that did result in frustration, but things can turn around quickly. I was on the substitute bench, but I could as quickly be playing again. I’m working hard to make that happen. These are things that happen in professional football. Arsenal is a great club where there is a lot of competition.

I know I’ve spoken before about the short-termism that infects football these days. We know how quickly a player can be hyped up after a good performance or two, but just as easily he’s written off after not playing so well, or being dropped because the team needs somebody to play better. That’s what’s happened with Vermaelen. He had a poor season, no doubt about it, and he deserved to be dropped.

Just as much as Laurent Koscielny deserved to keep his place for the way he played. That doesn’t mean the guy’s Arsenal career is over, especially if he’s determined to stay and fight for his place. You could say the same about Aaron Ramsey, for example. There might, in some sections of the fanbase, have been small street parties had we (hypothetically) sold him in January (I know he signed a long-term deal back in December).

To be fair his form was poor, and many people couldn’t see him making any kind of positive contribution to our season. Fast forward to May and Ramsey’s involvement in the run-in was crucial. His energy and consistency played a big, big part in what we did in those final 10 league games, he’s won people around and given himself a platform to build on for next season.

If every club sold every player who went through a hard time in terms of form, the transfer market would be like that scene at the end of Trading Places, with managers collapsed on the floor like Randolph and Mortimer’s beleaguered trader. In some cases form falls so badly that there’s little choice but to move a player on (Djourou), or shelve him (Squillaci, Arshavin), but if the guy keeps trying, and keeps working hard to come out the other side, then you often get the benefit of it.

Ideally, Vermaelen will recharge on his summer holidays, take stock of where he is, and return a better player. I don’t think the captaincy was an excuse for him to play poorly, it just coincided with a period of bad form and, to a certain extent, it shielded him from it. When push came to shove though, he paid the price. In a summer when we’ve heard talk of how stability will be important, and that no players we want to keep will be leaving (unlike in the past), it makes no sense to me that we should write off the Belgian, especially when dropping him has created a much more healthy team environment.

Not a lot happening other than that. I’ll point you in the direction of the competition for the final time, when you can win an Arsenal Photowall.

Update: Sold out, that’s all folks.

Finally, at the end of the season we always do a round-table Arsecast, to discuss all the things, good and bad, but this year we’re going to do something a little bit different. While it will (hopefully) still be available in audio format tomorrow, we’re going to record it live tonight via the medium of a Google Hangout, so you can watch myself, Andrew Allen, Gunnerblog and Goonerholic in dimly lit rooms drinking beer/gin/babycham and chatting.

Check back later on for more details on that but all going well it should kick off at 8pm this evening. Until then (or tomorrow).

Vermaelen on his way to Barcelona + Saturday round-up