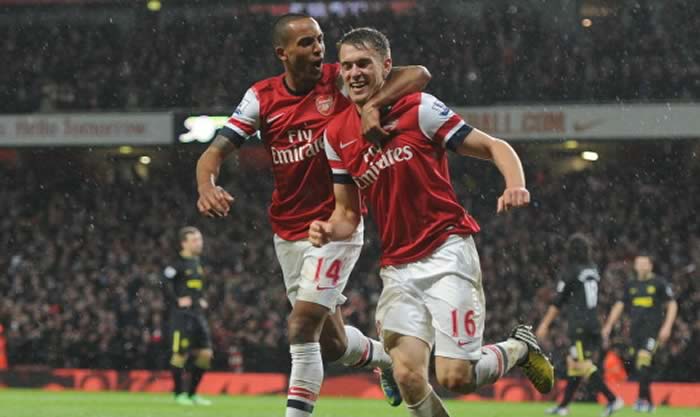 In typical Arsenal style we made it a bit difficult for ourselves, but in the end that was a game won on merit and off the back of some excellent performances.

If the opening goal wasn’t quite as early as in previous weeks, it was sufficiently timely to settle us down and give us the platform we needed. The corner routine, looking for a Mertesacker flick-on, didn’t quite work, but it confused Wigan enough that they let the ball bounce to Lukas Podolski who nodded home from just a couple of yards out.

We were full of purpose and running, putting Wigan on the back foot, and really should have been further ahead towards the end of the half when Laurent Koscielny contrived to miss from a couple of yards out after another Cazorla corner. Unfortunately for us, that miss came at a time when we went through our most careless phase of the game. Our passing was off, Wigan grew in confidence and equalised shortly afterwards.

Mike Dean had ignored a couple of Cazorla tumbles which you may or may not see given – and I’m fine with the ref playing on as long as the same standards apply to both sides. When Maloney went down under pressure from Arteta, it was frustrating to see the referee award Wigan a free kick in a dangerous position. He’s good with the dead ball, his free kick skimmed the top of the wall, just inside the post, and although Szczesny got a hand to it he couldn’t keep it out.

Some might apportion blame to Podolski for not jumping or the keeper for not saving it, but for me it was just a fantastic free kick (made more annoying by the fact it should never have been given). So, level at half-time and the visitors came out flying at the start of the second. But for a massive Szczesny save from Koné we could easily have been behind and with the momentum changed and the pressure on who knows what might have happened? The importance of that stop cannot be underestimated.

They seemed to lose some rhythm when they lost McManaman to injury and shortly afterwards we blew them away with three goals in 9 minutes. Firstly Cazorla’s wonderfully weighted ball found a perfectly timed Walcott run in the middle and the England man poked it home under the keeper. Then the Spaniard nodded a headed clearance back into the middle for Podolski to lob home the third, and when Aaron Ramsey was set free down the left (again by Cazorla), he had two players in the middle waiting for a tap-in but gave the keeper the eyes and lashed it home high into the net.

At that point it was done and dusted. Although Wigan had a couple of decent efforts subsequently, they knew it was all over, that relegation was inevitable, and the three points were going our way. The game played out to its inevitable conclusion, we went back up into fourth place and our Champions League destiny remains very much in our own hands.

We became a bit edgy and nervous at the start of the second half. But in these types of games you need to keep your nerve and continue to play like there is nothing at stake basically. When we scored the second one it was a massive blow for Wigan and they never recovered from that. It then became a comfortable win with goals three and four. It was a tight game.

And the scoreline certainly does add a bit of gloss to what was an edgy evening. I think the Szczesny save was one of those huge moments that tends to get forgotten when the final score is so emphatic, and that was coupled with desire to win that hasn’t always been present this season. Theo Walcott, for example, had the kind of game that if he could replicate on a much more regular basis would make him a far better player and us a better team. Not only was his delivery and decisiveness in the final third excellent, he coupled that with genuine hard work and commitment when we didn’t have the ball.

His goal tally this season is excellent, no question, but to see him get back, make tackles, and even shoulder people out of the way was great to see. Please do that every week. At the back Mertesacker and Koscielny continue their excellent partnership; Rosicky wasn’t necessarily eye-catching but played a big role in how we won that game, while Santi Cazorla added the creativity we needed to take the points.

I know he was credited with four assists but I’m not 100% sure you can give him the one for the Ramsey goal. It wasn’t as if he set him up with a scoring chance, and the Welshman had a lot to do after receiving the pass. I was delighted to see him get a goal, and at home, because his recent performances have deserved that. He’d had a good first half, struggled a bit in the second, but you’d have to have a cold, cold heart to begrudge him that goal based on his contribution and renaissance over the last few months.

The only downside is that we’ve probably lost Mikel Arteta for Sunday’s trip to Newcastle. A calf strain means he’s likely to miss out, but it couldn’t take the shine off what was a hugely important win. The final home game of the season ended positively, a win on the final day of the season guarantees us at least a qualification game for the next season’s Champions League and the chance to build on what has been an excellent final third to this current season.

It might not be where we want to be, but winning on Sunday gives us a much better chance of getting there than the alternative. Now it’s time to rest, recover and get focused for what’s going to be another nail-biter this weekend.