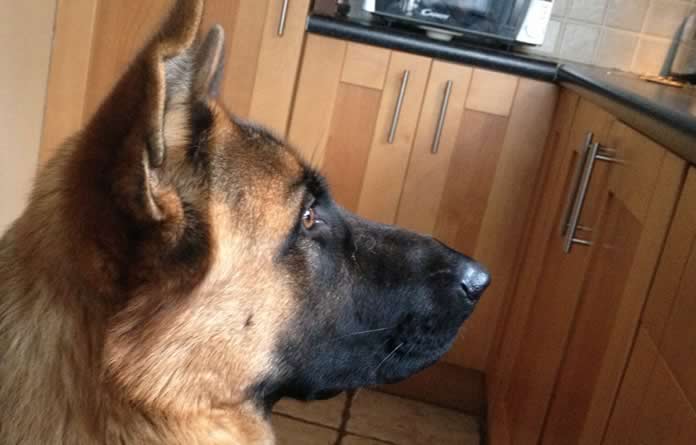 Mrs Blogs is away being all literary in the wesht of Ireland, so it’s just me and the dog. He let himself to my room to wake me up this morning through the medium of face slurps and headbutts. Quite an effective technique for getting somebody out of bed, so if you’re ever struggling it’s one to bear in mind.

[Please note: this may not be appropriate in some, if not most, circumstances]

I am determined to get through this blog without any mention of that bloke that I’m sick of talking about and hearing about, but given Arsene’s press conference yesterday was chock-full of questions about him, that may prove difficult. Still, I shall do my utmost.

The boss says he hasn’t yet decided on who’s going to play up front tomorrow, saying:

It’s something I have to weigh up, who will play through the middle. It’s not decided yet but in the next 48 hours it will be decided. We’ll keep exactly the same structure in our team and the same football. The personnel will be a bit different. We’ll be less strong in the air but we’ll try to play with the characteristics and the personality of the player who will replace him.

While some people might not care too much about Giroud’s absence from the top end of the pitch, it may be felt more keenly at the back. The Frenchman has been, in my opinion, part of the reason why we’re not as shaky from set-pieces any more. He wins a lot of headers in our box, and we’re facing a team that has scored more goals from corners than any other this season. We’ll have to see how that plays out, but obviously the key decision is who to play in his stead up front. I’ve been over that already this week so without any further clue from the boss we’re still none the wiser.

He is looking to improve our record against top four teams though:

I personally believe we have been remarkably consistent against the teams who do not fight for the championship. Last year we did well against top teams, but this year we have not. I felt it was a lot down to the fact we renewed the team and had a big lack of confidence for a while in the season. Now we have a good opportunity on Sunday to show that we have made that step so let’s take it.

Our record thus far against those above us has been poor. Just one win (Sp*rs), a draw and a defeat to Man City, two defeats by Chelsea, a loss against United at Old Trafford, and a loss to Sp*rs in the return fixture at their place just a few weeks back. That said, this is our best run of form in the season thus far, there’s a real need for us to get something from the game, so let’s hope we can continue as we have done in recent weeks. I’d happily take another poor performance as long as get something out of the game.

Above all we need to keep the ball. If we have the ball, we’re definitely going to hurt them. We’re a team that keeps possession well and knows how to hurt the opposition.

I love Santi, what a fantastic player he is, but I have to take issue with this a little bit. We had plenty of possession against 10 man Fulham last Saturday. At one point it was 91% in our favour, but the problem wasn’t that we lacked the ball, it was that we didn’t do very much with it when we had it.

United will be quite happy for us to pass it around in front of their back four, but if there’s no penetration then we’re not going to hurt them at all. Fulham looked dangerous on the counter last weekend, United are expert at that kind of play, so while having the ball is going to be a factor, it’s more down to what we do with it. This is why the manager has to be thinking about how to fit someone like Rosicky or Oxlade-Chamberlain into the team, a player who can drive us forward and make things happen.

Cazorla himself is one of those players, he’s been relatively quiet for a few games, and it’d be good to see him burst into life again tomorrow. There was one moment in the game against Fulham when a quick shot might have caused them problems, instead he got sucked into the tippy-tappy and played a cute pass on the edge of the box which they cleared. Sometimes, as Frank Lampard’s career has shown, there’s a need to just have a pop from distance and see what happens. Hopefully, Arsenal will be more inclined to do that on Sunday.

Right, time to take this wolf to the park, back tomorrow with a full preview of the game. Until then.